5G sales in the US reach the halfway point

US wireless network operators reached an important milestone during the past few months: More than half of all phones sold since the fourth quarter have featured 5G technology.

The statistic, from research and consulting firm Counterpoint Technology Market Research, reflects the desire by wireless network operators like AT&T and Verizon to get 5G-capable devices into the hands of their customers, as well as the desire by vendors like Samsung and Apple to goose sales of their gadgets with fancy new technologies.

To be clear, though, the sale of 5G phones is just one piece of operators' overall 5G equation. In order to make money from 5G, US operators generally are encouraging customers with 5G phones to also upgrade to more expensive unlimited plans.

Overall, Counterpoint reported that handset vendors have so far sold a combined total of over 53 million 5G-capable devices into the US since the launch of 5G in the country in 2019. 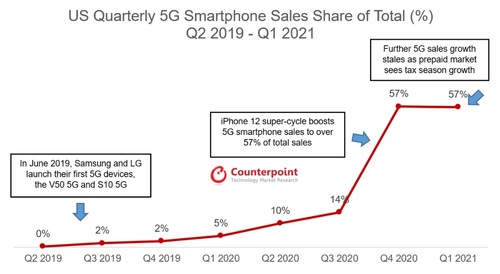 Counterpoint found that the percentage of 5G phones in quarterly sales among Americans rose from 0% in the second quarter of 2019 to 57% in the fourth quarter of last year. Click here for a larger version of this image.
(Source: Counterpoint)

Counterpoint noted that sales of 5G phones during the past three months slowed slightly due to the typical post-holidays malaise as well as a rise in sales of cheaper, 4G prepaid phones following the disbursement of the US government's COVID-19 stimulus checks.

But that slowdown is temporary, according to the firm's analysts.

"By the end of Q4 2021, we estimate that 5G smartphone sales will reach 80% of total sales," forecast Counterpoint analyst Jeff Fieldhack. He added those sales ought to be buoyed by the decline in US phone average selling prices from over $1,000 to around $800 today.

However, those sales may be impacted by a variety of factors including the exit of LG from the global smartphone market and the ongoing global chipset shortage. "Inventory has been very tight, but supply has been able to meet demand so far," warned Counterpoint's Hanish Bhatia of the shortages. "Bigger OEMs [original equipment manufacturers] such as Apple and Samsung seem to be less affected, but smaller Tier 2 and Tier 3 OEMs may feel the impact to a greater extent going forward."

The US market for 5G is somewhat unique given operators' early embrace of 5G in the millimeter wave (mmWave) spectrum bands (though new data shows that most 5G phones in the US connect to mmWave 5G less than 1% of the time). Although a growing number of operators in countries ranging from Japan to China to Australia have indicated interest in mmWave, phones with mmWave aren't terribly common. For example, the Global Certification Forum (GCF) recently reported that just 21% of the different 5G device types it certified in 2020 could access mmWave 5G frequencies.

In other Counterpoint phone data, MediaTek is expected to retain its new position as the world's biggest smartphone chipset vendor in 2021, but rival Qualcomm is expected to maintain its position as the biggest silicon vendor for 5G. More broadly, the firm reported that Apple leads the global $100 billion smartphone industry, followed by Samsung, Oppo, Vivo and Xiaomi.