After several rounds of financial punches and counterpunches spanning a day-and-a-half, TiVo's offer of $18.5 million, including $17.4 million of cash, was designated as the winning bid for the assets of MobiTV, the bankrupt supplier of video software and infrastructure.

TiVo, now part of Xperi, will come away with the full assets of MobiTV that were up for auction, including MobiTV's intellectual property/patent assets and its "going concern" business. 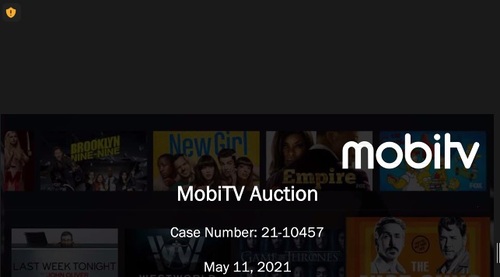 Auction participants and observers spent many hours on Zoom and gazing into a screen like this during the lengthy MobiTV auction process.

TiVo overcame a persistent string of rival bids from UK-based Amino Technologies, in partnership with a joint venture of Roku and RPX. The last gasp bid from that group was $18 million, comprised of $13 million (including $11.7 million of cash) from Amino for MobiTV's going concerned business, combined with a $5 million cash bid for the IP/patent assets submitted by the Roku-RPX joint venture. That combined offer has been designated as the backup bid for MobiTV's assets.

Update: As for next steps, TiVo's bid and asset purchase agreement will now go in front of the court for approval, to be followed by other closing conditions and regulatory approvals. A court hearing on the matter is currently scheduled for May 21, at 2 p.m. EST. According to the notice of auction results posted today with the US Bankruptcy Court for the District of Delaware, TiVo is obligated to close no later than 4 p.m. EST on June 1, 2021.

In addition to expanding the patent portfolio of TiVo/Xperi, TiVo said the acquisition of MobiTV's assets, which include transport rights and white label app-based pay-TV capabilities, will also extend TiVo's existing IPTV service capabilities. TiVo/Xperi expects the acquisition to be accretive starting in 2022.

"The acquisition of the MobiTV assets immediately expands our capabilities and the addressable market for our IPTV solutions, helping to secure TiVo's position as a leading provider of Pay-TV solutions," Jon Kirchner, Xperi's CEO, said in a statement.

Other qualified bidders for the MobiTV assets heading into the auction included TV2 Consulting, Vobile Group, Aire and Streaming TV Acquisition, a group of National Cable Television Cooperative (NCTC) member companies that participated in the auction separately from the NCTC organization itself. An industry source familiar with the situation told Light Reading that Streaming TV Acquisition was made up of a group of existing MobiTV customers led by Comporium Communications, with financial backing from Cable One/Sparklight and Buckeye Cablevision.

Per the terms of TiVo's bid, it appears that at least 50 MobiTV employees will be transitioned to the new company. Amino's terms had raised that minimum number to 60.

The MobiTV assets should fit with the combined business of TiVo and Xperi, which covers both intellectual property and patents along with a portion that provides products and services to small and midsized cable operators and telcos  the same kind of group that MobiTV was largely focused on.

MobiTV filed for voluntary Chapter 11 protection in early March. T-Mobile, which used MobiTV's platform to power its now-defunct TVision OTT-TV service, provided $15.5 million in debtor-in-possession financing to keep MobiTV operating through the bankruptcy process. That DIP financing prevented MobiTV's platform going dark and, therefore, ensuring its partner's pay-TV streaming services stayed alive during the process, but it appears unlikely that any of that financing will be recovered.