Streaming services tend to use a blend of free trials, pricing promotions and no-contract set-ups to get subscribers in the door. But those same tactics also make it easier for consumers to pop in, browse around, maybe binge on a series, and then leave it all behind.

Churn is a challenge for streaming services of all shapes and sizes, but understanding why consumers churn and what can be done to prevent them from exiting has become a science of its own. Once you get them into the building, how do you keep them there?

One company that's tackling that issue is Symphony MediaAI, which is pitching a new churn-busting platform, called Revedia Engage  Churn Solution, that taps into the AI and machine language technologies it has already applied to markets such as healthcare, retail and, to a lesser degree, the media and entertainment sector.

Estimates on the degree and level of churn that streaming services face month to month is all over the map, but Smith says it can be high as 41%.

A new study from Interpret found that only 20% of streaming subscribers are content to stay with their current providers, with 13% saying they've canceled after watching a selected video series. An earlier Parks Associates survey from around the Q3 2020 timeframe found that roughly 25% of streaming subs are "hoppers" that switch between services and re-subscribe multiple times, with 17% having canceled five or more services within the past 12 months. About one-quarter of those surveyed in the Parks study left because they finished watching a show they liked. A similar percentage of consumers churned out to reduce expenses, and 22% left after a promotional price or offer ended. 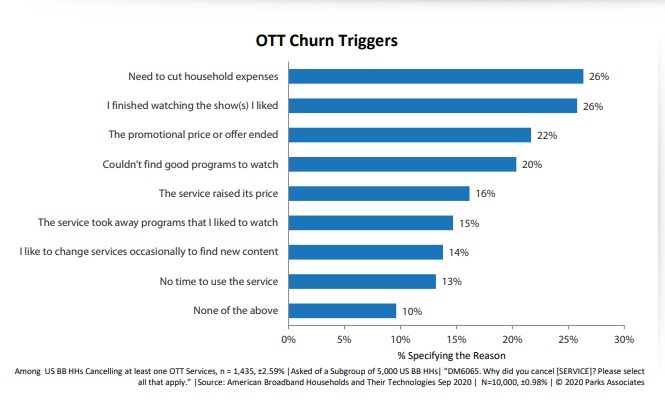 Click here for a larger version of this image.
(Source: Parks Associates)

Gathering, normalizing and analyzing the data

Smith says larger streaming services understand the issue and are trying to address it. But many others have access to lots of data about what subs are watching and which content is doing well among specific age groups and demographics but don't have the knowhow or tools to interpret that data or to apply it in a way that results in strategies and tactics aimed at cutting down on churn.

Symphony MediaAI targets the issue by analyzing that data and focusing on what could lead to churn, and which specific customers are most prone to it, or might be on the cusp of leaving. Those factors could include anything from problems logging in, a credit card about to expire, the end of a popular TV series, or a customer who is nearing the end of a free trial that has spent nearly no time trying out the service.

Smith says Symphony MediaAI tries to resolve that by pairing its algorithmic engine to the data of the partner to come up with a "proscriptive analysis" that includes options and tactics that can be used to retain customers before they pull the trigger. That analysis then prepares some recommendations on how to keep those customers. For example, it could propose offering a short-term discount to a customer who is about to the end of a free trial and seems likely not to be a strong candidate to convert to a paying customer.

Symphony MediaAI's churn-busting system attempts to derive its accuracy by focusing on subscriber-generated data, including account and viewing history, along with the partner's video library and metadata, and mapping and normalizing that data with its AI/ML engine. 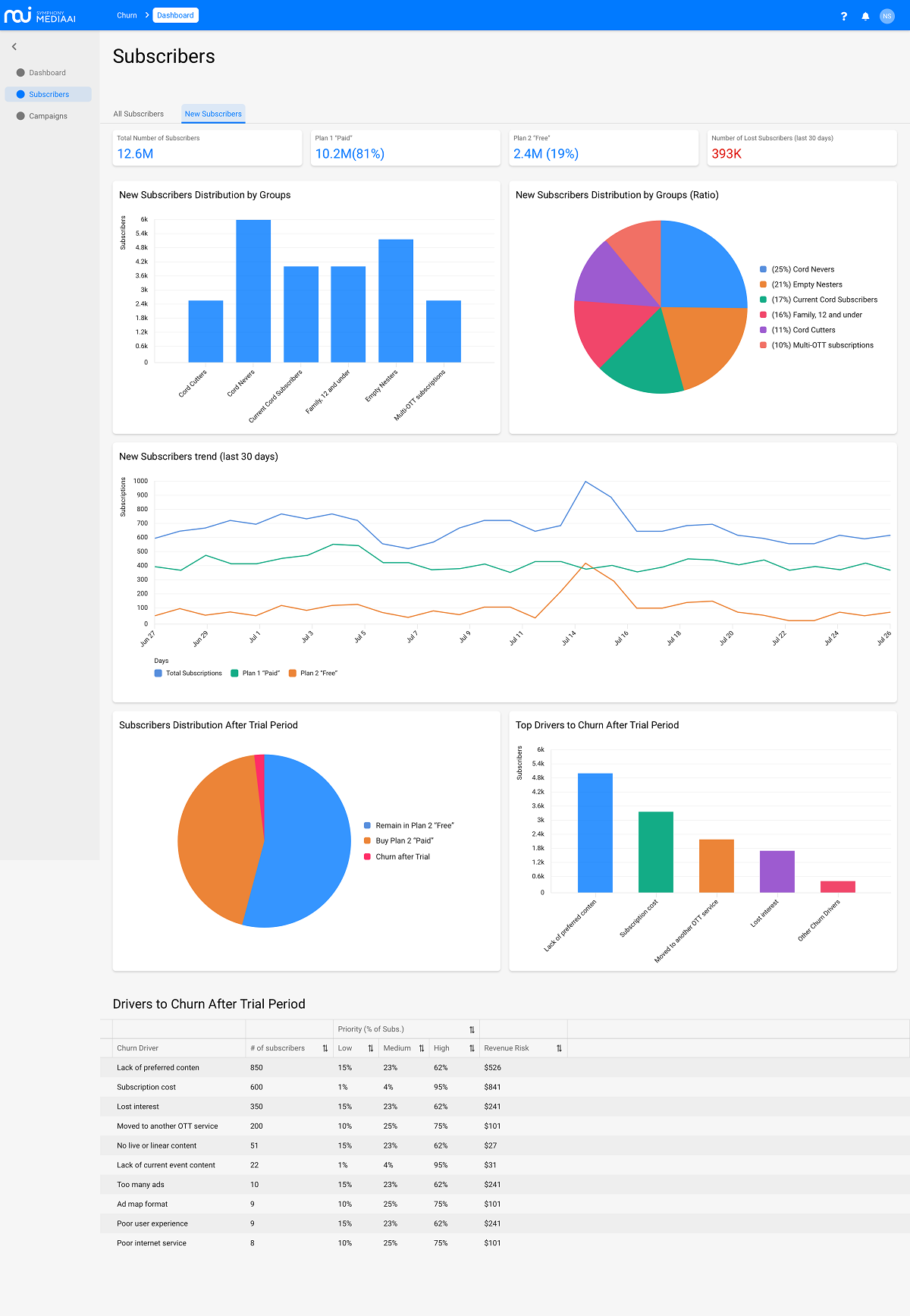 Symphony MediaAI combines partner data with its own AI/ML engine to get a fix on churn trends and propose ways to keep churn in check.
(Source: Symphony MediaAI)
Click here for a larger version of this image.

"That all goes to play in our churn prediction," said Joe Mancini, Symphony MediaAI's head of product. "Once we have that normalized and understand the data, we're constantly updating that real-time."

That work results in an ever-evolving generation of "churn groupings" based on certain characteristics of specific customers and ranks them on their potential churn risk. An initial analysis of that data typically results in six to 12 churn groups, and churn ratings of the customers that fall into those specific churn groups.

"Those groupings will constantly change and deviate into new groups," Mancini said. "But it's understanding those characteristics that link one subscriber to the next to be able to get that accurate prediction."

OTT players are of course well aware that not all customers are the same, with some more likely to churn than others. Michael Schwimmer, EVP and group president of Sling TV, acknowledged at this week's StreamTV Show that churn "comes in different flavors" as some leave and come back, while others are much more loyal. But that's only two favors; Symphony MediaAI claims its analysis is much more specific and granular.

While larger streaming services have data scientists in-house to study and explore the churn issue, Symphony MediaAI hopes to take things several steps beyond what companies are doing internally.

Symphony MediaAI believes its focus on video streaming service churn is a relative greenfield opportunity, though companies such as Cleng, Wicket Labs and Whip Media share some similar characteristics.

The company has no announced partners for the new churn product, which was launched in late 2020, but says several "name brand services" are already on board with proof-of-concept tests. Others are evaluating whether to engage in further work. Examples of companies that use other data analysis products from the company or are cited on its website as customers include NBCU, Discovery Communications, Sling TV, AT&T, National Football League and Outdoor Channel.