Dish Network's pay-TV business was almost a wash in the third quarter of 2021 as gains at Sling TV nearly covered the losses at Dish's declining satellite TV business.

The satellite TV sub losses in Q3 were a bit worse than the 115,000 expected by analysts. Dish's traditional satellite TV base is now shrinking at a rate of 6%, accelerating from a decline of 5.4% in the prior quarter, according to MoffettNathanson analyst Craig Moffett. With Sling TV results included, the rate of video subscriber losses dipped to 3.9% in Q3. 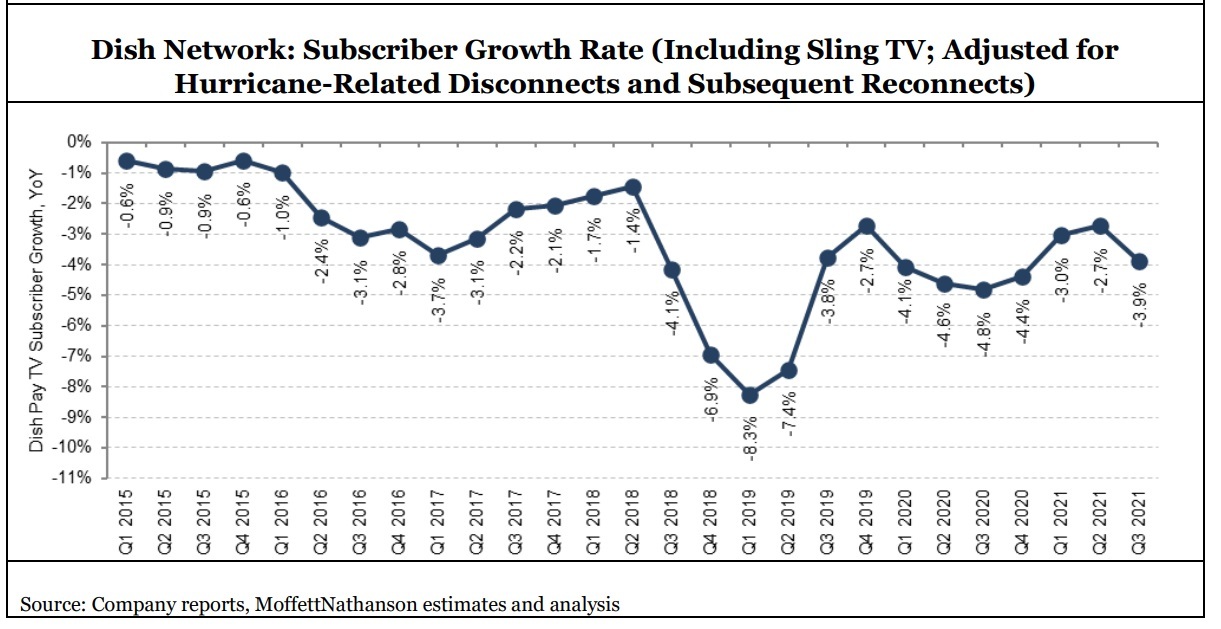 Dish's strategy to keep satellite TV churn in check by focusing on rural areas is working, but sub losses are still re-accelerating, Moffett explained in a research note. Dish has raised prices sharply twice this year to help offset that acceleration.

Dish, of course, has its own streaming option to bring forth: Sling TV. "Sling TV is at least stable," Moffett wrote, noting that Sling TV's 117,000 subscriber additions in Q3 handily beat expected adds of about 45,000.

"The vMVPD [virtual multichannel video programmer distributor] segment hasn't turned out to be the growth business it was originally hoped to be  it remains smaller than it was in 2019  vMVPDs simply aren't where cord-cutters are going anymore. But, as other vMVPDs have steadily raised prices, Sling has solidified its position as the cheapest full service live-streaming option."

Meanwhile, Dish's retransition battles with Tegna and Sinclair have continued on, with Sinclair stations staying on Dish thanks to a series of short-term renewals. There's no end in sight in the Tegna-Dish battle. "I don't think there's serious negotiation going on," Charlie Ergen, Dish's chairman said, when asked about the spat with Tegna. "I think we remain far apart."

Meanwhile, Dish subs in certain markets lost access to streaming options for local broadcast TV signals following the shutdown of Locast and its subsequent financial settlement with major US broadcasters.

Ergen believes that heavy retransmission fees could lead to the demise of certain broadcasters. "The end result is...if you fast-forward a decade, I don't know if networks exist, except maybe for local news, because they're pricing themselves out of the market. Generally you're looking at retrans as just being a tax on the American consumer right now," Carlson added.

Ergen also stuck to his knitting on persistent rumors that Dish and DirecTV could eventually combine. He again held that a merger of the two is "inevitable" given the status of a pay-TV market that now has a wide range of competitive streaming options.

The big recent change is that AT&T has spun off DirecTV and the rest of its pay-TV business in a transaction with TPG. "I assume they see the logic there as well," Ergen said.