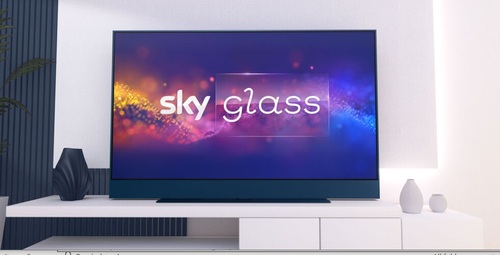 Sky partnered with Map Project Office on the design of Sky Glass, which comes out of the chute equipped with a 4K Ultra HD Quantum Dot screen, 10-bit HDR and Dolby Vision.
(Image source: Comcast/Sky)

Three models of Sky Glass TVs – all of which will be equipped with 4K, Dolby Atmos sound (six speakers built in, obviating the need for a separate soundbar) and Wi-Fi connectivity – will go on sale in the UK on October 18 and become available to Sky's other European markets in 2022.

Billed as the first TV to be CarbonNeutral-certified, Sky Glass includes free delivery with 100% recyclable packaging, with Sky offering to pick up the discarded packaging and recycle it. Sky will sell the sets at its various shops, pods, hubs and "pop-up" centers in the UK, and will also sell the models at a new flagship store coming to Westfield London.

None of the price points for the initial set of Sky Glass TVs scream "bargain." But the Sky Glass TV models represent a 30% savings compared to smart TVs with comparable tech and feature set-ups, Stephen van Rooyen, Sky's EVP and CEO for the UK and Europe, proclaimed at an unveiling event held today in London.

But rather than just selling Sky Glass sets at a fixed retail price, Sky has added a smartphone-like wrinkle by giving the company's pay-TV subs the option to buy the sets in monthly increments. And, taking a page from the company's Sky Mobile Swap program, Sky Glass buyers will have the option to swap out their sets and upgrade to a new model later on.

"You can now buy your TV just like you buy your mobile phone," Dana Strong, CEO of Sky Group, said.

Most consumers don't think twice about buying a phone on a monthly contract, van Rooyen added later, noting that he believes Sky is the first TV provider in the world to offer an exchange program.

To support existing, non-Sky Glass TVs, the company also announced a "whole home" program that gives customers the option to lease a Sky Stream Puck for £10 (US$13.62) per month that's outfitted with the same software and user interface.

The intro of Sky Glass enters the picture amid growing evidence that Sky's parent, Comcast, is nearing the launch of a lineup of connected sets under the XClass TV brand in the US and, possibly, in Canada. Combined, those products will enable Comcast and Sky to enter a crowded, competitive smart TV market that features an array of TV makers and software companies, including Samsung, LG Electronics, Vizio, Roku and Google.

"Comcast has been in the TV business for over 60 years and there have been a few big moments with the potential to be transformative," Brian Roberts, Comcast's chairman and CEO, said at the Sky Glass unveiling. "And you know what? This could be one of them."

Underpinned by a 'global' tech platform

Sky Glass TV is powered by a "Global Technology Platform" that is rooted to Comcast's flagship pay-TV platform, X1, and Xfinity Flex, a streaming product for Comcast's broadband-only customers, as well as software used in Sky products.

That platform is now the foundation for all of Comcast's products, spanning hardware, voice search, discovery and various applications.

"The magic of Sky Glass isn't just this stunning TV. It's what's behind the glass that is truly game-changing," Roberts said, estimating that about 75 million of the company's broadband and streaming devices now run on this global platform.

Strong noted that the platform powering Sky Glass can be deployed by other operators. Foxtel, a top pay-TV provider in Australia, is Sky's first syndication partner. Comcast already has X1 syndication deals with a handful of North American operators – Cox Communications, Rogers Communications, Shaw Communications and Videotron – but has yet to announce any smart TV deals with that group.

Among the new features for Sky Glass is a "Playlist" that enables viewers to tag favorite shows and movies from Sky's live and VoD service, as well as from third-party streaming services such as Netflix, Amazon Prime Video, BBC iPlayer and Disney+. The idea is to assemble all of that content in one place rather than requiring users to move from one app to another to access a playlist of their favorite shows.

Stirling also offered a preview of features that will be added to Sky Glass next spring, including support for video conferencing and, thanks to a partnership with Microsoft, the ability for viewers to sync up viewing of TV shows, sporting events and movies with other people via an integrated on-screen video chat window. Also on the roadmap are games that can be controlled with gestures and a home fitness product being developed with a company called WithU.