SeaChange zeroes in on the shift to streaming

Even as it continues to support cable operators with on-premises video products, SeaChange International is going big on streaming with a new cloud platform that targets both service providers as well as content owners that are eager to build and deploy their own direct-to-consumer video products. 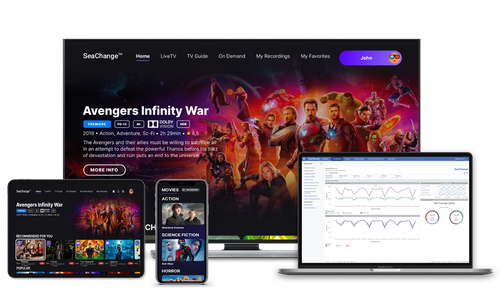 That approach will enable SeaChange to "remove dependencies" from the overall product/stack and allow the vendor to have full control of how that platform is developed and how it is priced, according to Chris Klimmer, SeaChange's SVP of global sales and marketing.

Klimmer said the scope of StreamVid spans content ingestion, video encoding, digital rights management, packaging, a customer relationship management system (to manage content rights, entitlements, device registrations, etc.), and apps for the aforementioned streaming platforms. StreamVid also ties in an analytics/data system that, for example, can draw conclusions on what content is gaining the most traction and help shape promotions and outreach tailored for individual users or a specific segment of the customer base.

StreamVid, which is hosted by AWS, also represents a new element in SeaChange's restructured product portfolio. Other pieces of that puzzle include a legacy, on-premises software products for broadcast TV and VoD, QAM-based video in use by cable operators, and an advanced ad-tech platform that can be used for both traditional broadcast TV and OTT-delivered streams. But streaming is going to be the core focus of the company.

"SeaChange has repositioned its strategy and technology to capture the explosive growth in all things streaming," Robert Pons, Robert Pons, executive chair, principal executive officer and chairman of the board at SeaChange, said last month on the company's fiscal Q1 2022 earnings call.

Klimmer said SeaChange will largely target StreamVid to content owners as well as tier 2/3 service providers that intend to outsource their TV business to technology vendors using a cloud- and SaaS-based platform rather than a heavier, on-premises system. The leaner SaaS model has some minimum charges and some fixed costs for SeaChange, but "the goal is to remove the barrier to entry into the [streaming] market," added.

While the direct-to-consumer streaming market is led by huge players such as Netflix, Amazon, Disney, NBCU, ViacomCBS and WarnerMedia, SeaChange is seeing opportunities emerge with smaller, niche content players, including some sports bodies/organizations, that are preparing to pursue the DTC model domestically or internationally, Klimmer said.

SeaChange, of course, has no shortage of companies that are competing in the streaming tech sector. Though many rely on third-party partners for certain pieces of the puzzle, a few examples of companies SeaChange will certainly tangle with in the market include Kaltura, MediaKind, Harmonic, TiVo and Minerva Networks. Klimmer said SeaChange will try to stand apart a bit by not just selling technology but by also "enabling business models" through guidance and consultancy assistance.

SeaChange has not announced any deals for StreamVid, but Pons told Light Reading that the company has deployment commitments in hand.

The introduction of StreamVid and the restructuring of SeaChange's product set also enters the picture after a lengthy period in which the company has sought to pivot away from hardware and toward software-based products and business models, and to complement its historic focus on cable operators and other distributors by entering new markets such as streaming.

That change in product structuring also comes about six months after former president, CEO and board director Yossi Aloni left SeaChange to pursue other interests. Pons, who took over the operating duties at SeaChange following Aloni's departure, said the process of finding a new CEO is ongoing.