With the holiday buying season fast approaching, Roku has introduced a pair of new 4K-capable streaming sticks along with an operating system refresh that will be phased into the market in the coming weeks.

On the device side, Roku unveiled the Streaming Stick 4K for $49.99 and the Streaming Stick 4K+ for $69.99. The latter in that duo bundles in the Roku Voice Remote Pro, a rechargeable, hands-free voice remote that typically sells for about $20 on a standalone basis. Both models will hit shelves and Roku's online store in mid-October.

According to Roku, the remodeled streaming sticks are more powerful than their predecessors. The Roku Streaming Stick 4K boots up 30% faster than the last-gen model, and also supports the 4K, Dolby Vision and HDR10+ formats, a redesigned, long-range Wi-Fi receiver, and compatibility with Amazon Alexa or Google Assistant. At $49.99, it compares to Amazon's Fire TV Stick 4K, which, at last check, is being sold at a promotional price of $34.99, $15 off its regular price of $49.99.

Roku also announced a refresh of the 4K-capable Roku Ultra LT streamer equipped with a faster processor, more storage and a Wi-Fi radio that, the company said, provides up to 50% longer range than the last model. The new Roku Ultra LT will be sold exclusively through Walmart for $79.99.

Roku is priming the pump by bundling in 30 days of HBO Max, WarnerMedia's new premium SVoD streaming service, when customers buy a new streaming device between October 1, 2021, and January 14, 2022.

Time will tell if the refreshed product lineup will goose sales heading into the holidays. In Q2 2021, Roku's player-related revenues clocked in at $112.8 million, up just 1% year-over-year. Roku also lamented tight component supply chain conditions and shipping constraints in the quarter. Roku did not raise prices on players to compensate, resulting in negative gross margins in the period.

Roku also made some moves on the platform side of the business, introducing the 10.5 version of the Roku OS. 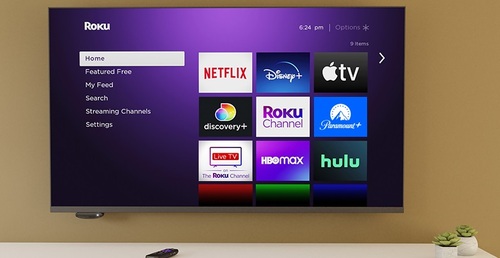 Roku's new 10.5 OS will be baked into its new fall product lineup and will start to be rolled out to its existing base of players and integrated Roku TVs in the coming weeks.
(Source: Roku)

The new OS, which will be included in its new streaming stick lineup and be rolled out to existing streaming players and integrated Roku TVs in the coming weeks, will simply give access to The Roku Channel's Live TV Channel Guide by letting users add the channel on the home screen. The 10.5 OS will also expand the number of channels supported by voice commands for direct playback, and introduce voice search support for music, podcast and video podcast playback.

Meanwhile, Comcast is reportedly poised to enter the smart TV game with a range of "XClass"-branded TVs made by China's Hisense and powered by a version of Comcast's software platform that is used today for its X1 pay-TV service and its Xfinity Flex streaming/smart home product for broadband-only customers.