Roku shares were down more than 11% Wednesday after MoffettNathanson analyst Michael Nathanson cut the stock to "Sell" over concerns that revenue and earnings estimates for the streaming giant "are just too damn high."

He's particularly concerned that Roku will need to drive more impressions for advertising VoD (AVoD) inventory as revenue growth from subscription-based VoD services start to slow. And he's not optimistic that Roku will be able to pull it off.

"Using a series of comparable data points and third party research, it appears that Roku will need to monetize an absurdly high portion of long-tail AVOD impressions to come even close to Street numbers, which we think will be a challenge given rising competitive pressures in TV OEMs and operating systems," Nathanson explained in a research note.

CNBC's Jim Cramer responded to Nathanson's downgrade, and generally agreed with the assessment. "Every time I look at Roku, I want to sell it," Cramer said this morning.

Nathanson signaled some of those concerns in September, holding that Roku's Platforms business (which includes advertising and OS licensing) and its distribution deals and obligations with Disney+ and other premium SVoD services could create "headwinds" down the road for Roku.

Though revenues allocated to performance obligations from content distribution agreements have jumped since Q2 2020, Nathanson expects those to moderate, noting that there were shades of a slowdown already underway in Q3 2021. He believes this deceleration in new performance obligations suggests a potential slowdown in direct-to-consumer (DTC) subscriptions/purchases and media and entertainment and promotional spending on the platform.

Nathanson estimates that domestic subscribers for major DTC platforms rose by 7.8 million in Q3 2021, a "notable slowdown" from double-digit quarterly subscriber additions over the past couple of years.

DTC sub growth is slowing after a pandemic-marked 2020 that saw consumers gravitate rapidly to SVoD services along with a wave of new premium streaming services enter the market, including WarnerMedia's HBO Max, NBCU's Peacock. Meanwhile, that piece of the market is going through a consolidation period with the proposed combo of Discovery and WarnerMedia and the potential sale of Starz.

That said, Nathanson expects advertising to be the primary driver of revenues in the Platforms segment, but stressed that growth in that area "is also up for debate" depending on the success of The Roku Channel, the company's ad-supported streaming aggregation service, and what Roku can capture from third-party services on the platform. He estimates that The Roku Channel contributes about 60% of Roku's video ad revenue, and 40% coming from third-party services on the platform.

"While this exercise relies on many assumptions, our takeaway is that it is challenging to see how Roku can achieve our prior (and consensus) revenue estimates in the out-years," Nathanson wrote.

Citing Nielsen data, Nathanson said Pluto (now part of ViacomCBS) generated the most streaming minutes among standalone AVoD services in Q3, while Tubi had about 70% as many minutes, and the Roku Channel had about 60%. However, he assumes that Roku can monetize at a higher rate due in part to its large base of logged-in users and access to better first-party data for ad-targeting purposes. 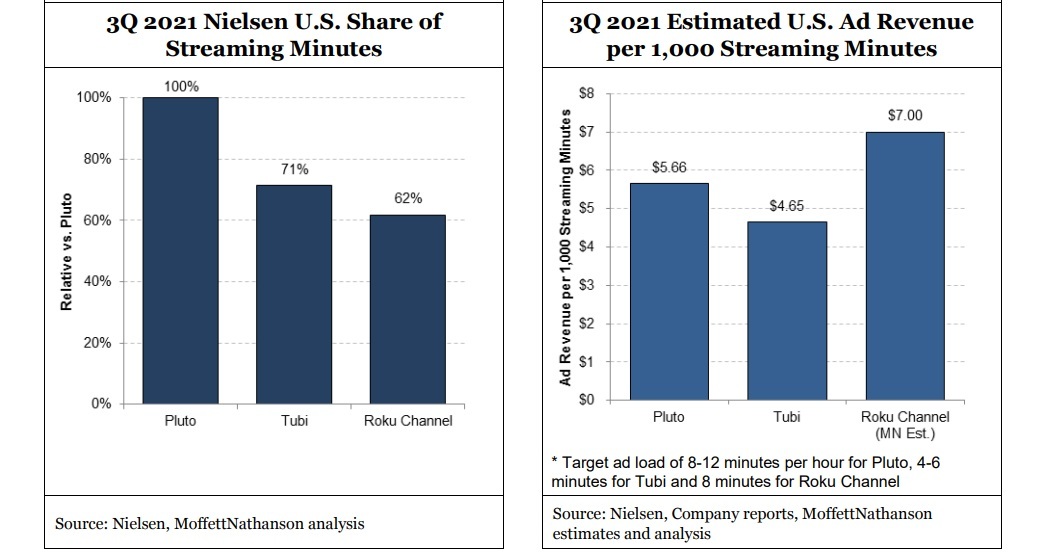 Nathanson does offer some caveats that could play in Roku's favor.

Among them, he notes that the AVoD market could continue to outperform expectations amid the ongoing dip in traditional TV ratings and that Roku might perform well internationally. He also allows that media and entertainment and content distribution spending could grow faster than anticipated if streaming services decide to amp up promotions to reduce churn even as overall DTC subscriber growth slows down.

He also recognizes that Roku could become an M&A target of a TV manufacturer, media or tech company, given the company's strong smart TV OS capabilities. In fact, Comcast, which is now in the US smart TV game with a new family of XClass TVs, was rumored to have had interest in making a play for Roku as it explored ways to accelerate and scale its overall streaming strategy.

But Nathanson views M&A as a long shot result due in part to Roku's premium valuation alongside a competitive landscape that is seeing companies build their own operating systems or team up with other OS platforms.