The process took about nine months to complete, but Roku and Charter Communications have finally found common ground and have locked in a new deal that reopens access to Charter's pay-TV streaming app on the Roku channel store. 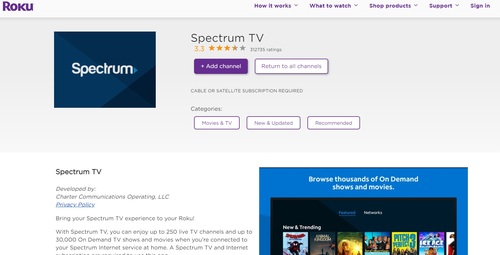 Roku blocked access to Charter's Spectrum TV app in December 2020 after the two sides failed to strike a new distribution agreement. However, Charter customers who had already downloaded and installed the Spectrum TV before the last deal expired did not lose access to the app during the months that Roku and Charter took to hammer out this new agreement.

Charter and Roku did not announce terms of the new agreement, only saying that it was "mutually beneficial" to the companies.

"Charter Communications and Roku have reached a mutually beneficial agreement to renew distribution of the Spectrum TV App (STVA) on the Roku platform," the companies said in a joint statement. "As a result of the renewal, the Spectrum TV App is now available for download from the Roku channel store. We are pleased to renew our partnership and offer this great streaming experience to our shared customers."

The new deal ensures that Charter's app is offered on Roku's widely used platform, complementing Spectrum TV's reach on a range of other streaming platforms, including Apple TV (tvOS), Samsung smart TVs, certain Xbox consoles and iOS and Android mobile devices. Together, those platforms also give Charter a way to provide access its pay-TV services without requiring a traditional cable operator-supplied set-top box.

That months-long skirmish represented another high-profile streaming distribution battle centered on Roku, a company that now has about 55.1 million active users and a platform that generated about 17.4 billion streaming hours in Q2 2021 alone. Among recent battles that have since been resolved, Roku butted heads with WarnerMedia over the HBO Max service and with NBCUniversal over the programmer's new Peacock streaming service, and had a brief run-in with Fox in early 2020 just prior to Super Bowl LIV.