Something old is new again, as DirecTV Stream today becomes the brand for all things streaming at DirecTV, the new standalone video services company formed from its recent separation from AT&T.

DirecTV Stream, which succeeds AT&T TV and other streaming services formerly under the AT&T umbrella, is touting its entry into the market via a new marketing and ad campaign that attempts to spread the word about the name change and lure consumers in to give the streaming service a shot.

The TV-led ad campaign, which stars tennis great Serena Williams and focuses on the service's blend of live TV and VoD services, boots up today and will run until "early 2022," DirecTV said. 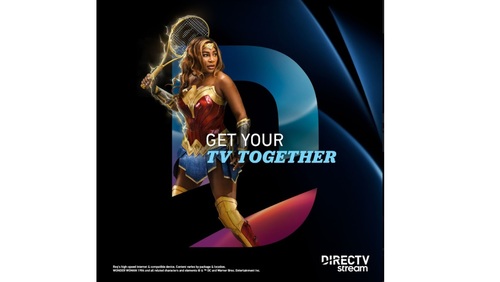 The introduction of the rebranded DirecTV Stream comes less than a month after AT&T spun out DirecTV and the rest of its US and Puerto Rico pay-TV business, including satellite and IPTV, into a separate company. Post-deal, AT&T owns 70% of DirecTV's common equity, and TPG owns 30%.

The challenge now is for the new DirecTV to survive, let alone thrive, in a shrinking pay-TV market, and keep its eye on the ball despite persistent rumors that it may someday be combined with Dish Network.

While DirecTV Stream finally simplifies a formerly confusing set of services and packages that previously were under AT&T, the rebranded offering doesn't appear to be bolting from the blocks with any mind-blowing discounts or promotions. However, all DirecTV Stream packages do not require a contract.

DirecTV Stream's entry-level "Entertainment" package with 65-plus channels and a VoD library, sells for $69.99 per month, while the high-end "Premier" package bundles in a lineup of more than 140 channels, a VoD library, HBO Max, Cinemax, Showtime and Starz, for $139.99 per month. DirecTV Stream's mid-range tiers; "Choice" and "Ultimate;" toss in three free months of HBO Max.