Plex has raised $50 million in growth equity that will be used to expand the reach and capabilities of a streaming platform that today features a large array of free, on-demand content and live TV streaming channels.

Existing Plex investor Intercap headed up the $50 million growth equity round. The financing includes about $15 million in new capital for Plex for areas such as engineering, product and content, with the rest to be used to purchase shares and options from employees and shareholders. 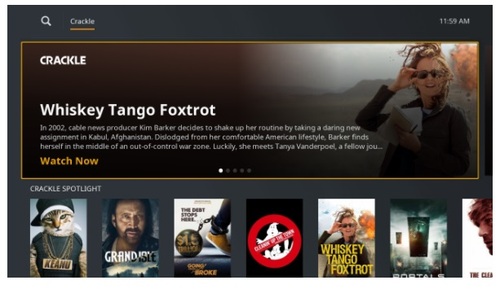 Crackle, a free, ad-supported streaming service, is among the OTTs that have been woven into Plex's platform. This screenshot is an example of Plex on Roku's platform.
(Source: Roku Channel Store)

Plex, a company founded in 2009, said it will use the infusion to fulfill a plan to be a "one-stop shop" for streaming media. It intends to do that using a platform and interface that weaves together access to content from third-party partners, such as Lionsgate, MGM, Sony, Crackle, the BBC, AMC and A+E Networks, along with the user's own content and other media assets on a wide range of streaming players/devices and smart TVs platforms. Plex's platform can also stitch in free, over-the-air broadcast TV channels.

Plex, whose platform supports access to more than 20,000 TV shows and movies and north of 150 free live TV streaming channels, said the plan heading into 2022 is to expand its role as a content and streaming hub for a wider range of offerings, including access to more "major streaming services" along with premium titles that can be rented or purchased.

Plex, which booted up an ad-supported VoD offering in 2019 and a free live TV service in 2020, will begin to push hard in that direction with a global base of roughly 25 million registered users in 193 countries.

The company is expanding on that plan amid the ongoing decline of the traditional pay-TV market, along with the debut of a string of premium, direct-to-consumer streaming services from major media companies spanning Disney, WarnerMedia, NBCUniversal and ViacomCBS.

'Cable company of the future'

Although Plex faces stiff competition from deep-pocketed streaming companies, its vision is to broaden its role as a master aggregator as consumers continue to gravitate to OTT services and require help to navigate a sea of content choices.

"Content providers, creators and consumers are all paying the price for the explosion of so many streaming media services and the industry needs a trusted way for the experience to be as enjoyable as possible," Jason Chapnik, Intercap's chairman and CEO and new chairman of Plex, said in a statement. "Plex has always been at the forefront of solving new media challenges and we believe they are primed to solve this problem – they are the cable company of the future."

Plex is far from alone in pursuing this kind of aggregation play. Top streaming platforms, including Roku, Apple, Google and Amazon, are all pursuing it in some shape or form.

Pay-TV providers are also getting further ensconced in this game. Comcast, for example, has been focused on integrating streaming services into its X1 platform for pay-TV subs and has likewise been getting aggressive with content aggregation with Xfinity Flex, a streaming platform currently focused on Comcast's broadband-only customers. Comcast is also exploring ways to market and deploy Flex outside of its cable footprint and integrating its software and platform in smart TVs on a global basis.

Update: Plex's plan appears to be another step to help the company move deeper into the mainstream and further away from its origins as an offering that catered to a more tech-savvy crowd. "I think they are now going more mainstream and looking to simplify it and make it easier to use for everybody," Colin Dixon, founder and chief analyst at nScreenMedia, said.

And that, he points out, is being backed up by a blend of business models that span advertising and a subscription offering that builds in cloud DVR and other advanced capabilities.

He expects Plex to invest further in product development and ad-tech, and to beef up its visibility in regions such as Europe and North America.

Dixon also views Plex as one of a few remaining independent companies, noting that this puts the company in better position to make unbiased recommendations to its users.

With this latest batch of funds included, Plex has raised more than $60 million from a group of investors that includes Intercap, Kleiner Perkins, Tribune Media and Klass Capital.

Among other moves tied to the funding announcement, Intercap President James Merkur has also joined the Plex board.