In a deal that adds to the threats facing the legacy pay-TV bundle, CBS Sports and Paramount+ announced today they have locked in the exclusive US rights to Serie A, the Italian professional soccer league. Financial terms were not announced, but the deal paves the way for coverage of more than 400 soccer matches each season, including the Serie A Championship, through 2024.

Paramount+, the premium streaming service that launched March 4 and succeeded CBS All Access, is taking the lead with Serie A coverage, with 380 Serie A matches and at least 25 Coppa Italia matches. "Select matches" will be shown on CBS Sports linear TV platforms, including CBS Sports Network. CBS Sports coverage starts in August in tandem with the kickoff of the 2021-2022 Serie A season. 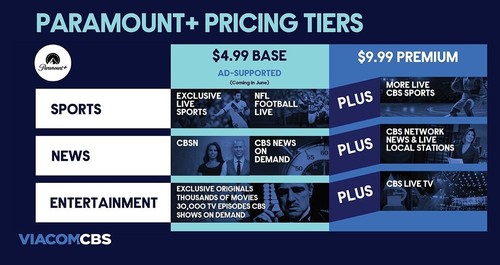 The deal for Serie A games will flesh out the live sports piece of Paramount+'s 'premium' service tier.
(Image source: ViacomCBS)

Though some of those matches will be televised on some of ViacomCBS's traditional TV channels, the agreement builds on the media giant's plans to flesh out Paramount+ with a blend of entertainment, news and live sports.

Paramount+ has a sizable lineup of other live sports coming to the streaming service this spring, including all UEFA Champions League and UEFA Europa League matches and the 2021 NCAA Division I Men's' Basketball Championship. Paramount+'s "premium" tier, which includes the bulk of the streaming service's live sports content, costs $9.99 per month. A $4.99 ad-supported base tier, which will include live NFL coverage but not Paramount+'s broader live sports slate, is set to launch sometime in June.

The new deal for Serie A matches is yet another example of how new, premium streaming services have become increasingly aggressive in locking in rights for live televised sports. Live sports, once viewed as the final strings holding together the traditional pay-TV package, continue to be snipped away.

Among other recent moves, Amazon Prime snapped up the exclusive national TV rights to the NFL's Thursday Night Football slate, an all-digital package that reportedly went for about $1 billion per year. ESPN+, NBCU's Peacock, Paramount+ and Fox-owned Tubi also came away with streaming rights for NFL games (mostly with simulcasts of traditional TV coverage) and related league programming via a recent wave of new long-term contracts with the National Football League.

Peacock's sports focus already extends well beyond the NFL. Amid the coming shutdown of NBCSN, coverage of National Hockey League and NASCAR coverage will transition to USA Network, but some NBCSN sports programs could be moved to Peacock, the NBCU-owned streaming service that launched nationally last July and now counts about 33 million signups. Peacock also picked exclusive streaming rights to the WWE Network starting March 18, and will have coverage of golf's US Open and US Women's Open, Premier League games and Olympics coverage. Peacock last August introduced a free channel, called NBC Sports on Peacock, that streams live sports talk shows such as The Dan Patrick Show and The Rich Eisen Show.

Live TV sports coverage is starting to shift to streaming services amid the ongoing decline of traditional pay-TV. Traditional US pay-TV providers  cable, satellite and telcos  combined to lose another 1.35 million video subs in Q4 2020, and about 6 million for all of 2020, according to MoffettNathanson estimates. The total US pay-TV universe dropped about 875,000 subs in Q4 when factoring in the 498,000 subscribers added by virtual multichannel video programing distributors (vMVPDs) during the period.