Following a battery of tests and trials, Netflix this week unleashed its mobile-focused casual gaming service with a handful of titles, including a pair focused on its Stranger Things franchise.

Netflix said it has begun to gradually roll out the games service on its app for Android mobile devices, appearing along a dedicated games row and games tab. Netflix, which ended Q3 2021 with 213.56 million subs worldwide, has yet to announce when the games will start showing up on its app for iOS, but tweeted that support for that platform is "on the way."

Tomorrow, Netflix Games will start rolling out on the Netflix mobile app. First on Android, with iOS on the way.

Its early days, but were excited to start bringing you exclusive games, with no ads, no additional fees and no in-app purchases. pic.twitter.com/ofNGF4b8At 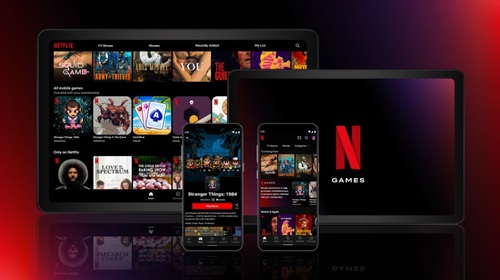 Gaming has been identified as a strategic priority for Netflix, but the company acknowledges it will take months, and possibly years, to understand how the new offering drives engagement and other aspects of its business.
(Image source: Netflix)

Netflix noted that some mobile games may require an Internet connection, but others will be available to download and play offline. Netflix games will be offered in multiple languages and will default to the language the customer sets in his or her profile. If the preferred language is not supported by the game, it will default to English.

Netflix's mobile gaming service is baked into the baseline service subscription and is free of advertisements and in-app purchases. Netflix allows all profiles on an account to play games, but does not make them available on kids profiles that require a PIN to access adult content.

Netflix is in the "early days of creating great gaming experience," Mike Verdu, VP of game development at Netflix, explained in this blog post.

The move into gaming obviously places Netflix into a new content category while also putting the company in position to boost engagement on mobile platforms.

The "strategic priority" with the new service is to help subs engage with the service on a mobile device, Greg Peters, Netflix's COO and chief product officer, said last month on the company's Q3 2021 earnings call. "We want to make sure that when they're  out and about, that they have the opportunity to get a greater Netflix experience with their mobile phone."

But he acknowledged that it will be "still many months and, frankly, years" before Netflix gets a true understanding of how the new offering will impact engagement and other aspects of the business.

Peters said the initial trials in markets such as Italy and Spain were to ensure that the underlying systems worked properly. "We're incredibly early in this process  We're building all the systems around it, [focused on ] the same things that's made our service very powerful for recommending movies and TV shows."

Reed Hastings, Netflix's co-CEO, said he sees original series and games that support them becoming increasingly intertwined. He cited Disney's efforts with shows and gaming as a prime model to follow, hopeful that Netflix will be in position to close that gap in the coming years.

By way of example, Hastings envisioned that a future season of a series such as Squid Game could launch with "an incredible array of interactive gaming options, and it's all built into the service  A company like Disney is still ahead of us in some of those dimensions of putting that whole experience together."