The APAC region, which added 2.18 million streaming subs in the period, was Netflix's largest contributor for a second consecutive quarter. Adds in the EMEA (Europe, Middle East and Africa) region improved to 1.8 million as growth in the US and Canada (+70,000) and Latin America (+330,000) slowed. 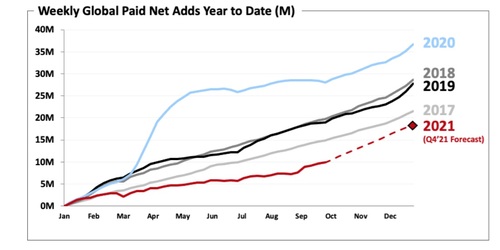 Netflix's total sub growth in 2021 will come in below recent years due mainly to surges in 2020 fueled by the early stages of the pandemic.
(Source: Netflix)

Netflix attributed its overall subscriber growth in the period to a stronger slate of content in Q3 that followed lighter-than-normal output in the first half of 2021 due to pandemic-related production delays. With another strong content slate set for the fourth quarter, Netflix noted in its investor letter (PDF) that it expects to tack on another 8.5 million streaming subs in Q4 2021 (similar to subscriber additions in Q4 2020), and end the year with a global base of 222.06 million.

Netflix reiterated that Squid Game, a series originating in South Korea, has become the streaming service's biggest TV show ever. Some 142 million subscriber households watched it in its first four weeks of release, the company said.

But that viewing metric, based on accounts that watched at least two minutes of an individual title, will soon be going away. Netflix announced that, starting later this year, it will shift to reporting on hours viewed for its titles rather than the number of accounts that choose to watch them. 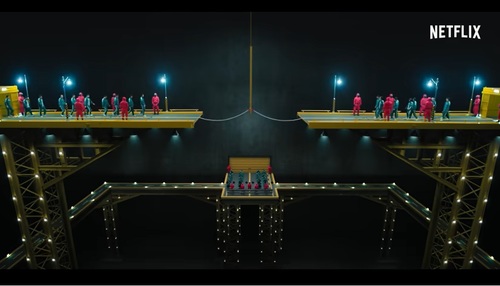 Netflix said Squid Game, the streaming service's biggest TV show ever, drew viewership from 142 million subscriber households in its first four weeks of release, but did not yet say how that number will translate when Netflix shifts to a metric based on viewing hours.
(Image source: Netflix, screenshot from Squid Games trailer)

"[W]e think engagement as measured by hours viewed is a slightly better indicator of the overall success of our titles and member satisfaction," Netflix explained, noting it intends to release title metrics on a more regular basis outside of its quarterly earnings. "It also matches how outside services measure TV viewing and gives proper credit to rewatching."

By way of example, some 82 million accounts watched Bridgerton: Season 1 in its first 28 days on Netflix. Under the future reporting metric, that translates to 625 million hours viewed, according to Netflix.

Netflix also offered a small update on a gaming test underway in select countries. Although this initiative is in its "very early days," Netflix noted that games offered on the service will be included in the base subscription and won't be saddled with ads or in-app purchases.