Two suppliers  Minerva and a startup called Shift 2 Stream  are also among the companies attempting to capitalize on potential new business opportunities after a MobiTV bankruptcy filing that has some US service operators rethinking their next-gen pay-TV service plans.

Both Minerva and Shift 2 Stream claim to bring forth platforms that can manage new app-based pay-TV services on behalf of their operator partners. They likewise claim that, unlike MobiTV's past efforts, they have developed more profitable business models that can sustain those businesses for the long term by allowing operators to keep drawing value out of their legacy systems even as they migrate to new streaming platforms. 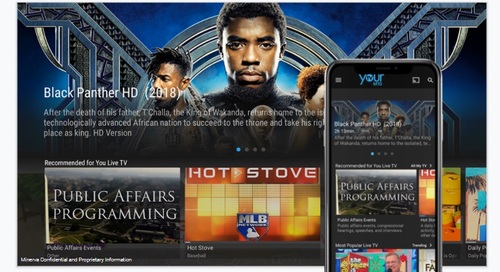 Minerva says its YourTV Now platform can be customized to the operator's branding and works on multiple types of streaming devices.
(Image source: Minerva)

MobiTV filed for voluntary Chapter 11 restructuring earlier this month, with a unit of T-Mobile agreeing to toss in $15.5 million in debtor-in-financing to keep MobiTV operating through the process. Although MobiTV intends to come out of the process fully intact, the uncertainty swirling about the company, industry sources say, has caused several of MobiTV's existing customers, as well as those previously considering partnerships with the vendor, to explore alternatives.

Minerva, an IPTV tech pioneer, is targeting this new opportunity with a relatively new platform called YourTV Now. Meanwhile, Shift 2 Stream is getting into the mix with a system featuring integrated components and capabilities from a mix of still unnamed vendor and supplier partners. As Light Reading reported earlier, Adara Technologies, a company focused on smaller, independent cable operators and telcos, is also pitching an alternative option with an app- and IP-based video platform called "myCatapulTVe."

"Our phone has been ringing off the hook" since the MobiTV filing, said Randy Osborne, VP of worldwide sales at Minerva. "They all want a backup plan."

Both Minerva and Shift 2 Stream are quick to credit MobiTV with the baseline idea of creating a platform that streamlines and manages all of the primary components that an operator with limited internal resources would need to develop and launch an advanced, app-based pay-TV service. Their approaches also utilize multi-tenant headends and other shared elements designed to reduce complexity and cut down the overall costs of a new app-based pay-TV offering.

YourTV Now, a platform that Minerva launched about two years ago, "was clearly  in response to the great idea that MobiTV had," said Matt Cuson, VP of marketing and product at Minerva. "You've got to give them credit for coming up with a good idea  We've taken that basic idea and gone global with it."

Shift 2 Stream has developed a "comparable and competitive solution for what MobiTV has," said Steve Calzone, CEO of the Alpharetta, Georgia-based startup. Calzone is a former video executive at Cox Communications who was heavily involved with the operator's guides, app development and user experience technologies. He was also a key member of the team that managed Cox's transition to a new "Contour" platform that's underpinned by an X1 syndication deal with Comcast.

Similarities to MobiTV's general approach aside, Minerva and Shift 2 Stream also believe their vector into the app-based streaming market for service providers is financially viable. They say that's partly because they work under a business model that accounts for the operator's legacy platform and have teamed with partners that offset some of the steep headend and other hardware overhead costs that MobiTV has been saddled with.

In Minerva's case, it has teamed with Com Net Inc. (CNI) on a multi-tenant headend to help handle the sourcing of the TV feeds, preparation of the video streams, and the transport of those streams for the new app-focused YourTV Now offering.

Under that model, CNI effectively eats much of the hardware costs that burdened MobiTV. CNI, an Ohio-based company founded in 1993 that's now owned by 21 telcos and an electrical cooperative, originally provided a shared switch for telephone services. It later built a shared headend for IPTV services and followed that with a platform that can transport video for newer, app-based pay-TV services.

Rob Shema, CEO of CNI, notes that his company has the critical transport agreements with programmers to deliver the IP signal for an offering such as Minerva's YourTV Now. Unlike a traditional IPTV service equipped with transport rights that require signals to stay on the operator's network, new streaming services require new, separate transport agreements that allow for programming signals to be transported from an off-net headend to the operator's access network.

The same transport system can also handle local TV signals. According to Shema, the operator's on-premises gear prepares those feeds and sends them to the CNI headend, which then repackages the signals for the service provider's app and ships them back  all with just a few seconds of latency.

Shema, a former EVP at ACA Connects, a group focused on the regulatory interests of independent cable operators and telcos, notes that his company is not Minerva-centric, as it could provide similar multi-tenant headend and transport services to a company such as TiVo or Adara. To amplify this agnostic approach, Shema points out that a service provider in Ohio gets MobiTV feeds from CNI rather than from MobiTV's multi-tenant headend in Sacramento.

Update: To clarify CNI's role in the instance involving MobiTV, Shema points out that his company only handles transport for MobiTV services over its own network, and that MobiTV does not use CNI's headend or any other CNI equipment. Further, CNI does not have a direct connection or interaction with MobiTV, he adds.

He says CNI and Minerva teamed up about three years ago, and estimates that CNI is helping two to three customers a month get off the ground with Minerva's app-based service.

Minerva isn't spelling out which existing IPTV customers or those new to Minerva have signed deals for the YourTV Now platform, but execs estimate that a couple of dozen customers have signed up and are at various stages of deployment. Most of that group have started with apps for mobile devices as work continues on apps for TV streaming devices (Android TV, Amazon Fire TV, Apple TV and Roku).

Hybrid approach covers the legacy and the new

While the longer term focus of YourTV Now is on new streaming devices, Minerva's claims its hybrid approach also ties in shared infrastructure that can support an operator's legacy Linux-based IPTV set-tops and or even QAM-based cable boxes. In the case of a legacy Linux IPTV box, Minerva's approach is to reflash the box with a software update that enables the device to start communicating with the YourTV Now system in the cloud.

Cuson believes this hybrid path represented a hole in MobiTV's business case, which he believes was too centered on a cap-and-grow approach that discounted the inertia it would encounter from the operator's legacy video service.

While getting customers on the new platform is the priority, putting too much attention on it can ignore a legacy video subscriber base that's still driving revenue from the pay-TV service and box rental fees and using existing headend resources.

"Mobi had a good idea, but missed key elements that they needed to scale quickly to get to profitability," Cuson argued, noting that it takes time to convert customers to the new system. "They've been kind of dribbling subscribers in over time... that's tough when you don't have any other source of revenue."

A business strategy that's overly fixated on a pure cap-and-grow approach "restricts how quickly you can grow subscribers," Cuson adds. "Customers can move to [our] new model because we support those legacy devices and legacy use-cases. But the idea is to migrate all of them and shut down that old system."

Switching systems not an overnight affair

Should MobiTV encounter bumps during the bankruptcy process or if the situation somehow requires operators to consider moving to a new platform, operators should not expect such a pivot to occur overnight.

Minerva execs estimate that a process to move to YourTV Now could take about three months, depending on the operator. Picking the connection is one of the long poles in the tent, but it also takes time to brand the app/client, set up the caches and submit and get approvals for the apps themselves.

Taking over the pay-TV biz

But the general concept effectively is to get the operator out of the TV business and have Shift 2 Stream operate and manage the service instead.

"We feel like they don't need to operate their TV service anymore," Calzone said. "We're focused on  how to get them out of their TV business for them, while making them money."

While Shift 2 Stream has the ability to set up and effectively take over the management of the operator's video business, Calzone stresses that the company also has the flexibility to stand up the new offering and then pass the baton to the service provider. Shift 2 Stream's early work with still unnamed service providers cover both scenarios.

As another key piece, Shift 2 Stream also has relationships with major programmers and can manage the transport agreements on behalf of its operator partners, Calzone said.

Vubiquity, a company that works with companies such as Minerva, Enghouse, Broadpeak and Innovative Systems, says its linear streaming service can also play a role with operators that are seeking alternatives.

Vubiquity, now part of Amdocs Media, has a national terrestrial network with an NOC that provides linear and VoD content distribution, including support for new app-based streaming services. The company notes it has the requisite transport rights for cable operators and telcos that, in turn, can connect with organizations such as the National Cable Television Cooperative (NCTC) or the National Rural Telecommunications Cooperative (NRTC) to obtain the distribution rights. To support local channels, Vubiquity says it has options for on-site transcoding at the cable headend or transcoding at caching facilities run by Vubiquity or one of its partners.

Adjusting to the app era

Speaking of rights, transport rights are an evolving piece of the puzzle that operators must deal with in the app age. Taking full advantage of the capabilities of the middleware, including how programmers are represented and marketed within the user interfaces, has become increasingly important when transport rights are being negotiated or renegotiated.

Osborne notes that Minerva, for example, has been required to complete additional custom work for programmers like HBO as well as custom Nielsen ratings work to secure the rights to the Turner networks.

"The contracts for transport [rights] now are also tied to the UI/UX," he said.

Content owners, Cuson adds, have put forth those additional requirements and conditions for app-based, pay-TV platforms after having an opportunity to implement these new tools for their own direct-to-consumer apps.

"It's not just about bits-in/bits-out. It's about creating an engaging user experience and protecting your brand inside the app," Cuson says. "You're competing for eyeballs very differently now and the content owners need support of the middleware for them to realize their business models  The rules of engagement are changing, and I think one of the challenges a lot of the operators face is they're not used to having to do that."