Hulu's future could be set by Disney-Comcast carriage talks  analyst

The final fate of Hulu, the Disney-controlled SVoD and pay-TV service, could be determined by a new, all-encompassing carriage deal between Disney and Comcast, resulting in Comcast scoring a multi-billion-dollar windfall. Or, the unwinding of Comcast's stake in Hulu could be pushed off until 2024, and still result in Comcast getting a mountain of money.

That first possibility is "almost certainly wishful thinking," but the selling off of Comcast's stake is an inevitability that will end with Comcast cashing a monster check, Craig Moffett, analyst with MoffettNathanson, explained in a report that digs into Hulu's total value and how much Comcast might wring from it. 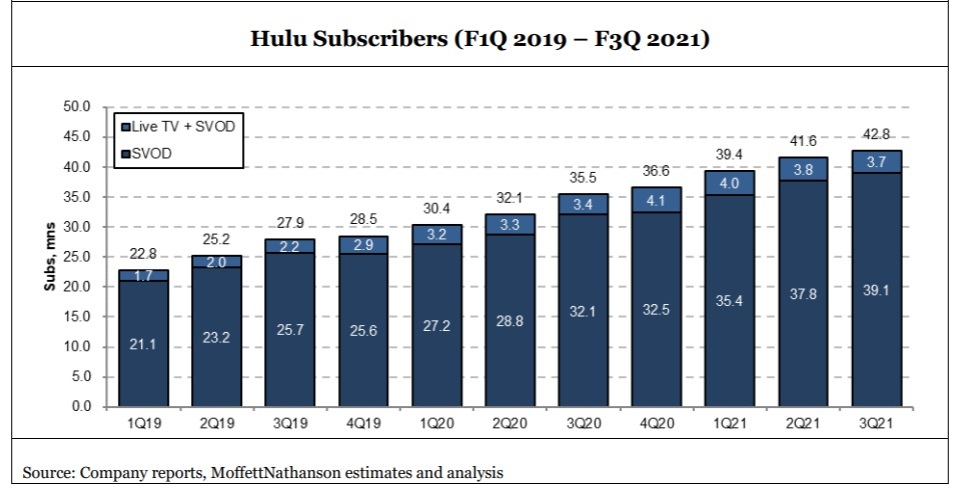 Moffett is running that analysis now because the current ten-year carriage deal between Comcast and Disney is set to expire. Although there's been no word of an impasse that would result in a blackout of Disney-owned networks such as ABC and ESPN, it does open the door to further negotiations centered on Hulu. Disney controls Hulu, but Comcast/NBCU still holds a 33% stake. A path has been set for Comcast to unwind its Hulu stake in 2024.

Moffett wonders if these renewal negotiations could provide an opportunity to unwind the Hulu relationship much sooner. "To be clear, there is no indication that Disney and Comcast will use this programming renewal as an opportunity to settle the Hulu stake preemptively," the analyst explains. "Our analysis is therefore occasioned by what is almost certainly wishful thinking."

There's a lot at stake. Moffett notes that Comcast has a floor valuation of $27.5 billion for all of Hulu, putting its stake at roughly $9.1 billion.

Moffett believes Comcast would have good reason to pursue an early exit, noting it would "validate the strategy" to build out the NBCU-owned Peacock service. On a more cynical note, Comcast might consider doing a deal at current values amid signs that the growth of the SVoD market is slowing down, or be worried that a future clawing back of NBCU content from Hulu could "put a dent in Hulu's appeal." Comcast might also be worried that "SVoD valuations are extended, and that now might be a good time to take the profits," Moffett added.

But none of that matters unless Disney allows for Comcast to take an early exit, and it's not clear why The Moue would even consider it.

"Other than Comcast's willingness to take a price well below Disney's estimate of fair value, it's hard to see why Disney would not choose to wait," Moffett explained. "In the scenario that the value of Hulu rises dramatically between now and January 2024, Disney would, of course, still benefit more than Comcast would."

Still, Moffett wonders if the network affiliation agreement being hammered out now could prove the wildcard and drive forward the thought of an early exit, given Comcast's position as the largest video distributor in the industry.

But, when it's all put together, Moffett believes it's unlikely that these negotiations will provide cause for an early exit for Comcast. "But that doesn't change the fact that there's quite a lot of value at Comcast that will, sooner or later, monetize."

And Moffett sees more growth ahead for Hulu. He forecasts the streaming service will add 1.7 million subs in the final fiscal quarter of 2021, and 20.5 million more through the end of fiscal year 2024, ultimately reaching 65 million subs (58.8 million SVoD customers and 6.2 million Live TV + SVoD subs).