Hulu is about to raise the price of its live TV service by $5 per month, but try to soften the blow by bundling in two premium streaming services  Disney+ and ESPN+. 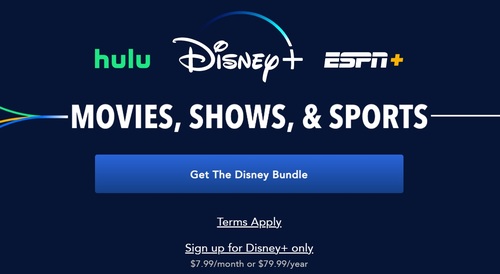 Disney is obviously looking for a way to jolt streaming subscriber growth across the board as it ties services together across Hulu's pay-TV base of about 4 million.

Disney+ added a disappointing 2.1 million subs in the company's fiscal Q4 due in part to production slowdowns that have caused the flow of new originals to slow. Meanwhile, Hulu's live TV service added 300,000 subs in the period, while ESPN+ tacked on 2.2 million.

The bundling strategy does add value as Hulu raises the price of its live TV offering, but, strategically, it will enable Disney to expand the reach of its full complement of direct-to-consumer (DTC) services. On the other hand, bundling them all together could cut into the average revenue per unit (ARPU) for Disney+ and ESPN+, which sell monthly for $7.99 and $6.99, respectively, on a standalone basis.

The move with Hulu + Live TV could end up being a mixed bag for Disney. While some customers will be happy to have Disney+ and ESPN+ included, the bundle does make the service a bit more complicated. And it's possible that some Hulu + Live TV subs won't like having Disney+ and ESPN+ foisted upon them, perhaps causing some to explore other options.

But Richard Greenfield, analyst with LightShed Partners, believes it's a smart move overall, noting that it will ultimately help to keep churn in check after the NFL season and provide Hulu with a differentiator in a crowded virtual multichannel video programming distributor (vMVPD) market.

1) Post-NFL season subs churn off video bundle - this helps keep them year round
2) Differentiates Hulu's vMVPD that has flatlined over the past year (not good for $FUBO)
3) Immediate boost to @disneyplus and #ESPNplus subs (albeit somewhat artificial) https://t.co/BXDtsPVOwm