The exit from beta is timed to coincide with the South American Football Confederation (CONMEBOL) qualifying matches for the Qatar World Cup 2022 soccer tournament. FuboTV has exclusive streaming rights to CONMEBOL through March 2022. 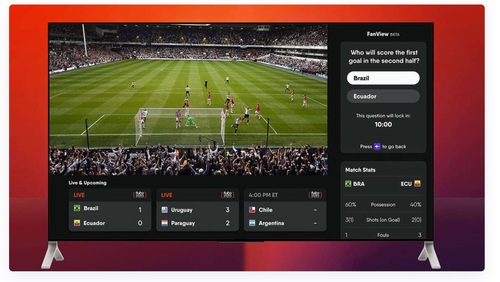 The gaming enhancement enables FuboTV viewers to tap into a reduced-size video player to stream live CONMEBOL matches, view match stats with FanView, and play a free, prediction-style game all on the same screen. The free games and FanView components can be toggled on or off during the matches, FuboTV noted.

"We believe this will mark the first time any company has integrated live streaming television, free games and live stats within the same platform, on the big screen," David Gandler, FuboTV's CEO and co-founder, said in a statement.

Support for the new features are not yet uniform across FuboTV's apps for various mobile, web and connected TV platforms. Its predictive, free-to-play games are initially supported on apps for Android and iOS smartphones and tablets, Android TV, Amazon Fire TV devices, Roku TVs and players, and web browsers. The FanView piece is currently supported on Android TV, Fire TV, LG and Samsung smart TVs, Roku devices, Xbox One consoles and web browsers. FuboTV said it expects to roll out both features on additional devices, but didn't specify timeframes.

FuboTV tested both enhancements during the CONMEBOL match window in June, finding that they boosted viewer engagement. The company said viewers who tapped into the FanView and free gaming elements watched more minutes (an increase of up to 37% in minutes, depending on the platform) compared to FuboTV subs who did not engage with those interactive features.

FuboTV noted it will add two new features for the September 2 launch  viewers will be able to see where they place on the leaderboard for each match, and can subscribe to be notified when new updates are released.

For September's CONMEBOL matches, subs who take advantage of the free gaming piece will earn points for every question answered correctly and be in the mix to earn the most points and win a $1,000 prize.

FuboTV is also continuing work on an online sportsbook that will allow betting where it has obtained regulatory approvals. The company expects that service, called Fubo Sportsbook, to launch in the fourth quarter of 2021. Here's a mock-up of what to expect:

FuboTV is ramping up its interactive and gaming capabilities as it seeks ways to grow its subscription and advertising businesses amid ongoing competition with a group of vMVPDs that include Sling TV, Hulu, YouTube TV, Philo, Vidgo and the recently rebranded DirecTV Stream.