Virtual multichannel video programming distributors (vMVPDs) have attracted millions of cord-cutters but, as a whole, have not been able to make up for the consumers who are fleeing traditional cable, telco and satellite TV providers.

Meanwhile, gaining and retaining subscribers remains a monthly battle in the no-contract world of the vMVPD. And as Fubo TV has shown, squeezing profits out of a vMVPD service that doesn't directly benefit from the high margins of home broadband service represents yet another big challenge. Meanwhile, many vMVPDs have fallen prey to exploding channel lineups and rising prices, unable to avoid many of the same issues that have plagued the traditional pay-TV market. Boiled down, the OTT-TV business model is tough on all fronts. 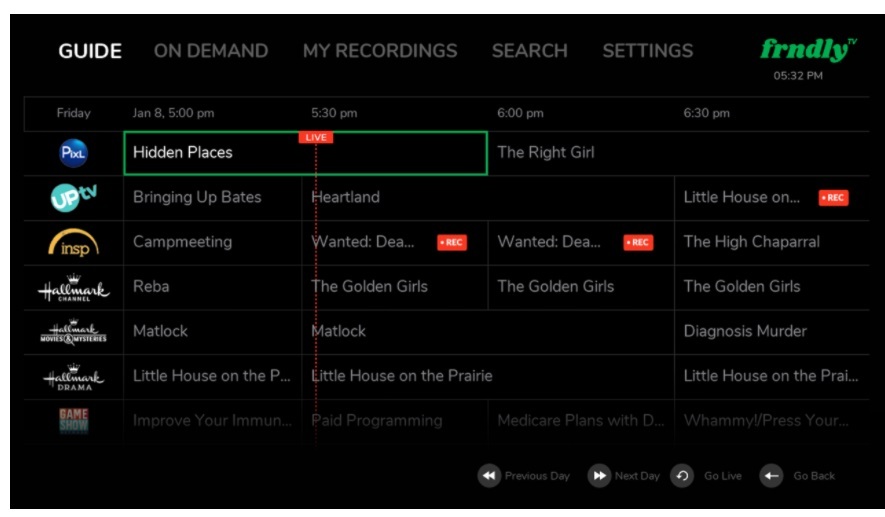 However, one vMVPD service, Frndly TV, has been able to buck the trend and find success with respect to both customer growth and profitability with an entertainment/family-focused skinny-bundle that features more than 35 channels, including A&E, History, Lifetime, the Hallmark Channel and The Weather Channel.

Amid those early results, Frndly TV, a Denver-based startup founded by several former Dish Network execs, expects to stick to its knitting  focusing on what it views as under-distributed, family-friendly (in the OTT-TV world, at least) channels at an affordable monthly nut. 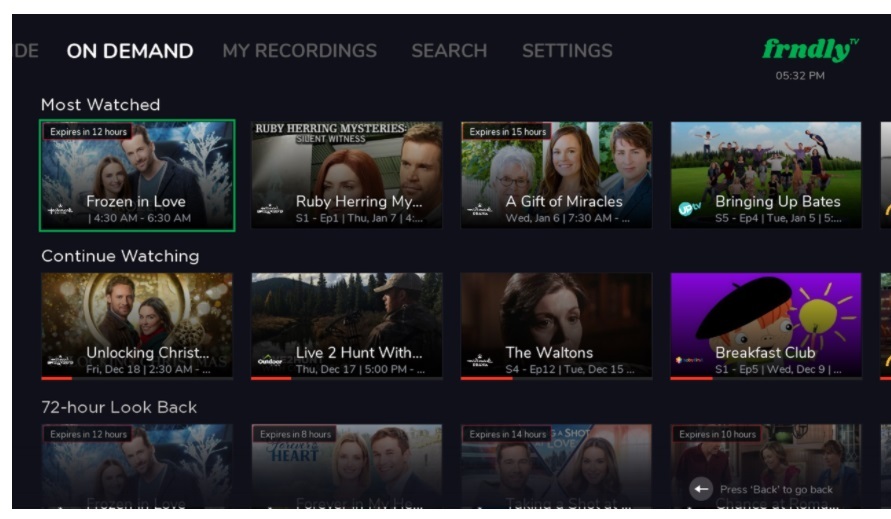 In addition to a lineup of 30-plus live TV channels, Frndly TV also supports a cloud DVR and a 72-hour 'Look Back' service.

"The concept around the business hasn't changed," Frndly TV COO and co-founder Andy Karofsky said. By comparison, the bulk of the vMVPD market, he adds, has largely pivoted away from an initial focus on skinny bundles as they've fattened up on programming and, as a result, have seen costs (and their prices) rise.

"The number one reason people cut the cord is price, so we stayed really focused on being able to deliver a virtual MVPD that is first and foremost a good product, but a very affordable product," said Karofsky, an exec late of Dish Network, Tribune Media and the Hallmark Channel.

But Frndly TV, which recently notched a key deal with A&E Networks, isn't completely immune to the pricing dynamics of pay-TV  it recently raised its prices by $1 per month.

While that represented Frndly TV's first ever price increase, Karofsky notes that the service has added about 18 channels since its launch more than two years ago. "We feel like we're still over-delivering on the original promise that we put out there," he said.

Frndly TV intends to expand its content slate with channels that don't wreck its business model. While that will include a focus on new channels for its baseline package, the service will also further explore add-ons  its first was Hallmark Movies Now, which goes for an extra $5.99 per month.

"It's an area of interest to us," Karofsky said. "There's a balance between how much of that you can have in a pay package. But there's some really good FAST channel products out there and some that would potentially fit."

Focused on the CX

Alongside price, Frndly TV is also trying to differentiate with a customer experience (CX) that was built from scratch, and includes responses on social media channels, chats, email and other forms of direct interaction. About half of Frndly TV's base of 35 employees are fully dedicated to enhancing all aspects of the service's customer experience, and all are based in the Denver area. Those CX specialists respond in real time, seven days a week (from 5 a.m. to 8 p.m. ET), according to the company.

Joey Monjure, Frndly TV's VP of customer experience and product, said that approach has helped the company to engage with customers who are new to cord-cutting and might require guidance with broadband speed requirements, setting up streaming devices and loading up and activating the Frndly TV app. That CX focus also ties in an uncomplicated guide featuring live programming and a "Look Back" feature that automatically captures shows that had aired up to 72 hours prior.

Frndly TV's primary demographic – adults and homeowners 25 to 54, – tend to skew to a wider and somewhat older audience than the core 18-34 age group of cord-cutters that generally gravitate to vMVPDs.

The service "expands to a very wide age range and a wide demographic on who is cutting the cord and who is using these connected TVs," Karofsky said.

Frndly TV has generally been marketing the service through digital channels and even on some of the streaming platforms themselves. But the company says it is also open to other types of distribution, including potential partnerships with cable operators and telcos that have assumed a "broadband-first" posture that de-emphasizes their own pay-TV business and instead promotes partnerships with outside vMVPDs.

Frndly TV is having those kinds of discussions, but nothing's yet concrete, Karofsky said.