Elements of customization and personalization, including individual user profiles and content recommendations, have seeped into many top streaming apps. But the work Firstlight Media has undertaken with Sportsnet, the Rogers Communications-owned major sports network, intends to take things to a whole new level.

Rather than being confined to the hard-coded, monolithic nature of today's streaming apps for live and on-demand content, Firstlight Media, along with partner Deltatre, is using its cloud-native platform to underpin a revamped version of Sportsnet's SN Now app that will generate different user experiences for viewers based on their usage, what they like (or don't like) and other data. The app will effectively look different from one user to another based on their activity and preferences. 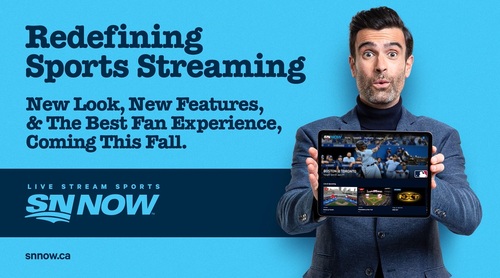 Canada's Sportsnet has been has been teasing the new SN Now app ahead of an anticipated fall 2021 launch.
(Image source: Sportsnet)

Instead of sticking with a traditional one-size-fits-all streaming experience, the revamped form of SN Now, set to launch sometime this fall, will phase in a wide array of enhancements, including improved stream quality and reliability, personalized content, customizable stats overlays and, in some cases, access to multiple camera angles. The idea is to provide a platform that can constantly evolve and iterate.

André Christensen, CEO and co-founder of Firstlight Media, said the use of its cloud-native, Kubernetes-based technology will enable Sportsnet to tap into a microservices architecture that can constantly change, putting the sports network in position to experiment and roll out a mix of new personalized and differentiated experiences to its viewers.

"You can't really create different experiences without actually putting up new stacks of technology to do that," Christensen said, noting that previous generations of streaming platforms could handle simple elements such as recommendations, but were still limited by the monolithic boundaries of their architectures. "From an architectural point of view, you have a lot of flexibility in how you want these microservices to work together  This platform is capable of serving different cohorts with very different experiences."

For the SN Now deployment, Firstlight is providing a cloud-native backoffice system that will acquire, process and manage the content. Deltatre is building the apps, including the user interface and user experience for the revamped offering. Firstlight is already hooked into multiple public clouds, but will power this deployment with Sportsnet on Microsoft Azure.

That relaunch will arrive about five years after the original launch of SN Now, which is currently offered on several streaming platforms, including Xbox consoles, iOS and Android mobile devices, Apple TV boxes, PlayStation 4/5 consoles, Amazon Fire TV players and smart TVs, Android TV boxes, as well as Ignite TV, an IP-based pay-TV platform from Rogers that ties into an X1 syndication deal with Comcast.

The Sportsnet agreement is the first one centered on live sports that taps into Firstlight's new cloud-native platform. It's also the first sports-focused streaming deal for Firstlight since being formed last April from the acquisition of AT&T's QuickPlay assets. Among other recent wins, Firstlight Media's technology is helping to power Struum, a new streaming service that aggregates content from an array of OTT services.

Christensen, who was COO of QuickPlay before later serving in product development at AT&T, admits that he thought Firstlight Media would initially gain traction as a provider of point solutions for streaming services looking to fill certain gaps in their arsenals. Instead, he's seeing streaming players that are seeking more complete "transformations" of their streaming platforms.

"In reality, people are looking for end-to-end replacement," he said.

In addition to opportunities centered on sports networks or franchises and direct-to-consumer entertainment streaming services, Christensen said Firstlight is also seeing some traction with pay-TV providers that are looking to pivot away from their legacy platforms and looking to team their core video services with other revenue-driving services such as home security and home Wi-Fi management.