While much attention continues to be dedicated to the growth of Netflix, Disney+ and other popular subscription VoD services, the market for free ad-supported streaming TV (FAST) services is also on the rise amid the precipitous decline of traditional pay-TV.

Fueled in part by an influx of new, premium content, building audiences and fresh advertising dollars, the FAST market in the US is poised to reach 216 million monthly active users in 2023, according to a new study from nScreenMedia.

Tied in, advertising revenues earned by virtual linear (vLinear) channels  streaming channels that look and feel like a traditional live TV channel but are streamed in via the Internet  are in position to reach $4.1 billion in 2023, nearly double what's expected to come in the door in 2021, nScreenMedia forecasts. 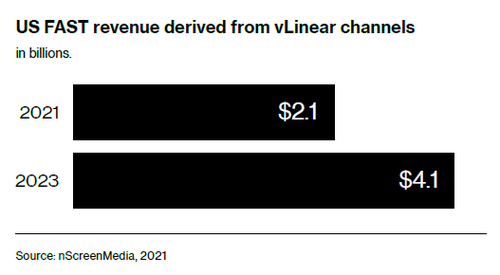 With so much at stake, it's no wonder that distributors, programmers and device makers are all fully engaged in the FAST market in some form or fashion.

Among some recent examples, Comcast acquired Xumo in 2020, ViacomCBS is making hay with Pluto TV (acquired by Viacom in 2019 for $340 million), and Fox Corp. continues to broaden the reach and scope of Tubi, the FAST service it snapped up in 2020.

Notably, Tubi is starting to loosen some of the sports glue that has held pay-TV packages together by rolling out "Sports on Tubi," an offering developed in partnership with corporate cousin Fox Sports that will initially feature ten live-streaming sports channels. Though Sports on Tubi chips away at the televised sports model, it's not yet a true replacement of sports on traditional TV services, but more of a complement at this point. As Variety points out, Sports on Tubi will present much of its content, which will include highlights and daily studio content, in a linear, live TV fashion, but won't offer much in the way of live games and matches.

But, together, those offer a clear indication that free, ad-based TV-style viewing still has a place with consumers despite the ongoing struggles of the pay-TV market.

"There was a time when many forecast the death of linear TV viewing," Colin Dixon, nScreenMedia's founder and chief analyst, said in a statement. "However, it is now clear that the format continues to deliver value to viewers. The FAST market has just begun a long period of rapid expansion."

nScreenMedia notes that Pluto TV, now part of ViacomCBS, is the US market leader in FAST, but expects its share to diminish as smart TV makers and services such as NBCUniversal's Peacock and even ViacomCBS's own Paramount+ lean into the opportunity.

Device makers, including TV manufacturers such as LG Electronics, TCL, Vizio and Samsung, have also become a force in the FAST game as part of a strategy focused on driving product sales and using ad revenues to bump up thinning product margins.

The study highlights Roku as a prime example of this trend, noting that its Platforms business, which is largely driven by advertising and FAST services such as The Roku Channel, has grown dramatically in recent years. In Q1 2017, Roku's Platforms business represented just 36.4% of revenues compared to 63.65% of its hardware/streaming players business. In Q1 2021, the business had more than reversed itself, with the Platform business representing 81.2% of revenues compared to just 18.18% for Roku's streaming player business.

There's "little wonder that Roku has pivoted its business from hardware to ad-sales," Dixon noted in the Verizon Media-sponsored report. "Many smart TV manufacturers have watched Roku reinvent its business and are working to do the same."

Like what we have to say? Click here to sign up to our daily newsletter
COMMENTS
Newest First | Oldest First | Threaded View
Add Comment
Be the first to post a comment regarding this story.
EDUCATIONAL RESOURCES
sponsor supplied content
Heavy Reading Report - The Journey to Cloud Native
IDC Whitepaper: Key Considerations When Operationalizing Artificial Intelligence Strategy
The State of Fixed-Mobile Convergence
Blog: How Telefónica is evolving its OSS to support network automation
Blog: The benefits of Edge Computing
Scalable, cloud-native 5G open RAN is now a reality
Using AIOps solutions in the telecoms industry: a market assessment
Re-Architecting the Broadband Network Gateway (BNG) in a Network Functions Virtualization (NFV) and Cloud Native World
Educational Resources Archive
More Blogs from The Bauminator
Will the metaverse lead cable's '10G Challenge'?