Taking advantage of its new, common tech stack, Comcast has introduced a global streaming device called the XiOne. The initial plan is to make the product available to Comcast's Xfinity and Sky operations in the US and Europe, as well as to Comcast's X1 syndication partners. 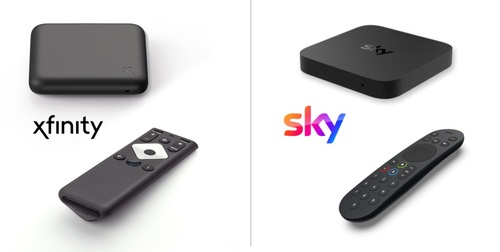 Comcast has developed multiple hardware designs for the XiOne, but, to suit the product's global ambitions, it is powered by a common tech stack.
(Image source: Comcast)

Comcast said the XiOne will initially be available to Sky Q customers in Italy and Germany, and will likewise be rolled out for Xfinity Flex, Comcast's streaming/smart home product for broadband-only cable customers.

Xfinity Flex has been using the 4K-capable Xi6 box (also used for Comcast's flagship X1 pay-TV service) since its launch in 2019. The new streaming box would appear to open up another option for Xfinity Flex, but Comcast said it does not plan to use the XiOne as an outright replacement for the Xi6.

Comcast said the XiOne will also be available to its range of syndication partners. Today, that group includes Cox Communications and three Canadian operators  Rogers Communications, Shaw Communications and Videotron. Comcast did not announce if it intends to sell the XiOne at retail or market it outside the company's traditional service footprint.

The XiOne arrives on the scene after Comcast dropped several hints that work on a common tech stack with global aspirations was underway at Sky, the UK-based media and pay-TV company Comcast acquired in 2018.

"When Sky joined the Comcast family, we brought together our engineers to share insights, roadmaps, talent, and technology to support our global customers," Charlie Herrin, president of technology for Comcast, said in a statement.

"The launch of our new XiOne device is a direct result of these efforts and underscores how our collaborative development approach can bring new and innovative streaming products to markets faster and more efficiently."

A new line of XClass-branded smart TVs that Comcast is reportedly preparing to launch would appear to be another obvious candidate for the company's common tech stack.

In that role, Stirling, formerly SVP of digital home, devices and artificial intelligence at Comcast, was tasked with driving alignment between the Comcast and Sky product roadmaps and overseeing customer premises equipment (CPE) and software for both Comcast and Sky.

"I think you'll see some new product innovation from us in the months ahead," Brian Roberts, Comcast's chairman and CEO, said Wednesday at the Goldman Sachs Communacopia Conference. "We're going to take it to the next level  Having one common tech stack is critical."