Comcast Technology Solutions (CTS) says it's in position to help small and midsized US operators start their migration to IP video with the launch of a new Managed Terrestrial Distribution service that complements a legacy, satellite-based platform that's been in use since the mid-1990s.

The new terrestrial product will initially complement CTS's legacy satellite distribution system, once known industry-wide as Headend in the Sky (HITS). That satellite-based system, which supports older QAM-based video distribution systems and set-top boxes, will remain in place for the foreseeable future. But the new platform will enable CTS's hundreds of cable operator partners to start their migration to IP-based video services.

"Ultimately, it's a way to give small to mid-size cable operators a leg up with respect to getting IP signals and IP video services," Allison Olien, VP and GM of the Communications and Technology Provider Suite at CTS, said. It also maps in with the broadband-focused investments being made by smaller cable operators, she added. 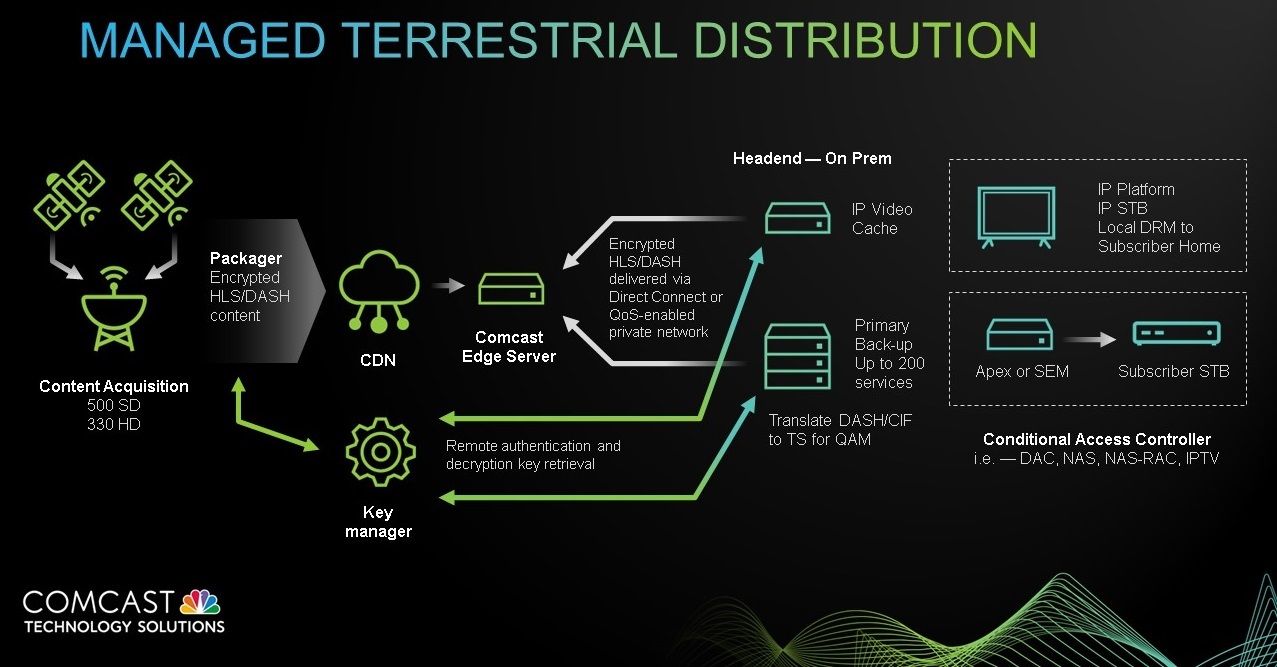 CTS's new terrestrial offering effectively drafts off what Comcast has been doing with its content delivery network (CDN) and the IP-based services it's been providing to its own pay-TV customers.

In addition to providing access to IP video signals that have previously been out of reach to CTS affiliates, the new managed terrestrial distribution system aims to significantly cut down infrastructure expenses and streamline headends when compared to the requirements of the existing satellite-based system.

Rather than requiring what could end up being dozens of satellite receivers, the new terrestrial system requires partner operators to install merely a couple of HP servers along with new switches and VPN devices, Olien explained. On CTS's end, the company sources the video feeds, converts them to IP, and then funnels the IP signals to partner operators via secure Internet connections.

CTS affiliates that opt for the new terrestrial platform won't need to flip their full video service to IP right away, as they have the option to feed the IP signals through to customers that use IP-based customer premises equipment (CPE), or convert those signals back to QAM for customers who are still using older set-tops.

The IPTV migration market for tier 2/3 operators appears to be heating up. Of recent note, TiVo is getting more active following its acquisition of the MobiTV assets. Meanwhile, Tennessee-based Jackson Energy Authority has teamed with Harmonic and other suppliers on a new, hosted headend management streaming platform that enables partners to offer new IPTV services alongside legacy QAM-based video services.

First on board: MTC Cable

The first announced cable operator to tap into CTS's new terrestrial platform is MTC Cable, an operator based in Margaretville, New York. Olien noted the terrestrial system will help MTC Cable overcome some challenges with its "look angle" for the satellite dishes.

Olien said additional customers are in line to be launched, and a couple of other cable systems are currently in the final testing phases. She said CTS has also been focusing some of its early terrestrial system activity on smaller affiliates that no longer require satellite infrastructure amid a C-band transition that is reallocating a swath of satellite spectrum for new 5G services.

Tied into the C-band transition, CTS has been shifting its satellite distribution from the SES-11 bird to SES's AMC-11 satellite, a process that will be wrapped up by the end of October.

Although CTS's new terrestrial-based system takes aim at the IP video future, it has no specific timetable to convert affiliates to the new platform or any current plans to phase out the legacy, satellite-based option.

"For the foreseeable future, we're planning to operate both," Olien said, noting that CTS will continue to consult with operators on when it makes sense for them to make the move. "I think the market will help us dictate where things go."

More services on the horizon

While the terrestrial platform has been made to mirror the capabilities of the legacy satellite-based system, CTS is also starting work on a second phase of the project that will focus on new services that can take advantage of the additional bandwidth available on the new, IP-based system.

Olien said that work will initially focus on delivering additional HD feeds, including more West Coast feeds, than CTS can currently deliver on the satellite platform.

It's not clear yet whether the IP-based terrestrial offering will serve as a stepping stone for CTS to syndicate Comcast's X1 or Xfinity Flex platform to small and midsized operators. Thus far, Comcast's X1 syndication activity has centered on four major US and Canadian cable operators – Cox Communications, Rogers Communications, Shaw Communications and Videotron.

"We're actively looking at a way to provide the platform piece of it," Olien said. "It's just a matter of drafting off of what makes sense within what we've done for Comcast already. X1 is somewhat of a different animal, but I think we've got other options that are already in process."