Cable One plows ahead with 'Sparklight TV'

Cable One confirmed that it has launched Sparklight TV, a new app-based pay-TV service, in five markets this month, with additional markets lined up for April.

According to an online FAQ, the new Sparklight TV service is available in Longview, Texas; Bisbee, Arizona; Altus and Duncan, Oklahoma; and Dyersburg, Tennessee. 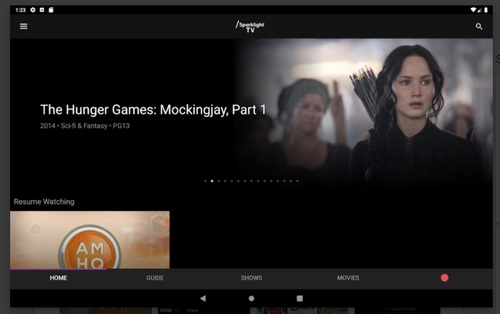 Cable One has launched its MobiTV-backed Sparklight TV service in five markets so far, with more on tap for April.
(Image source: Cable One)

Cable One is launching markets and expanding on them even as its central technology partner for that service, MobiTV, pushes ahead with a voluntary Chapter 11 bankruptcy restructuring. MobiTV's move is backed by $15.5 million in debtor-in-possession financing from a subsidiary of T-Mobile, which announced this week that it will be shutting down its MobiTV-backed "TVision" pay-TV packages on April 29 and, instead, will team up with YouTube TV and Philo.

It's still not clear how T-Mobile's decision will impact MobiTV's original plans for Chapter 11 and its hopes to find a buyer (perhaps Cable One or a contingent of smaller cable operators will step up?), or if the coming shutdown of the TVision services could make a Chapter 7 liquidation an increasingly possible outcome for the vendor. And even if MobiTV does emerge from Chapter 11, industry sources believe that the vendor could be forced to try to rework its deals to make its underlying business economically viable and sustainable.

While it has become clear that some existing MobiTV cable operator and telco partners – as well as those that were considering striking agreements with MobiTV – are exploring just-in-case alternatives, Cable One said it had no changes to report about its plans for Sparklight TV.

App stores show that Sparklight TV supports up to six simultaneous streams and a cloud DVR with up to 200 hours of storage.
(Image source: Apple)

Cable One, a cable operator among a growing group that's been emphasizing broadband over its legacy pay-TV products, announced plans for Sparklight TV and confirmed MobiTV's involvement in January. Cable One said at the time it intended to launch Sparklight TV in early 2021 and to reach all Cable One markets (there are more than 50 of them now, following a recent string of acquisitions) by year-end. The Sparklight TV FAQ notes that Cable One intends to stop offering its legacy cable pay-TV service when the new app-based service is transitioned to all markets.

According to other details about Sparklight TV that have surfaced online, the service supports several platforms, including iOS and Android mobile, Amazon Fire TV, tvOS (Apple TV), web browsers, and Android TV devices (with no support for Roku out of the chute). Per information about Sparklight TV posted on app stores, the service delivers up to three concurrent streams, with an option to upgrade to six streams, and a cloud DVR with up to 200 hours of recording space.