BT Sport sale would aid fiber rather than football focus

Like most of his fellow countrymen, although possibly not all telecom workers, Gavin Patterson always seemed more enthused by the spectacle of men kicking balls than the prospect of digging fiber trenches.

With his sculpted jawline and foppish hair, the former BT boss even looked like an overpaid sports star  certainly far more than he resembled a hardhat-wearing telecom engineer. His passion for Liverpool FC, one of England's most fashionable soccer clubs, was revealing.

Named CEO of the UK's biggest telco in 2013, Patterson flung himself at the costly business of TV sport as if money were no obstacle. The value of rights for the English Premier League alone has rocketed from £1.7 billion (US$2.4 billion) between 2007 and 2011, before Patterson became CEO, to more than £5 billion ($7 billion) between 2016 and 2019, as BT fought pay TV giant Sky for matches. 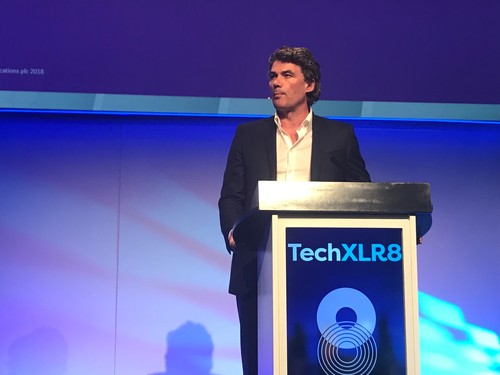 Gavin Patterson, BT's former boss, gives it his best chiseled-from-marble look at an Informa event in 2018.

Paolo Pescatore, an analyst with PP Foresight, estimates BT now spends up to a £1 billion ($1.4 billion) annually on rights.

"There is always medium- and long-term uncertainty, and beyond that there are all the production costs," he tells Light Reading. "It is a huge investment to dedicate."

Under Philip Jansen, who succeeded Patterson as CEO in early 2019, BT is no longer so keen. After reports first appeared in the UK's Telegraph and Financial Times newspapers, it has confirmed talks are underway about a part-sale of the sports business. Interested parties already named in those newspaper reports are likely to include Amazon, Dazn and Disney, says Pescatore.

"Further to media reports, BT can confirm that early discussions are being held with a number of select strategic partners, to explore ways to generate investment, strengthen our sports business, and help take it to the next stage in its growth," read BT's statement.

"The discussions are confidential and may or may not lead to an outcome."

Jansen's main priority is the full-fiber rollout that Patterson did not execute. It will cost the operator about £12 billion ($16.7 billion) over the next few years to extend those networks to a total of 20 million UK properties. The rollout of 5G, a high-speed mobile technology, will also consume resources.

Sport has been hard hit by the pandemic, says Kester Mann, an analyst with CCS Insight, in a blog. Among other factors, the closure of pubs and clubs where soccer is screened has cost BT between £8 million ($11 million) and £10 million ($14 million) in lost sales each month, he reckons.

The referee is still out on whether BT Sport has scored any goals at all.

"Tenuous estimation of revenue streams and indirect benefits has been required to justify rights cost," said Jefferies, a bank, in a research note today.

"Sport's value as a retention tool was diluted by Sky switching to a less aggressive broadband strategy."

Mann points out that average spend among broadband customers has continued to slide since BT started charging for sports content.

Yet Pescatore thinks it unfair to be completely dismissive.

"They have done a good job of marrying content and connectivity and the business itself has got to the point where it is self-sufficient," he says. The current problem for the operator is what comes next.

"Given the investment drive BT has now, they can't take sport to that next level," says Pescatore. "They want to continue, and the best way is some form of partnership."

A deal will be difficult to finalize in the current environment, though. Pescatore thinks the whole market is due for a "reset" after years of spiraling costs for TV rights.

The recent fiasco over the European Super League, a hastily aborted plan by club owners to set up a rival competition, has drawn attention to the widening gap between soccer's haves and have-nots.

The haves, says Pescatore, "feel they can secure whatever funding with a disregard for other clubs and the impact on devaluing leagues. The business model is unsustainable."

Simon Green, the head of BT Sports was quoted last year saying that he believed the pandemic would accelerate a decline in the value of sports rights.

But fresh competition from over-the-top players could have the opposite effect if the auction process endures. Pescatore doubts that Dazn has the appetite or wherewithal to part-acquire BT Sport in that scenario. After forking out for rights, it would face a similarly big bill for production costs, he says.

He thinks Amazon is the likeliest candidate. It has already bought some rights and formed a production partnership with BT.

The sale of a stake in the sports business would essentially build on an existing relationship between the two companies. Nor is Amazon constrained financially, with its $386 billion in revenues and $21 billion in net profit last year.

Any stake sale would obviously be seen as a retreat from non-connectivity business for the UK telecom incumbent. But it could "alleviate the heat" on BT, says Mann, and bring fresh ideas and expertise. One way or another, the game looks set for change.