AT&T and Verizon media bets were mad, bad and dangerous

In a sane and fair world, anyone paid $32 million in a single year should either have found a cure for cancer or be Einstein's successor. Randall Stephenson, who collected that amount in his final year as the boss of AT&T, is proof the world had lost the plot long before coronavirus came along. His last big move before exiting the stage was to splurge $85 billion on Time Warner, a content emporium of popular shows and blockbuster flicks, and marry this to AT&T. Deficits of common sense do not run much deeper.

It was as if Stephenson, an ageing Clark Kent lookalike without the superhero powers, had dozed off and missed a whole decade. His entire rationale was that a "vertically integrated" telecom and media business would be a sure winner. This was the kind of language the telecom sector was using in the early 2000s, when operators tried cultivating elaborate "walled gardens" of content that only their subscribers could access. But that was before the Internet companies outgrew telcos and smashed the whole edifice into smithereens. Stephenson appeared not to have noticed.

He was obviously aware of the Internet companies, though. His belief was that AT&T would never be able to compete against the Netflixes and Googles without the vertical integration the Time Warner takeover would bring. The logic is seriously messed up. The success of Netflix, today worth roughly the same as AT&T, has come partly because it shirks vertical integration, not in spite of it. Mirroring AT&T by acquiring a telecom operator would be the worst move it could make. 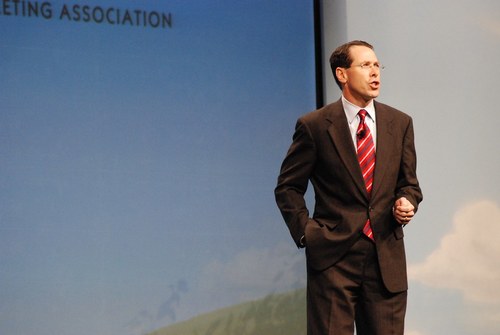 Stephenson could never satisfactorily explain what telecom advantage Time Warner would give AT&T over T-Mobile, the country's fastest-growing operator, in a world where content and distribution are no longer as inseparable as Superman and spandex. It was a struggle to understand how Time Warner's content and AT&T's data could be combined for targeted advertising. Having to think hard about the merits of a deal is never a good sign.

That deal is now in tatters after AT&T, following years of indigestion, this week disgorged the renamed WarnerMedia asset and agreed to merge it with Discovery, another content emporium. In a reversal of vertical integration, the deal shifts about $43 billion in net debt off AT&T's balance sheet and leaves AT&T shareholders with a 71% stake in the new business. The initial response was a 6% drop in AT&T's share price on May 18.

Stephenson was not the only top executive to have a brain fart about content. One morning in 2015, Lowell McAdam, then head of Verizon, AT&T's number-one rival (for now), woke up with no apparent recollection of the previous 16 years and decided to spend $4.4 billion on AOL, an Internet property that had been in decline since 2001, the year of its own epoch-defining but catastrophic $164 billion merger with an earlier incarnation of Time Warner.

Failing to notice AOL's irrelevance, or that advertising dollars were making a beeline for younger Internet firms such as Google and Facebook, McAdam must have thought he was getting a bargain. Two years later, he followed it up with a $4.5 billion purchase of Yahoo, a turn-of-the-century search-engine supremo that had subsequently been eclipsed by Google. Not even the revelations of a data breach affecting more than a billion Yahoo customers would make Verizon's boss reconsider. All it did was lower the original purchase price by $350 million. 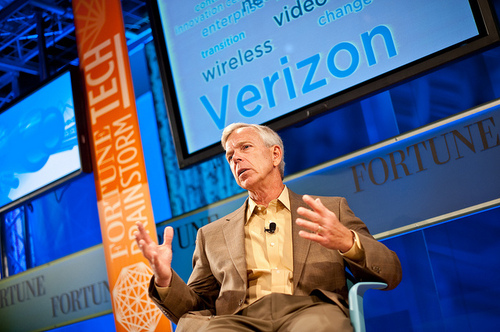 Lumped together, renamed Oath, AOL and Yahoo soon had investors muttering curses when Verizon booked a $4.6 billion impairment charge on its media business for 2018. Thousands of job cuts followed, but not for McAdam, who had parachuted out of the company in August that year with an estimated $27 million in what Verizon calls "separation payments." Those, it pointed out, were "nearly five times his base salary plus short term bonus."

Under new leadership, Verizon is now retreating ignominiously from its disastrous foray into the world of media. Two weeks ago, it agreed to sell 90% of the business to Apollo, an asset-management firm, for just $5 billion. It will revert to the Yahoo brand but after its bludgeoning inside Verizon will never regain its earlier mojo.

Time Warner and Yahoo today are very different beasts. What unites them is their experience of being acquired by telecom operators that should have known better. The mistake that both Stephenson and McAdam seemed to make was to assume there was a natural fit between telecom and media simply because most of today's content uses telecom infrastructure. By the same logic, the firms that build roads should also make cars, printers should acquire book publishers and cafes should grow coffee plants.

Perhaps the mistake is better seen as a desperate plunge into an adjacent industry that looked far sexier. And no wonder Stephenson wanted to be more like Netflix. Its share price is now worth 12.5 times more than it was a decade ago. AT&T's, over the same period, has shrunk 6%. The trouble is that Internet envy has gobbled up billions of dollars and consumed attention. While AT&T was trying to mate clumsily with Time Warner, T-Mobile was cruising past and laughing at the spectacle.

Across the Atlantic, it is dawning on BT that billions spent on expensive TV sports rights in recent years should really have gone into networks. Led by former boss Gavin Patterson, the TV push has brought few obvious benefits for the former state-owned monopoly. It invested nearly £800 million ($1.1 billion) in TV rights last year and yet its broadband customers spent less per household than the year before. Patterson's soccer obsession and networks neglect mean the UK now lags most other European countries on full-fiber rollout. Philip Jansen, his successor, is racing to fix that. Besides pumping money into network deployment, he is in talks about a possible sale of a TV stake.

Some telecom analysts are applauding these moves. "Good to see more telcos exiting ill-conceived content and media businesses," said Dean Bubley of Disruptive Analysis in a blog posted on LinkedIn. "Instead of chasing Netflix et al, they should have invested $$$ in R&D, systems integration capabilities or partnerships, B2B specialism in specific sectors as well as software and AI skills." 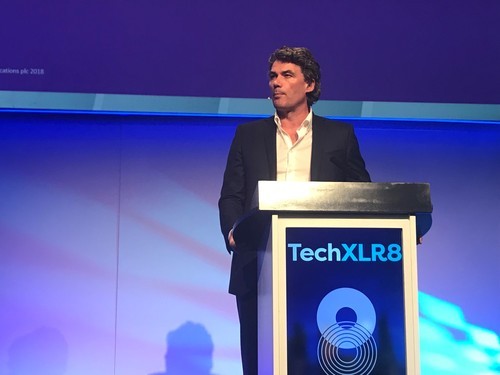 Gavin Patterson prioritized sports content over network investment while in charge of BT.

Unfortunately, earlier strategic bungles mean changing course will be difficult. AT&T's long-term debt rose $40 billion between 2016 and 2020, to nearly $154 billion. It will drop by a similar amount with the WarnerMedia spinoff, but sales and profits are also under pressure. Revenues sank 5% last year, to about $172 billion, and AT&T recorded a $3.8 billion loss, despite cutting about 17,000 employees from the payroll.

Europe's operators have been divesting assets and slashing jobs to reduce their own high levels of debt. But even the merest suggestion of spending more on the core networks business meets with shareholder skepticism. Vodafone's share price lost 9% of its value yesterday and was trading 2% lower at the time of publication after executives laid out this year's priorities. Their crime? To think of spending 8 billion ($9.8 billion) in capital expenditure, an increase of only 150 million ($183 million) on the previous year. Investors, it seems, would have preferred chunkier short-term profits.

Put simply, nobody is convinced telecom investments will pay off. Even Vodafone, as it continues hacking into costs, is guiding for only a "mid-single-digit" increase in basic profits over the medium term  hardly exciting stuff. Its vague talk of new "digital" services for business customers was not inspiring, either. The 5G technology it began rolling out nearly two years ago in the UK has provided no apparent uplift for mobile service revenues, which fell 3% year-on-year in the recent fourth quarter.

And while some operators were losing billions on bad media bets, Internet giants were advancing from the other direction. Any opportunity for telecom operators to create the software platforms for the "edge"  supposedly, the next big thing  disappeared when Verizon and Vodafone began using AWS Wavelength instead. Even Ericsson has now quit the edge game. 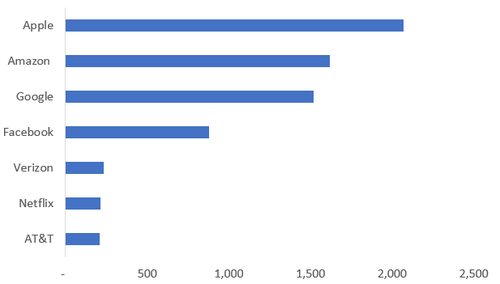 Meanwhile, Vodafone Business, one of the main beneficiaries of Vodafone's capex plans, roars enthusiastically about its partnerships with Microsoft, Google and Amazon. Yet judging by the relationships those same tech firms have with numerous other telcos, these are clearly not exclusive. And does anyone seriously think operators contribute most of the value in these tie-ups?

It is at least encouraging that parts of the industry have finally realized telecom has no business in media. The activities of AT&T and Verizon, in particular, have been extravagant and dumb. In distracting them from issues of greater strategic importance, and gobbling up resources, their bad bets on media may cost those companies for years.

Like what we have to say? Click here to sign up to our daily newsletter
COMMENTS
Newest First | Oldest First | Threaded View
Add Comment
Be the first to post a comment regarding this story.
EDUCATIONAL RESOURCES
sponsor supplied content
(eBook): 5G Testing for the Race to Revenue
Trends in the Communications Industry
How to Gain the Edge in the Fiber Broadband Boom
A new approach to billing for a new generation of customers
CBRS Spectrum and the Future of Private Wireless Networks
Smart Edge: Productizing Edge Deployment
Interview: Open RAN enabling CSPs to deliver on the promise of 5G
Keynote: Open RAN: The Next Step
Educational Resources Archive
More Blogs from Morris Lore
Public cloud holds perils, and don't expect an 'open' RAN with it