Amino Technologies among bidders for MobiTV

Amino Technologies, a UK-based provider of video software and IP video devices, has revealed itself as a bidder for the assets of MobiTV, a video streaming tech and infrastructure provider that filed for voluntary Chapter 11 bankruptcy in early March.

Amino noted that a possible acquisition of MobiTV would enable the company to establish a TV-as-a-service infrastructure capability in the US. If Amino does acquire MobiTV, the company said it would pay for the acquisition through its existing cash resources and available credit facilities, supplemented by an offer of shares. 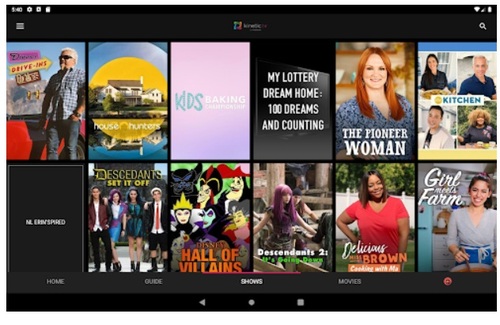 KineticTV, Windstream's streaming pay-TV offering, is among dozens of services that are powered by MobiTV's platform.
(Image source: Google Play)

Amino and MobiTV are not strangers  they have inked multiple agreements in recent years, including one going back to 2012 involving the integration of Amino set-tops with MobiTV's technology platform. A more recent agreement, announced in July 2019, involves the combination of the MobiTV Connect app-based TV platform with the AminoOS Enable operating system.

Though Amino is the only bidder to make its intentions public, it is clear that multiple entities submitted bids for MobiTV by the May 7 deadline. According to documents filed today with the US Bankruptcy Court of the District of Delaware, an auction for MobiTV's assets will be held via Zoom starting Tuesday, May 11, 2021, at 10 a.m. ET, "to determine the highest and best offer for substantially all of [MobiTV's] assets."

According to Amino, a hearing before the court to request approval of all aspects of the sale to the winning bidder is scheduled for May 21, 2021, at 2 p.m. ET. An acquisition of MobiTV's assets must close by May 31, 2021, Amino added.

It's not yet known how many entities, organizations or companies put in bids for MobiTV's assets or will participate in this week's auction. The National Cable Television Cooperative (NCTC), which has a deal with MobiTV dating back to 2017, told its membership of independent cable operators and telcos last month that it was aware there were about 25 entities reviewing investments in or purchasing MobiTV.

Word that there are multiple bidders offers some firm hopes that MobiTV will emerge from the Chapter 11 process and continue to supply technologies and infrastructure to dozens of US cable operators and telcos that currently are using MobiTV's platform to underpin app-based pay-TV services. That group includes Cable One/Sparklight, Consolidated Communications, MCTC, Vast Broadband, Windstream, C Spire and EPB, among several others.

A unit of T-Mobile provided $15.5 million in debtor-in-possession (DIP) financing to help keep MobiTV running and stable through the bankruptcy process. But it's abundantly clear that T-Mobile, once a key customer of MobiTV's, has no plans to bid for MobiTV's assets – T-Mobile shut down its own TVision OTT-TV service on April 29. Rather than sticking with its own pay-TV service, T-Mobile went in a completely different direction, opting to strike co-marketing/distribution deals with two virtual multichannel video programing distributors (vMVPDs): YouTube TV and Philo.

As MobiTV moved through the bankruptcy process, several other vendors, including Minerva Networks, Adara Technologies, MediaKind, Tangerine Global, and a startup called Shift 2 Stream, have identified themselves as potential alternatives to existing MobiTV customers as well as to operators that were still mulling decisions. Other suppliers, including Innovative Systems, are also among those that provide technologies and services that fit into MobiTV's traditional focus on the tier 2/3 service provider market.

Meanwhile, NCTC has urged members to stick with MobiTV and help it survive the Chapter 11 process. The suggested options put forth included an "investment consortium of members," price hikes on the MobiTV service and minimum penetration commitments.

"We believe the best outcome is the continuation of MobiTV," the NCTC explained in its letter to members, pointing out that about 90 of its members use MobiTV today, with another 16 that were pending launch. "Moving to another solution quickly is fraught with risks and various costs."

Raising prices along with minimum commitments could help to fill some holes in MobiTV's financial structure and overall business model. Meanwhile, the pandemic has played a role in slowing down MobiTV's deployment momentum.