Taking a page from Comcast's "Flex" playbook, Altice USA has introduced a 4K-capable streaming device targeted to broadband-only customers in its Optimum and Suddenlink service areas. 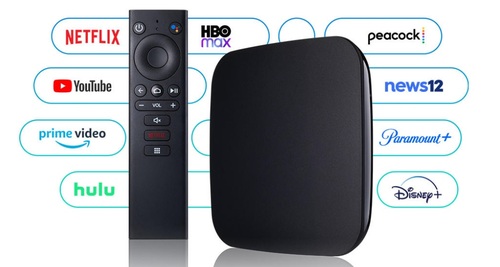 Rather than developing Stream and app integrations on in-house software  something Comcast accomplished with its Flex platform/device for broadband-only customers  Altice USA is leaning on Android TV and the multitude of SVoD and live TV streaming services, such as Netflix, Disney+, HBO Max, NBCU's Peacock and Altice USA's own i24News and Cheddar News offerings, that are available via Google Play. Altice USA's Stream device also supports voice commands via a Google Assistant button built into the remote control.

Altice USA is launching Stream amid a broader trend in which service providers continue to see broadband growth  and the demand for higher speed service tiers  rise even as their pay-TV subscriber bases erode.

Altice USA is just one of a growing group of service providers that are deemphasizing traditional pay-TV amid a greater emphasis on higher-margin broadband and support for third-party streaming services.

Speaking to CNBC earlier this year, Altice USA CEO Dexter Goei reckoned there will be a day when the company no longer offers a linear cable pay-TV service as the economics of doing so continue to deteriorate.

"I can't tell you when, where and how, but it's a question of time for cable operators in general to completely re-evaluate whether or not they're going to be in the video business," he said.

Altice USA's focus on Stream with 1-Gig customers also enters the picture as a growing portion of its base of new customers gravitate toward that high-level tier. For Q1 2021, Altice USA reported that 43% of its gross broadband subscribers in 1-Gig areas took that top speed, up from just 13% a year earlier. Meanwhile, the company's 1-Gig service penetration levels reached 9.8% in Q1 2021, up from 2.4% in the year-ago quarter, the company said.

With DOCSIS 3.1 deployments on hybrid fiber/coax (HFC) networks and fiber-to-the-premises upgrades included, Altice USA has 1-Gig speeds available to about 92% of a footprint that includes the Optimum areas in New York, New Jersey and Connecticut and the more rural Suddenlink areas.