Roku Retains the High Ground in US Streaming Battle

Assisted by the momentum it's seeing with TV makers integrating its operating system, Roku's streaming platform has held onto its already solid lead in the US over rivals such as Amazon (Fire TV), Apple (tvOS) and Google's Android TV through the early parts of 2019, according to Strategy Analytics.

The study found that Roku's streaming platform accounted for more than 30% of US sales of connected TV devices in Q1 2019, and now counts more than 41 million Roku-powered devices in use, including standalone streaming media players and smart TVs from partners such as RCA, Sharp, Hisense and TCL.

Roku, Strategy Analytics found, now has a 36% lead over the next major platform, the Sony PlayStation, with respect to devices in use, and accounts for about 15% of all media streaming devices. 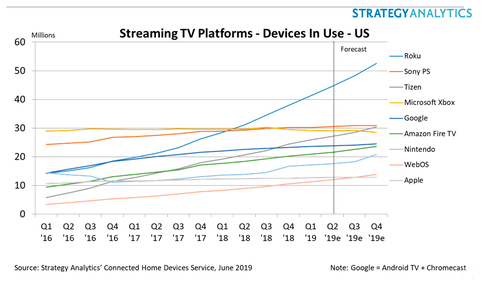 Notably, Roku has been able to hold onto this lead even as player revenues become less and less central to the company's revenue story and as its broader streaming platform becomes the core of its business. In Q1 2019, Roku player revenues reached $72.5 million, up a respectable 18% year-on-year, but were dwarfed by the company's Platforms-related revenues, which jumped 79%, to $134.2 million. Roku's Platform business encompasses advertising, subscription revenue sharing and license fees from TV makers that use the Roku OS.

Strategy Analytics points out that Roku has established its lead in the US through a mix of factors, including a comprehensive search function, a simple UI, affordable hardware and regular software updates and feature enhancments. However, the Roku brand is not as well known outside the US, which could impair its ability to extend its platform on an international scale, the research firm said.

Android TV tuned to pay-TV providers
Though Android TV has seen limited traction in the retail space, the platform is making a name for itself in the service provider market. The Operator Tier flavor of Android TV can run on relatively inexpensive, operator-supplied streaming boxes and boot-up to the pay-TV operator's video app while still supporting Netflix and other third-party apps provided through Google Play.

Several suppliers with strong ties to the service provider market, including TiVo, MobiTV, Evolution Digital and Amino, have adopted and developed Android TV Operator Tier-based offerings. In April, Android TV reportedly had 140 pay-TV operators signed up worldwide, up from just over 100 toward the end of 2018.

In that market, Android is running up against the Reference Design Kit (RDK), a pre-integrated software stack for set-tops and gateways managed by a joint venture of Comcast, Liberty Global and Charter Communications. Comcast, meanwhile, has parlayed that into an X1 syndication business that, so far, has lured in a handful of major North American MSOs -- Cox Communications, Shaw Communications, Rogers Communications and Videotron -- and generated ongoing discussions with Charter.