Revealing a few more technical details behind a recently launched prepaid satellite TV service, Orby TV has hooked up with Eutelsat Americas to supply critical capacity for a multichannel offering that starts at $40 per month.

Orby TV, which soft-launched in January ahead of a wider commercial launch in the spring, is delivering pay-TV service using the Eutelsat 117 West A satellite (Ku-band) to the lower 48 states of the continental US. Orby TV's in-home receiver blends those satellite TV-delivered channels with local broadcast TV captured using digital over-the-air antennas and combines it all in a unified guide.

Michael Thornton, Orby TV's CEO, said his company put out a request for proposal for the transponder piece and received three "serious bidders" before going with Eutelsat.

Piecing together a prepaid puzzle
That work with Eutelsat also hits on a bigger angle Orby TV took to get its prepaid TV service off the ground. Rather than having to launch satellites, lock down spectrum and build the underlying platform from scratch, Orby TV was able to assemble its puzzle largely from preexisting pieces.

Thornton, an exec who is late of both DirecTV and Starz, recalls when satellite TV service providers had to do everything themselves. "Now you can do it with third parties," he said.

He said Orby TV was aided by the fact that multiple box makers already made satellite/OTA combo devices, and ultimately went with a box made by Kaon. Orby TV sources its dish and antennas from suppliers in Taiwan and China, respectively, and tapped Alticast for the service's video software elements, including the on-screen guide. 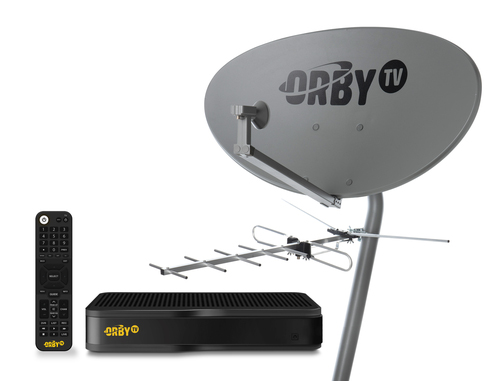 Thornton said Orby TV was created to provide the market an inexpensive, prepaid and satellite-delivered service that could play well not only in rural regions that are underserved or unserved by broadband, but could also serve a role in some urban locations among consumers who don't want to be caught in multi-year contracts or maybe can't qualify for a post-paid pay-TV service.

"The initial thought was pay-TV is too expensive," he said. "It seems to have gotten out of control."

Orby TV isn't alone in pursuing a prepaid model for pay-TV. Vidgo, an OTT-delivered pay-TV service, has also hung its hat on the model. Comcast, meanwhile, has a couple of prepaid TV permutations available in its US footprint -- a standalone version using older QAM-based set-tops and an app-based streaming option that requires customers to also take Comcast's prepaid Internet service. Verizon also has prepaid options for Fios TV.

While all of those prepaid offers allow customers to come on and off the service each month as they please, Orby TV's platform also continues to update the guide on the box and integrate the available free over-the-air TV channels. Thornton reasons that keeping this base level of service active also gives viewers a look at what is on the paid service and might entice them to jump back in.

Thornton said Orby TV went after a distinct group of programmers to help it build a lineup that allowed it to stay in the $40 range. Some channels and programmers not in the mix today include Disney/ESPN/Fox.

"The programmers that we don't have are in large part really expensive and unwilling to break up any part of their bundle," he said. "We'll continue to look for ways to bring them on, and if there are creative ways we'll definitely consider them. But we feel that we're in pretty good shape at the moment."

Orby TV sells its baseline receiver for $100, and one with an integrated DVR with two tuners for $200. Its "strongly recommended" $150 pro install option (offered in partnership with MasTec) includes the install of the satellite dish and antenna and wiring for service in one room (additional rooms installs run $50 each). A self-install kit costs $85 and includes a satellite dish, antenna and mounting hardware.

Orby TV doesn't currently have a TV Everywhere offering that provides OTT access to some channels offered in the package when customers are on the go, but Thornton said work is underway to enable customers to authenticate on individual programmer-run apps.

Though prepaid is Orby TV's primary model, is also trying out a rental option starting at $55 per month (for one room) and up to $85 per month for a four-room set-up. However, Orby TV requires a credit check and a two-year commitment for the rental option, though customers get 30 days to try it out.

Orby TV sells directly online and through a group of independent dealers, and is sold at Best Buy and select Target stores. Orby TV isn't disclosing subs numbers, but Thornton said the company is meeting expectations and has customers in all 48 states where it offers service.

"It's no small feat to launch a new brand in a crowded space," he said. "We feel we're on a good path."

Break-even in sight
With fewer than 20 full-time employees, Orby TV is agile and running lean. It's backed by an unnamed financial investor, and Thornton believes the company has enough in the bank to get to break-even, and to reach that point by sometime in 2020.

"Based upon the model, it is a modest amount of subs that get us to break-even -- it's tens or low hundreds of thousands as opposed to millions of customers," he said. We think it's important to be privately-held and important to be sort of an upstart that has the ability to move quickly and disrupt certain parts of this industry."

Clifton K Morris 9/13/2019 | 11:41:37 AM
Orby has lower overhead than comcast. Customer reviews for the service (at least on big box retailers websites like Best Buy) seem to show that customers overwhelmingly prefer Orbys options like lower-cost pricing and self-service websites to quality-of-service (such as 4K) broadcast services.

On that note, I dont expect to see Comcast race to upgrade to 4K... or for that matter, push its NBC subsidiary to upgrade to a 4K broadcast standard either. Comcast seems busy building two theme parks in China, where exactly zero of their TV customers exist.