AMSTERDAM -- IBC2018 -- Video, we are constantly told, is the application that is filling up networks and driving capex-hungry capacity upgrades. And that trend is not expected to stop: Ericsson's Mobility Report suggests that mobile video traffic volumes will grow by 45% annually between now and 2023 and "account for 73% of all mobile data traffic," while Cisco's Visual Networking Index (VNI) suggests video will account for 82% of all IP traffic (annual run rate of 3.3 zettabytes) by 2021.

That, in turn, would drive demand from network operators for video delivery and management technology and create a business opportunity for the equipment vendors that already have procurement relationships with the network builders. The logic seems sound, and, indeed, drove acquisition sprees by Ericsson and Cisco in the past decade.

So why are the major communications networking vendors, including those predicting ongoing video traffic growth, offloading their video technology assets en masse?

Is there no money to be made? Dr. Abe Peled, who is chairman of Synamedia (the company being based on Cisco's video assets), suggests there is: The company he will chair will have revenues of $850 million and be EBITDA positive from the get-go, he says. (See Synamedia Plots Its First Steps Around Streaming.) 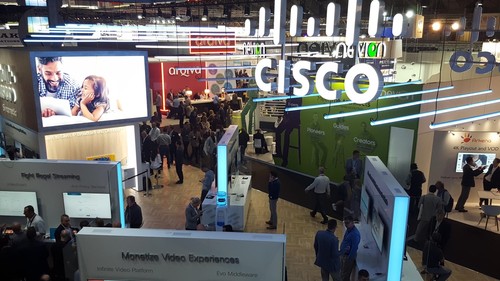 Cisco's stand at IBC2018 -- next year the name on display will be Synamedia.

The problems encountered by those major vendors appear to be more to do with focus and financial management.

The management team at MediaKind, the new name for the Ericsson Media Solutions outfit, has made no secret of the lax financial controls at the giant Swedish vendor that resulted in significant losses, even while new business was being won. Under new CEO Borje Ekholm, costs have been cut significantly, Light Reading has been told, in the build-up to the stake sale to One Equity Partners (the deal is set to close imminently). The MediaKind team is bullish about its ability to build a profitable business and has been fleshing out its market strategy during the IBC show: Tight fiscal management and a laser focus on the IP video and cloud-native system needs of its customers is at the heart of its efforts.

Leadership by a management team that is focused on the needs of the video market has also been highlighted by Synamedia and the Nokia video team as being important to success.

As Paul Larbey, the current CEO of Nokia's video business who will become the CEO of Velocix, told our sister publication Telecoms.com: "The video segment requires a level of specialism from the technology through to sales which becomes difficult to do when you're in a big company  Sales cycles are different, customer management is different. The separation allows for agility in a much more dynamic industry."

There's also the challenge of an overcrowded market -- there are just too many companies trying to win the same business, making economies of scale almost impossible. "There are too many companies chasing too few dollars," says independent industry analyst Paolo Pescatore. "The big vendors thought they could diversify into the video market but they failed, and while video traffic is growing, operators have never put video capabilities at the core of their operations."

Even so, the opportunity for vendors to cash in, at least to some extent, has been there, reckons Pescatore. "It's incredible. These companies haven't been able to make any money. The key problem is that telcos don't really want to invest in video technology -- the latest example has been the lack of investment in LTE broadcast capabilities."

Soon, MediaKind, Synamedia and Velocix will all be independent players in this market, determining their own strategies and mastering their own domains: How they perform in the coming year will tell us whether the big vendors weren't the right vehicles for those assets or if those businesses just aren't the right ones for the market.

John Wick 9/20/2018 | 10:19:51 PM
Re: Synamedia - "EBITDA smartcric, star sports live, mobilecric match Positive" Synamedia is going to do awesome now. this will also reflect in its NYSE stock. If such EBITDA improved continues then I expect this stock to get double in 1-2 yrs.
Reply | Post Message | MESSAGES LIST | START A BOARD

James_B_Crawshaw 9/20/2018 | 6:37:31 PM
Synamedia - "EBITDA positive from the get-go" For a business that has been around since 1988 I would rather hope they were EBITDA positive by now. In fact it would be very odd if they are not significantly net income positive and cash flow positive. How else is Permira going to be able to saddle it with debt to make a return?