Comcast pulled the remote DVR scheduling function from its Xfinity Stream app for mobile devices and web browsers in November 2017 following a "limited exclusion order" handed down by the International Trade Commission (ITC) favoring TiVo. That represented just one scrum in an extended patent battle occurring between Comcast and TiVo at the ITC and in multiple US civil courts.

At the time, Comcast said it disagreed with the ITC's ruling as it prepared to appeal, arguing TiVo's patents were obsolete and that the MSO had independently developed the underpinnings of its X1 video platform.

Comcast is alerting Xfinity Stream app users that the remote DVR scheduling feature has been reinstated.

Comcast restored the remote DVR recording feature on Monday, September 23. Xfinity Stream users were presented with a pop-up indicating this functionality was now available to them in the app. That restoration comes weeks after the patents that formed the basis of the ITC ruling expired, and after the Patent Trial and Appeals Board (PTAB) invalidated them. 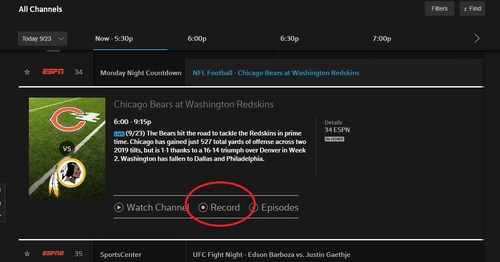 TiVo: Patent expirations have 'no impact' on its licensing deals
TiVo, which is in the process of separating its products business and its intellectual/licensing business, said the expiration of those patents have no bearing on Comcast's decision to reinstate the remote DVR scheduling feature and is a further indicator of the value of TiVo's intellectual property.

"The expiration of these patents has no impact on TiVo's licensing deals. Patent expiration occurs in the ordinary course of business and we plan for it," Arvin Patel, executive vice president and chief intellectual property officer at Rovi Corp. (a unit of TiVo), said in a statement to Light Reading. "Comcast's decision to reinstate the remote DVR functionality is an implicit admission of the value of TiVo technology. It shows that their comments calling TiVo patented technology 'obsolete' was a false statement from the beginning."

Comcast, of course, has a different opinion. "While we disagreed with the ITC's decision, we removed this feature while pursuing an appeal," a Comcast spokesperson said in response to TiVo's statement on this matter. "Our position has always been that these patents were invalid -- which the Patent Office has confirmed -- and that it was wrong for Rovi to deprive our customers of the use of a feature we created and that Rovi didn't invent. Rovi's aging and increasingly obsolete portfolio has little if any relevance to Comcast's independently developed technology."

Multi-front legal battle
TiVo and Comcast have been punching and counter-punching in the courts for months, with neither side willing to buckle. TiVo has continued to hit Comcast with additional suits asserting more patent claims that, it hopes, will cause Comcast to remove important features from its service or compel Comcast to sign a new deal. Meanwhile, Comcast has tried to neutralize TiVo's asserted patents at every turn while arguing the cable operator developed its X1 technology in-house.

Of recent note, a judge at the ITC issued an initial determination in June that Comcast had not infringed on three asserted claims by TiVo, but did infringe on two claims that might cause Comcast to disable what's viewed as a minor feature that highlights search results that come from inquiries entered into the MSO's video platform using a remote control. However, disabling those highlights would not prevent the search results from being presented.

Speaking on the company's Q2 earnings call in July, recently named TiVo CEO David Shull stressed that TiVo is "committed to this lengthy legal process," holding that the company has "hundreds" of patents it believes are related to Comcast's X1 platform.

The TiVo/Rovi license with Comcast expired on March 31, 2016. Comcast, whose X1 platform is a core element of its own video platform and central to its X1 syndication agreements with cable operators such as Cox Communications and Rogers Communications, is the only major US pay-TV provider that did not re-sign a licensing agreement with TiVo/Rovi.