Immigration, a looming trade war, the impact of global warming there are many issues that could rile today's world leaders. But what's really upset Malcolm Turnbull, Australia's current prime minister, is the disruption to sports coverage -- and specifically footage of this year's soccer World Cup in Russia -- at Optus, one of Australia's biggest network operators. Never get between an Aussie and his sport. And make damned sure you don't get between an Aussie prime minister and his sport.

Optus Administration Pty. Ltd. appears to have scored the event's best off-the-pitch own goal with a streaming service that is good for freeze frames at inopportune moments, but not much else. According to a report from Australian newspaper The Sydney Morning Herald, it has "surrendered" its exclusive coverage of the soccer extravaganza to SBS, a local broadcaster, for two days, while it tries to figure out the problem.

One imagines Turnbull arriving home from a hard day at the golf course (it would have been a Sunday), slipping into his jimjams and cracking into a cold Foster's before disappointment strikes. Faced with similar catastrophe, most of us are forced to use a customer services hotline, or even deal with a dreaded "chatbot," at the same time as the rest of the country. But there are some perks that come with prime ministerial status. Rather than dialing the usual Optus helpline, Turnbull went straight to Allen Lew, the Optus CEO, and gave him the customary ear-bashing instead. 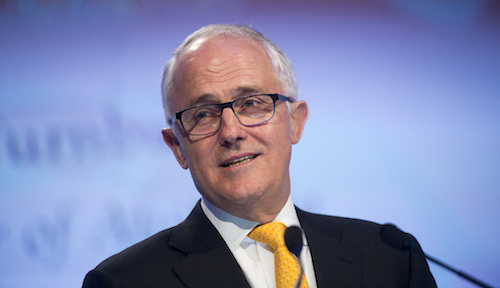 Of course, it wasn't reported that way by Australia's press. "I had a call with Allen Lew, with Optus, to seek his assurance that the failures in the streaming service have been rectified," Turnbull is quoted as saying. Later on Monday, however, SBS was reported to have reached its agreement with Optus to "simultaneously" show World Cup matches until the middle of this week.

Given the popularity of any kind of sport Down Under, the disruption has probably done some reputational damage to Optus, Lew reportedly conceded. By the same measure, one might assume it has led to a surge in approval ratings for Turnbull. Who knows? Without his dramatic, customer services intervention, there might have been several days of buffering, with no alternative for soccer-starved Australians.

As it happens, politicians from the opposition Labor party have weighed in, blaming the crisis on the government itself. SBS, it seems, was unable to secure the full rights to this year's World Cup because of public sector budget cuts that happened a few years ago under the current government. The implication, of course, is that Australians would never have had to rely on that dire Optus service if only Turnbull had not been such a shortsighted penny-pincher.

As it transpired, Optus ended up with rights to the entire event, with SBS landing a deal to show the matches involving Australia, besides a few other games at group stages, reports The Sydney Morning Herald. Beset by problems and the negative publicity surrounding them, Optus is currently insisting that a relatively small number of customers are experiencing difficulties, and mainly those trying to watch matches on Apple devices.

That will be small consolation to the affected viewers. But one can breathe a sigh of relief the situation wasn't so much worse. Imagine if it were cricket at stake.