TiVo Tunes In to Cable's IP Video Migration, Use of Android TV Boxes

Suppliers of set-tops and video software have certainly seen better days. Most companies in that category have developed next-gen, IP-based streaming platforms that can hit all screens, but some of the nation's cable operators -- particularly those in the Tier 2/3 arena -- have either shifted the focus away from pay-TV or have opted not to plow further investments into their current pay-TV platforms.

One prime example is Cable One, which has centered its business on high-margin broadband services and away from pay-TV, shrugging its shoulders as a sizable chunk of its video base has left to get those services from complementary SVoD services or directly competitive OTT-TV offerings from the likes of YouTube TV, fubo TV, Sling TV and DirecTV Now.

Yet another group of cable operators, such as Altice USA, are continuing to deploy new video platforms, but are likewise open to striking set-top integration deals with virtual MVPDs. In that scenario, Altice USA will be looking to score a bounty when an OTT subscriber signs on through the cable operator's door.

That broader trend -- reluctance to invest more in pay-TV and a greater willingness to partner with other OTT-TV options, will continue to put pressure on vendors that have developed next-gen video platforms tailored for cable operator partners, a group that includes TiVo, MobiTV, Espial (recently sold to Enghouse), Evolution Digital, MediaKind and Synamedia.

Of that group, TiVo has seen its MVPD partnership business far surpass its direct-to-consumer retail business. TiVo is now tasked with getting existing MSO partners and new ones to climb aboard a next-gen platform that's capable of delivering multiscreen, IP-based on-demand, live TV and cloud DVR services. And instead of leaning primarily on older set-tops outfitted with CableCARD modules, TiVo is also pushing forward with an apps-based approach that gets its interface and overall experience on several retail devices as well as a new MSO-managed option that runs on Android TV boxes. 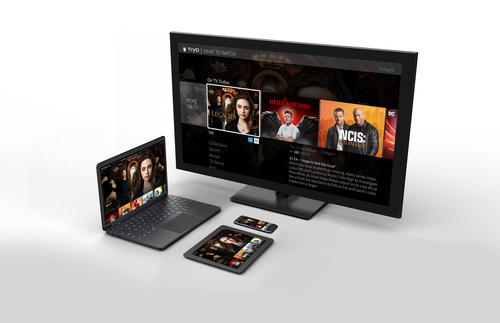 TiVo's next-gen platform is taking aim at a wide variety of screens, including the TV, using a new, apps-based approach that runs on devices powered by the Android TV Operator Tier.

While there's plenty more to do, TiVo's had a few successes with its next-gen offering: RCN was recently the first to deploy that platform; Service Electric was TiVo's first announced next-gen win; and TDS was TiVo's first win for a pure IPTV deployment. Joining that next-gen list today is Armstrong, a long-time TiVo partner that serves parts of Ohio, Pennsylvania, West Virginia and Maryland.

The plan with Armstrong is to transition from the legacy TiVo offering to an IP-based service that spans VoD, live TV, restart and catch-up services, and a network DVR. That will also include support on a range of box/client options, including MSO-supplied Android TV-based boxes and Linux-powered boxes, as well as on a mix of unmanaged, consumer-owned streaming devices -- Apple TV, Amazon Fire TV, Roku, and Android and iOS smartphones and tablets.

The key is to enable operators to push ahead with migrations at their own pace -- perhaps going with IP-VoD first before shifting to IP-delivered live TV and network DVR services, said Chris Thun, TiVo's VP of product. But regardless of the services being offered, they are all powered by TiVo's unified backend.

In that migration, it's also been important to give operators an MSO-managed box option. Alongside Linux-based boxes, TiVo will also support inexpensive streaming boxes that run the Android TV Operator Tier and boot-up to the pay-TV's experience whenever the box is turned on.

Building a new ecosystem
TiVo's next-gen platform isn't built entirely in-house. While the UI and underlying video software was built by TiVo, the company has integrated other elements, such as video processing and storage and delivery mechanisms, from several third parties. TiVo isn't naming them all, but Velocix (still part-owned by Nokia) is one example -- that vendor's media delivery platform and origin servers are being used for the TDS/TiVo IP video deployment. Other announced tech partners for TiVo's next-gen platform include Arris, Sagemcom, Vecima, SeaChange International and Technicolor.

Though some operators are less enamored with pay-TV than before, Thun said most cable operators are not ready to toss in the towel with respect to video. "As they look at the economics of the long term, we hear quite a bit  that they still see the strategic value of staying in the video business," he said.

Thun says TiVo's seeing business for its next-gen platform coming via its existing MVPD base as well as through new business opportunities from operators such as TDS. "There's a lot more going on behind the scenes."

Driving new business isn't the only focus at TiVo currently: The company is also conducting a strategic review that could result in its products and licensing/intellectual property business being spun off. Meanwhile, TiVo continues to grapple with Comcast in courts and at the International Trade Commission, with neither side willing to give up an inch.

How those Comcast cases turn out, and how rapidly TiVo can procure more deployment deals for its next-gen platform, will play big roles in determining the value TiVo can extract from its product and licensing businesses.