OTT-TV Gains Slow to a Crawl in Q3, but Cord-Cutting Does Not  Analyst

The number of subscribers gained by US OTT-TV service providers fell off a cliff in Q3 while subscriber losses by "traditional" pay-TV companies sped up. The bottom line: Cord-cutting does not appear to be slowing down.

That was the conclusion presented this week by MoffettNathanson LLC analyst Craig Moffett in his quarterly "Cord-Cutting Monitor."

Moffett stressed that the trend is not completely clear-cut because several virtual MVPDs, including PlayStation Vue, Hulu LLC and YouTube TV, don't announce or reliably provide their live-TV sub counts. But when balancing estimates with the reported numbers from other OTT-TV services, such as DirecTV Now and Sling TV , it's still pretty clear that growth in that category dropped off bigly in Q3.

With traditional US pay-TV and OTT-TV providers factored in, Moffett estimated that the overall sector lost 709,000 subs, down roughly 0.7%.

The traditional pay-TV grouping, which includes the cable operators, telco TV and satellite TV providers, combined to lose 1.12 million subs in Q3, widening from a loss of 870,000 a year ago. While that represented a record rate of decline, satellite took it especially hard on the chin -- losing 726,000 subs in Q3, while cable saw Q3 sub losses narrow to 293,000 versus 322,000 in the year-ago quarter. Telco TV losses improved to 104,000 versus 202,000 in the year-ago period. 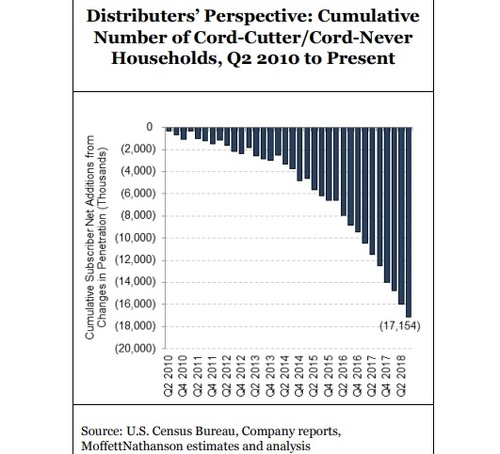 Moffett said the reason for the sub slowdown in the OTT-TV arena is hard to pin down, but suggested a set of contributing factors -- recent price increases, retaliation from legacy pay-TV providers, and "exhaustion from consumers who are disenchanted that vMVPDs aren't quite what they were cracked up to be."

But the bigger picture is that the rate of decline for all distributors hit a worst-ever -3.7% on a year-on-year basis, Moffett said.

"Absent the benefit of stronger new household formation, the underlying rate of decline would have been even worse," Moffett wrote. "To the extent that we are not seeing these new households in the subscriber data, we can conclude that cord-cutting has accelerated more than it appears based on the reported subscribership data alone."

That perhaps skewed how the Q2 pay-TV trends were viewed, as the rate of decline appeared to improve slightly -- from -3.5% to -3.3%. That decline, in Moffett's analysis, was due in large part to new household formation. (See Cord-Cutting Pace Slows in Q2.)

Moffett suggests that a "false narrative" surfaced last quarter that cord-cutting was slowing down, because the housing formation trends weren't given the full credit they deserved.

"New household formation played an unbilled but starring role" in why pay-TV's rate of decline seemed to improve in Q2, Moffett noted.

When those housing trends are given their proper weight, Moffett comes to this conclusion: "Cord cutting does not appear to be slowing at all."

Moffett estimates that there are now 17 million homes that have cut the cord or have never taken a traditional pay-TV service. There's also more than 10 million that don't take any sort of pay-TV subscription, even from an OTT-TV provider, he said.

daniel58 11/12/2018 | 11:02:11 AM
OTT_TV Gains Slow Yes while it is true OTT-TV gains from the big name OTT brand names is slowing; that does not in any way at all tell the real story that is going on behind the scenes; their has literally been an explosion of IPTV service providers that can potentially supply the same kind of comcast cable tv programming for only about $15 to $25 monthly with no contract at all; another bonus is these very same IPTV service providers are in fact offering every potential channel that can be potentially subscribed to; now in my case I am signed up with Clearstreamz as my IPTV service provider; where I get plus 2,600 digital hd channels for a mere $12 monthly and I get all of the HBO, starz, epix, cinemax, showtime, etc all of the potential cable movie premium channels. all of the video on demand content channels, all of the pay per view channel content, all of the sports pass channels for MLB, Soccer, Basketball, Football; all for $12 monthly where I was formerly paying Comcast yep $250 monthly; so now I just pay $70 monthly for Verizon Fios Gigabit Connection(equal to Google Fiber) with 945Mbps download and 905 Mbps upload and $12 monthly for Clearstreamz or $82 monthly a difference of $168 monthly or $2,016 annually in savings, or $10,080 in five years of savings, or $20,160 in ten years of savings or $40,320 in twenty years of savings; but this does not even tell the entire story; since Comcast does something very sneaky and underhanded; Comcast increases its cable tv programming rate by 6% on average every year automatcially so a $250 monthly rate in five years will go automatically in five years to $334 monthly and then $447 monthly in another five years;

so after ten years at $447monthly is a savings of at least now $365 monthly or $4,338 annually; or $21,942 after five years, or $43,885 after just ten years; or $87,770 after just twenty years or $175,541 after just forty years; so I have effectively opted out of all that nonsense buy cutting the cord on Comcast Cable TV altogether entirely and completely; and guess what I have never been happier and my only regret is not having done this even sooner!!!