Omniverse Begs for the Court's Help

Omniverse One World Television is seeking intervention from a California district court as the company attempts to resolve a lawsuit filed by several major US studios alleging that the former provider of OTT-TV services violated copyright laws.

In an ex parte application filed Monday, August 19, Omniverse and its founder, Jason DeMeo, requested that the court "compel mediation" with the plaintiffs, noting that both sides have "exchanged several offers, but have reached an impasse to settle the case" in the weeks after Omniverse shut down operations of its TV streaming service. 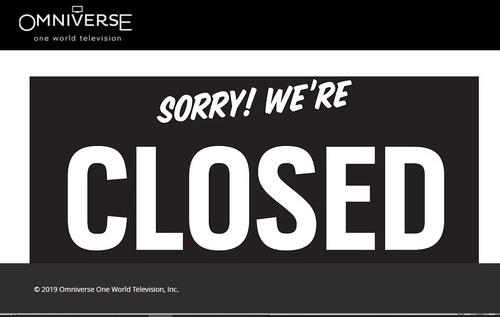 The Omniverse One World Television home page, as it appeared on August 20, 2019.

In the case filed in February, ACE alleges that Omniverse distributed TV programming to various third-party reselling partners without obtaining the proper carriage rights. Omniverse argued that was on solid legal ground, citing a joint venture with HovSat, a private cable operator based in New Jersey that, Omniverse believed, possessed a 100-year contract with DirecTV affixed with "no limitations" with respect to US distribution and delivery method.

Omniverse has since attempted to put several light years' distance between itself and HovSat while also pinning the legal blame squarely on HovSat's back. In recent court filings, Omniverse argued that if there was any infringement it was done "without malice or bad intent" by Omniverse, and was instead "caused or contributed to by third-parties such as HovSat."

And now back to where things stand for Omniverse....

Fears of a criminal investigation
In the August 19 court filing, Omniverse claims that ACE is demanding that Omniverse and DeMeo "admit to what amounts to egregious conduct in exchange for a settlement" and that the plaintiffs "intend to use such a judgment as part of a criminal investigation against Defendants." Omniverse also claimed that it has attempted to resolve the impasse with a proposed mediation that has been "flatly refused" by ACE.

Omniverse said it's seeking the mediation "because there is literally nothing left for litigation," as Omniverse has shut down its streaming service and is now unwinding its business. "There is no conduct to enjoin because Defendants have stopped the alleged offending conduct by shutting down operations."

Not mentioned in the August 19 ex parte filed by Omniverse and DeMeo is that OmniShop Media, another company evidently headed up by DeMeo appears to be preparing the launch of a service in early September called OSTV Now that will offer more than 50 "top" US TV channels, premium channels, a mix of "faith based" channels and international channels, a DVR, and up to four simultaneous streams. OmniShop Media also proclaims to be a reseller of pay-TV services from Charter Communications and Dish Network. (Charter and Dish did not respond when asked earlier this month if either currently has a direct relationship with OmniShop Media. DeMeo also has not responded to questions about OSTV Now.)

Back at the court, Omniverse and DeMeo claim that they are being coerced to settle on ACE's terms by pummeling them with "voluminous discovery requests and issuing a deposition notice, all to drive up the costs of litigation."

"Defendants are left with no choice but to ask the Court to compel mediation so that this case can be settled quickly, efficiently, and economically without wasteful and unnecessary discovery," the ex parte continued. "Discovery is moot because Omniverse has ceased operations, and proceeding with further discovery and related motions is wasteful."

Regarding the request made Monday, Omniverse wants the court to temporarily stay discovery until mediation is completed.