Hollywood Studios Fire Back at Omniverse

Hollywood studios quickly returned serve in their case against Omniverse One World Television, opposing Omniverse's request that the California court force mediation between the two and put a halt to the discovery process.

The Alliance for Creativity and Entertainment (ACE), which is representing studios such as Paramount Pictures, Columbia Pictures, 20th Century Fox, Warner Bros. and Universal in the case, filed their opposition Tuesday. They argue that the "true goal" of Omniverse and its founder, Jason DeMeo, is a stay of discovery, and that a mediation and the move to stay discovery are likewise "premature."

ACE also countered that it is entitled to "discover the extent and willfulness" of Omniverse's alleged copyright infringement.

Omniverse and DeMeo are accused of distributing TV programming to various third-party reselling partners without obtaining the proper carriage rights. Omniverse has argued that it did so legally through a joint venture with HovSat, a private cable operator based in New Jersey that, Omniverse believed, possessed a 100-year contract with DirecTV affixed with "no limitations" with respect to US distribution and delivery method.

Part of ACE's discovery process has centered on obtaining access to a record of that elusive and magical contract. After expressing confidence to Light Reading that the purported contract would shield it from legal attack, Omniverse has since backpedaled, arguing to the court that any infringement was done "without malice or bad intent" by Omniverse while also pinning the blame on HovSat.

ACE and the Hollywood studios told the court they aren't opposed to a mediation, so long as it would be productive and come after Omniverse and DeMeo "respond to the outstanding discovery they seek to avoid, so that the information central to this action's claims and defense is known to both parties."

In its request for court intervention made on August 19, Omniverse said mediation toward a resolution is proper partly "because there is literally nothing left for litigation," as Omniverse has already shut down its streaming service and is unwinding its business.

What about this OSTV Now thing?
ACE has since countered with evidence indicating that DeMeo and a company called OmniShop Media have linkages to a service called OSTV Now that is apparently scheduled to launch in early September.

Still Counting It Down 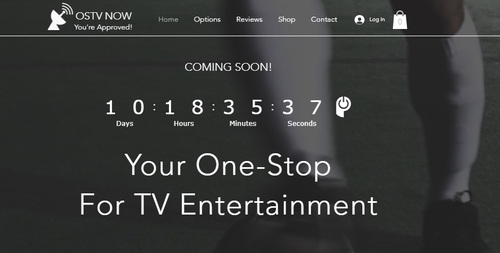 OSTV Now, a service evidently linked to OmniShop Media and Jason DeMeo, is set to launch in early September according to the online countdown. This screencap from www.ostvnow.com was taken the afternoon of Aug. 22, 2019.

"Whatever the branding, Defendants appear to be continuing their infringing practices," ACE said in its response. "These and other important facts are exactly why discovery needs to move forward."

Many details about OSTV Now, and the specific content it will offer upon launch, have not been made public. DeMeo has not responded to questions about it. The site for OSTV Now says the service will deliver more than 50 US TV channels, a DVR and multiple streams.

That disagreement was also expressed in an email sent by an ACE lawyer to an Omniverse lawyer on August 2. "Your client  refuses to agree to any terms that would include an amount, to be negotiated, of monetary damages," the ACE lawyer wrote. "That is not an impasse, that is defendants unilaterally declining to engage in good faith in a settlement discussion  We do not see what a mediation could do to move things forward if we are unable to progress further than this on our own. In our view, the evidence of record amply supports your client's liability for massive copyright infringement."

Court records also show more than 50 requests for admission to Omniverse with respect whether Omniverse streamed content and copyrighted works, and that DirecTV never told Omniverse it could stream content obtained from DirecTV. The requests also would have Omniverse admit that it has no copy of any agreement between HovSat and DirecTV that authorizes Omniverse to stream content.

In each of those dozens of requests, Omniverse responded with the same answer: "As discovery is ongoing, Omniverse has not yet been able to locate the source of or verify the accuracy of said statements and, therefore, the information known to Omniverse is insufficient to admit or deny this statement."

Omniverse, meanwhile, has put forth a fear that a stipulated judgement and the admissions that ACE is demanding are intended for a criminal investigation against Omniverse and DeMeo.

ACE said such accusations are "unsubstantiated," noting that the studios' interest "is in obtaining civil relief in the form of an injunction and damages." However, ACE said the plaintiffs would "comply with their legal obligations to cooperate with any criminal investigation" but that they likewise have "no control over that proceeding nor are they a party to it."

The aforementioned email from the ACE lawyer sent on August 2 also points to a proposed "alternative approach" that would enable DeMeo "to make a record of his motive and reasons for entering into the consent judgment, which should be more than sufficient to address the legal concerns you have expressed."

Court deals Omniverse a blow
On top of the recent back and forth on the mediation and discovery issues, the California district court handling the case dealt Omniverse a blow on Wednesday (August 21) by denying a motion made by Omniverse earlier this year.

That motion sought to have any comparisons between Omniverse and Dragon Box stricken from the case, that the plaintiffs provide a more definitive statement on its complaint, and to dismiss all the plaintiffs, except the lead plaintiff, Paramount Pictures.

ACE buried Dragon Box, a former provider of streaming boxes accused of pirating and distributing copyrighted content, in a separate case that was settled in January.

In denying Omniverse's motion, the court said that details about Dragon Box being attached to the case "are not immaterial" because the allegations concern whether Omniverse willfully infringed on copyrights.