Satellite operator Eutelsat is jumping into the cloud-based content delivery game with the launch of a new platform branded Cirrus that will support video services offered by its customers.

The operator, which serves the likes of Sky, the BBC and Bloomberg TV, has built a platform that works across various devices and includes an electronic programming guide (EPG), mobile app for both Android and iOS gadgets and supporting services.

Gerry O'Sullivan, an executive vice president at Eutelsat, said the new Cirrus platform would address growing demand for multiscreen services, EPGs and channel numbering, and take the burden of developing those capabilities off customers.

"There are channels that are effectively barred from going to market because of the investment required," he told reporters during a press briefing in London this morning. "Even operators that have launched are finding it difficult because of the need for constant innovation. All of this is something Eutelsat wants to take over and provide to customers."

Up in the Air 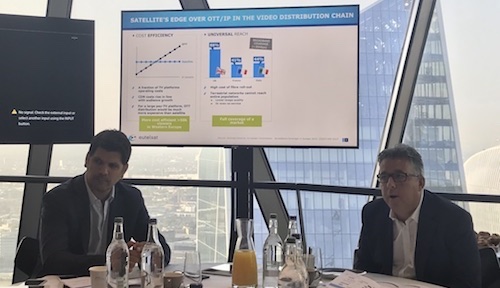 While the immediate opportunity would seem to be with customers that have not made investments in their own platforms, O'Sullivan sees interest among broadcasters that are struggling to keep existing services up to date. Eutelsat Communications S.A. is in discussions with a number of customers about Cirrus and says there is a huge demand for the technology.

The satellite company insists the cloud-based, "modular" nature of Cirrus means it can be easily scaled to suit the needs of different types of customer and adapted as new features become available. "Customers on the platform will benefit from new innovation as it arrives," said O'Sullivan. "We have an 18-month roadmap of new features."

A demonstration at London's iconic "Gherkin" skyscraper featured a mobile app with the Cirrus branding, but Eutelsat aims to work with the graphics teams of its customers to replace this with a broadcaster's own logo and images. It will also assume full responsibility for the management of the platform.

Eutelsat appears to have kept a lid on its investment in Cirrus through partnerships with other technology companies, including Nagra (for back-end support), Irdeto (for conditional access) and CenturyLink Inc. (NYSE: CTL) (for content delivery). The EPG and catch-up functionality, meanwhile, was developed in collaboration with Babeleye and Plurimedia. Just 20 internal employees worked on the platform, said Bruno Cattan, Eutelsat's terminals and systems director.

Although Eutelsat does not appear to have spent a huge amount on Cirrus so far, it expects capital expenditure to rise as it deploys the technology in a commercial setting. "It is scalable so really low capex for us now," said Cattan. "Capex will grow once we get customers and as we need to scale the video head end."

O'Sullivan did not want to comment on the size of the sales opportunity at this stage. The partnerships with such a diverse array of companies could limit the size of any direct profits from Cirrus, but the real opportunity may lie in signing up new customers attracted to Eutelsat's overall proposition.

O'Sullivan seized the opportunity to trumpet the attractions of satellite technology over other delivery channels. "DTH [direct-to-home] is a fraction of the cost of OTT [over-the-top] platforms and CDN [content delivery network] costs are going up all of the time," he said. "Cost is one reason customers keep coming back."

Unlike fiber, satellite also has a "universal reach," he claimed, and is better at handling high-definition and 4K video streams than many broadband technologies. "If this is the trend then satellite is ideally placed," he said.

Eutelsat now claims to support about 7,000 TV channels worldwide, of which nearly 1,500 are high definition, and 17 are based on 4K technology. The company made revenues of 1.46 billion ($1.7 billion) in its last fiscal year, and earnings (before interest, tax, depreciation and amortization) of about 1.3 billion ($1.5 billion). Both revenues and EBITDA were about 5% lower than in the previous year, with Eutelsat blaming unfavorable currency movements for most of the sales decline.

Eutelsat is launching Cirrus in Europe, the Middle East and Africa with support for English, French and Arabic. It plans to make the service available in other geographical markets in future, but is not disclosing further details at this stage.