Marking a big moment in its plan to become a giant in the direct-to-consumer video streaming market, Disney revealed fresh details about its ambitious premium subscription streaming service Thursday, announcing that Disney+ will launch November 12 and sell for $6.99 per month, or $69.99 per year.

Disney+, which will vastly undercut pricing on Netflix ($12.99 per month for its standard plan), viewed as the service's primary OTT rival, will feature a vast array of TV shows and movies from its Marvel, Fox, Star Wars, Pixar and other Disney-owned properties and brands. Disney expects that Disney+'s mix of content, including its new originals, will appeal to consumers of all ages. 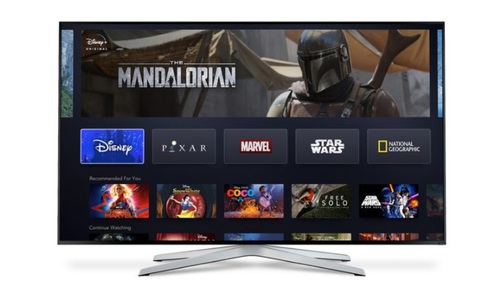 Disney+ will support a wide range of OTT and streaming platforms when it launches on November 12.

Disney revealed new details and a demo of Disney+ Thursday at its investors' day held in Burbank, Calif. "This is our first serious foray into this [direct-to-consumer] space, and we want to reach as many people as possible with it," Disney Chairman and CEO Bob Iger said.

And Disney expects the new service to attract a lot of subscribers, as it looks to expand into other regions of the globe starting late this year and into 2020. The company also hinted at future bundles that might include Hulu and ESPN+.

At the event, company CFO Christine McCarthy said Disney+ is expected to rake in 60 million to 90 million subs worldwide by the end of fiscal 2024, with some two-thirds of them coming from outside the US. Backed by Disney's marketing muscle, that will have Disney+ sub growth pacing well ahead of what some industry analysts were expecting before more details about Disney+'s pricing, packaging and global strategy were revealed.

She also sees the service reaching profitability in fiscal 2024, noting that Disney will shell out $1 billion on originals for Disney+ in fiscal 2020.

The service, which will be powered by a streaming infrastructure developed by Disney-owned BAMTech, will also have an extensive reach on streaming devices, supporting web browsers, popular game consoles, smart TVs and a mix of TV-connected TV devices. Disney did not announce if or when it might offer Disney+ through pay-TV distributors, many of which have already integrated OTT services into their set-top box platforms.

Disney+ will also offer titles in 4K/HDR, and make a sizable portion of the service's library downloadable for offline viewing.

Though some details have yet to be revealed, one top analyst covering the streaming sector said the relatively low introductory price for Disney+ will lead to a stampede of subscribers:

$6.99 for Disney+ streaming?!?! No word yet on number of simultaneous streams per account, but that is super cheap for the volume of great content they have. Get ready for a ton of subs. Content is king.

Though Disney+ could put pressure on Netflix's ability to gain and retain subscribers, another industry watcher believes that many consumers will end up paying for both:

I know the headline (which I wrote) says Netflix-killer. I think many families will add this to Netflix, for a total of $20 a month. But that may well put a lot of pressure on the cable bundle (which Disney doesn't want to happen, but is hedging...) https://t.co/Lh1a16klhN

Speaking to CNBC's David Faber, Iger was complimentary about Netflix and the value it brings to the table, but "they're still building their brand in many respects  Whereas in our case, we start with a customer relationship that, in many respects is visceral."

What does Netflix CEO Reed Hastings think of Disney+? Expect to find out next Tuesday (April 16), when Netflix announces Q1 results.