There ain't no such thing as a free lunch, as the saying goes. The adage also applies to streaming video.

Comcast this week announced it is offering Xfinity Flex, its streaming video and smart home combo product, for free to broadband-only customers. Comcast introduced Flex in May, but the new thing here is that the company clipped the original $5 per month add-on fee that caused much eye-rolling, teeth-gnashing and fist-clenching a few months ago. How dare they charge extra just for a set-top box (a.k.a. cable's blight upon the universe)! This'll never work! 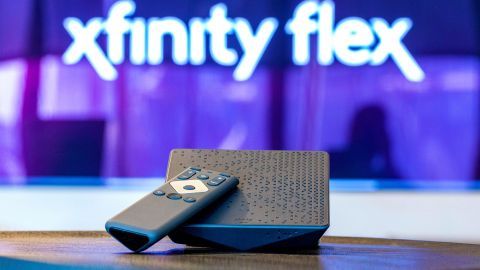 Xfinity Flex could serve as both an offensive and defensive weapon for Comcast.

Though Flex is now a free add-on to broadband-only subs -- a group that certainly includes pay-TV cord-cutters -- don't think Comcast isn't making a buck on it. There's no doubt that Comcast is getting a cut from the subscription-based and free, ad-supported apps and services offered on Flex. And there's some customer acquisition and retention value built in if Flex ends up helping Comcast gain and retain subs for what's now it's core business -- broadband.

Flex is a video streaming and smart home product that enhances Comcast's relationship with broadband-only customers. But from a strategic standpoint, it's also something else -- a Trojan Horse for its full pay-TV service. That term has an invasive stigma to it, but it's poised to be a smart move if Comcast executes this properly.

Buried in this week's announcement, Comcast notes that, later this year, Flex will allow users to upgrade to its full pay-TV service and essentially turn the device into a fully-fledged X1 box with a few button clicks. Comcast will already have a direct billing relationship with Flex customers, so there's little to no friction involved for them to add a pay-TV service. And there's even less friction to contend with if Comcast is successful in making Xfinity Flex the consumer's primary streaming and TV-connected smart home device.

Of course, there's nothing stopping Flex customers from getting pay-TV from a virtual MVPD (multichannel video programming distributor). There would be extra work involved for a customer to toggle over to another product, like a Roku box or an Amazon Fire TV device, download an app for YouTube TV, Sling TV or PlayStation Vue or another OTT-TV, and then proceed to set up the account and billing info. Switching inputs to another video streaming device seems easy enough, but it's a barrier/annoyance that is greatly underappreciated.

And this is partly why Roku's stock got thumped on Wednesday -- there's concern that Comcast's free Flex offer threatens Roku's device and platforms business. And that threat would be amplified if all of Comcast's X1 syndication partners (Cox, Rogers Communications, Videotron and Shaw Communications) follow suit with their own versions (Cox has already done this, but is still charging $5 per month extra). There's also an outside chance that Charter Communications will do this, too, either by working with Comcast or by somehow striking out on its own.

Flex's technical setup is also a smart way for Comcast to take advantage of its headless gateway architecture for the home. It allows for the operator to deploy a sleeker IP client capable of delivering all forms of video services rather than having to rely on hefty, more traditional set-top boxes to pull that off.

It's too early to know if Flex will be more successful as a broadband gainer/retainer or as a Trojan Horse that could crimp Comcast's pay-TV subscriber losses. But Flex does have more than one potential business play, as long as the product is able to gain traction and scale, and as long as Comcast can restrain itself from being an overly strict gatekeeper and be increasingly open to allowing a multitude of third-party apps and services onto its platform.

Flex is now a free add-on, but it's clear that Comcast has thought about a lot of ways to make it pay.