Taking aim at a section of broadband-only customers with a new video option, Comcast today introduced Xfinity Flex, a streaming platform that will run on an X1-powered 4K/HDR-capable device that integrates an array of OTT-delivered video and music apps and features the company's voice remote.

Xfinity Flex, a service that will cost an additional $5 per month, is being billed as an extension of Comcast's Internet strategy and a platform that can help the company gain and retain broadband customers. (See Comcast Sets Launch of 'Xfinity Flex' .)

In addition to access to free, ad-supported on-demand and live OTT services such as Xumo, Pluto TV, Tubi, Cheddar and YouTube, Xfinity Flex will tie in and integrate several subscription-based apps such as Netflix, Amazon Prime Video, Sling TV's slate of international TV packages, and premium services like HBO and Showtime. Customers will be able to subscribe to those services directly through the Xfinity Flex platform, purchase TV shows and movies from Comcast, or access titles purchased through other Movies Anywhere partners without providing any additional billing or credit card info. (See Comcast Is First Major Pay-TV Player to Support 'Movies Anywhere'.) 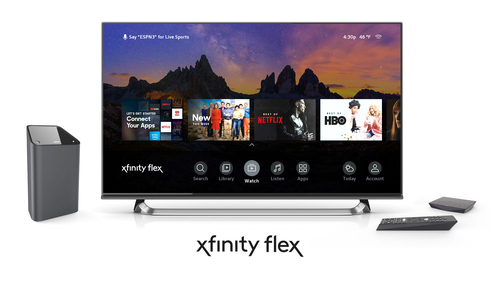 Comcast's Xfinity Flex will stream content to the TV via an X1-powered client device that's linked to the MSO's broadband gateway.

"It's really one click to subscribe, and you're watching HBO," Matt Strauss, Comcast Cable's executive VP of Xfinity Services, said Thursday at a press event announcing the new Flex offering.

Though Xfinity Flex is focused on Comcast's broadband-only subs, the platform will also provide an upgrade path later this year that enables the box to "pivot" and deliver X1 pay-TV packages and Comcast's cloud DVR service. And because it ties into Comcast's broadband service and gateways, Flex also supports xFi, Comcast's whole-home WiFi and automated home management platform.

"We see TV as more than a conduit for video, but as a dashboard for the digital home," Strauss said.

Update: Comcast also confirmed that the device that will be used for Xfinity Flex at launch is the Xi6, a 4K/HDR-capable wireless IP video client device that Comcast also uses for its regular X1 service. Per data posted about the Arris-made Xi6 device model, there's no local DVR (it is capable of supporting Comcast's cloud DVR service), though device can pause and rewind up to 25 minutes of live TV (via an internal buffer memory).

According to the Xfinity Flex site, customers will get a choice of one or two streaming boxes, which can be self-installed. The small print also shows that Flex users will need a Comcast residential Internet service delivering at least 25 Mbit/s (downstream) alongside the compatible MSO-supplied gateway. "Viewing uses your Internet service and will count against any Comcast data plan," Comcast notes.

Turning X1 into a platform play
While the move does appear to thrust Comcast into a streaming platform game that includes rivals such as Apple TV, Roku, Fire TV (Amazon) and Android TV, Strauss said the focus with Flex is not on app "tonnage," but on an aggregation and integration environment in which users can search and discover content across a curated mix of streaming services.

The announcement comes about four months after reports surfaced that Comcast was developing this new product. Strauss noted that Comcast has been testing Xfinity Flex with employees and a small set of customers, and that the product will become available on March 26 to Internet customers within Comcast's footprint. (See Comcast Vetting Video Streaming Box for Broadband-Only Subs.)

Don't expect Comcast to market this option heavily, given that the MSO prefers that its broadband customers also bundle in its X1 pay-TV services. It's "unlikely that we'll be running commercials on Flex," though it will be promoted at Comcast retail stores and through its various digital marketing channels, Strauss said. "We'll be surgical on how we go to market on this. Video is still a big priority for us."

On the call, Comcast did get some pointed questions about the $5 monthly fee for Flex and the need for a separate device, as some reporters questioned why consumers would lease a box from Comcast for $60 per year rather than simply buy a Roku player. 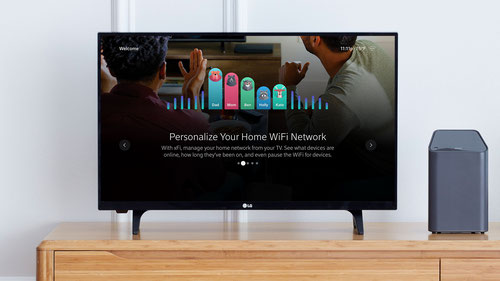 Strauss said Comcast's research showed that an almost equal segment of consumers were open to leasing a device versus buying one outright. He stressed that Xfinity Flex is "more than a piece of hardware, but a service" that integrates content, can control other devices on the home network (with xFi) alongside the value of the voice remote and a box that can support 4K and HDR.

"For $5, it was a relatively low price point for a customer to try it," Strauss aid.

Strauss said Comcast has "no ambition" to sell and market Xfinity Flex outside the MSO's own footprint. But he noted that the operator is open to engaging with its X1 syndication/licensing partners on a version they can offer within their cable service areas. X1 syndication partners include Cox Communications and three Canadian cable operators -- Rogers Communications, Videotron and Shaw Communications. (See Rogers Sparks 'Ignite TV' Using Comcast's X1.)