Looking to forge a video connection with customers who don't take its traditional pay-TV service, Comcast announced that it will offer its Xfinity Flex product for free to its broadband-only customers.

Introduced in March for an additional $5 per month, Xfinity Flex is powered by Comcast's X1 platform and integrates a mix of OTT apps and Comcast's xFi smart home platform. Xfinity Flex runs on the operator's Xi6 4K/HDR-capable, wireless IP client in tandem with a voice remote. The Xfinity Flex box connects to a Comcast-supplied broadband gateway. 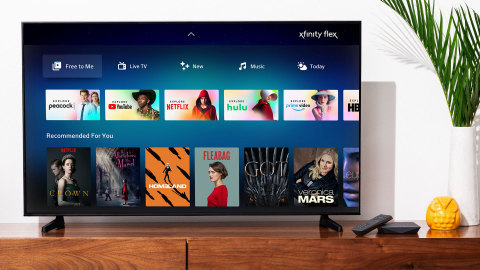 "We'll be adding as we go," Comcast chairman and CEO Brian Roberts said Wednesday at the Goldman Sachs Communacopia conference in New York.

Xfinity Flex also utilizes a recommendations engine and provides users with access to a library of more than 10,000 free, ad-supported movies and TV shows, the company said. Some of that free content comes from OTT services such as Pluto TV, Tubi and Xumo.

"Video over the Internet is more friend than foe to Comcast and this is an example of that," Roberts said of Xfinity Flex and the company's new free offer for its broadband-only subs.

Pay-TV upgrade option in development
Although Xfinity Flex is targeted to broadband-only customers, it will add a feature later this year that will allow Flex customers to upgrade to Comcast's full pay-TV service, which includes live TV line-ups and Comcast's cloud DVR.

In addition to retaining a video relationship with broadband subs while presenting a way to get Comcast's full pay-TV service, Xfinity Flex will also be used as a differentiator to help Comcast maintain and possibly accelerate its broadband subscriber growth.

And by offering Xfinity Flex for free, the platform is poised to become a bigger competitor to various retail streaming platforms from companies such as Roku, Apple (Apple TV/tvOS), Google (Android TV/Chromecast) and Amazon (Fire TV).

Comcast stressed earlier this year that the company has no ambition to sell and market Xfinity Flex outside its own cable services footprint. However, Comcast's X1 syndication partners, such as Cox Communications, Rogers Communications, Videotron and Shaw Communications, have the ability to develop and launch a version of Flex for their broadband-only customers.

Update: Matt Strauss, EVP of Xfinity Services at Comcast Cable, reinforced that thinking during a press call held after Roberts's talk at the Goldman Sachs event.

"Starting in-footprint, strategically, is where we think we're going to see the most value," Strauss said, noting that there is interest from X1 syndication partners about offering Flex to their customers. "For now, that is where we are primarily focused."

Easy, personalized app aggregation a fundamental goal
Strauss said Flex also builds into Comcast's vision around removing complexity from streaming and to help consumers find what they are looking for without having to swim through a "sea of apps."

Having to toggle through video apps individually to find specific shows, series or movies has become a "pain point" for consumers that Flex aims to solve, he said.

On that point, he demonstrated a capability in Flex that "snaps" together all of the sources by which a customer can access a particular searched title, whether it's available for free on-demand, through a subscription service like Netflix or available for digital purchase.

"It really speaks to what we believe is the future of television, which is not a future of individual apps but really a future of personalized aggregation," Strauss said.

He said Comcast also sees Flex (and by extension, X1) is becoming a "dashboard for the digital home" that pulls up weather info, connects to the home security platform and enables customers to view and manage their home WiFi systems, and not just a place to watch video.

And while Xfinity Flex must currently be connected to a Comcast-supplied gateway to deliver streaming and smart home services, Comcast will expand eligibility in the coming weeks to include broadband devices purchased by the consumer, Strauss said.