After deploying it across its own residential footprint (about 60% of the MSO's video sub base is now on X1), Comcast has since sought other deployment models for X1 in ways that drive more scale into the platform's ecosystem while also recouping some of the development costs.

The next step along that path is bringing X1 to the hospitality industry. (See Comcast Business Launches X1 for Hospitality.)

That effort, driven by Comcast's business services unit, was introduced in June, and is currently in an "extended trial period," according to Jeremy Andreoli, executive director of video product, strategy and business development at Comcast Business .

He estimates that this "nuanced" version of X1 is being tested in about ten hotels. Those on board early on include the Four Seasons Hotel that's part of the new Comcast Technology Center in Philadelphia (the hotel is slated to open in mid-2019), and the Hilton Denver Inverness hotel located just south of Colorado's capital city. 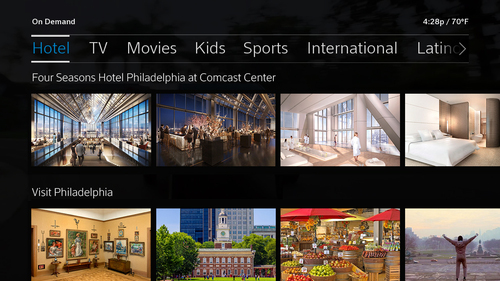 The new Four Seasons Hotel in Philadelphia, set to open in mid-2019 inside the Comcast Technology Center, will feature X1 in its 200-plus guest rooms.

The hospitality-facing version of X1 includes many of the features found in the residential offering, including a voice remote, live TV, access to a cloud DVR, a library of free VoD titles and integration with a selection of OTT apps. The hotel version of X1 also features hotel-branded channels, supports Netflix today and is set to add Amazon Prime Video sometime next year. (See Amazon Prime Video to Stream to Comcast's X1 Boxes.)

The general goal is to create a "home-away-from-home experience," Andreoli said.

It's also an upgrade opportunity, as the X1 product for hospitality does carry a premium over the legacy video products that Comcast Business offers to hotels. That includes those delivered to traditional set-top boxes or HD-capable Digital Transport Adapters (DTAs), which are one-way channel zappers. Comcast has also teamed up with third-party hospitality industry-focused companies such as Sonifi and Enseo.

The new X1 effort is taking shape as it's become clear that hotels want more advanced and customizable video platforms for their guests. Earlier this week, Spectrum Enterprise , the business service division of Charter Communications Inc. , announced a partnership with Moviebeam as part of an effort to beef up its video product for hotels. (See Charter Unit Checks In With Up-Market Video Move .) 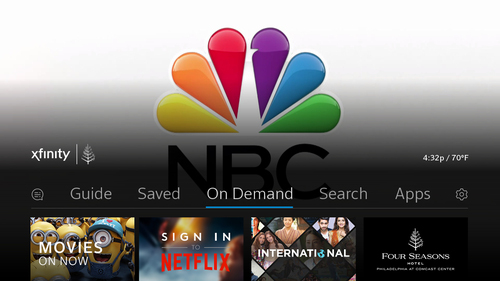 Like the residential version, X1 for the hospitality industry will allow guests to access OTT apps such as Netflix and Comcast's own VoD library.

Comcast is also working to bring more concierge-style apps and features to the hotel version of X1. By tying into the hotel's property management system, for example, X1 could enable guests to view their bill, check out and order room service. The initial phase of that integration is focused on resetting the box to clear out things like a guest's Netflix credentials and shows recorded to the cloud DVR.

Comcast is also developing an iteration of X1 for hotels that would be delivered over the operator's HFC network, a move that would enable the operator to make the offering available to a much greater number of hotels in its footprint.

Andreoli said Comcast Business is also starting to explore other opportunities with X1 that would enable the platform to deliver services to larger businesses and sporting venues. An early example where that is happening is SunTrust Park, the new home of the Atlanta Braves in the Atlanta suburbs.