That Charter is even remotely open to syndicating X1 is a bit of a bombshell given the resources and development Charter has spent on its own next-gen WorldBox devices and a cloud-based user interface for new and legacy boxes developed in tandem with ActiveVideo, the Charter-Arris/CommScope cloud video joint venture.

"We have a good relationship with Comcast," Rutledge said, when asked for an update on Charter's thinking with respect to the possibility of licensing X1. "We've had discussions with them about licensing their X1 platform and their new IP video platform. If we can make that the best platform for us, we'd certainly be willing to do that."

But Rutledge noted that Charter still likes its own UI and the ability to change and tweak it at its own pace. 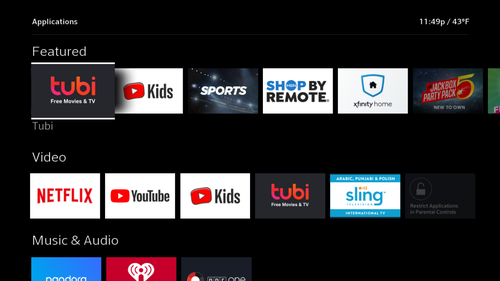 Comcast has integrated several OTT services alongside its own pay-TV offerings on its X1 set-top box platform.

At the same time, an X1 syndication play would have to "check all the boxes" in areas such as flexibility and low costs. "To date, we haven't been able to do that," Rutledge said.

Comcast's X1 syndication strategy has had some success with other Tier 1 North American operators via agreements with Cox Communications and three Canadian MSOs -- Rogers Communications, Videotron and Shaw Communications. X1 features a cloud-based guide, support for cloud DVR services, a voice remote/navigation system and integration of popular OTT apps such as Netflix, Tubi, YouTube and Amazon Prime Video at the set-top box.

Charter could be giving more thought to X1 as it seeks out ways to reduce video subscriber losses. In Q1, Charter shed 145,000 video customers, ending the period with 15.95 million. That's worse than the loss of 82,000 video subs expected by StreetAccount consensus, MoffettNathanson analyst Craig Moffett said in a research note. Charter's video base is declining at a rate of 1.7%, still below the 4% rate of the broader pay-TV industry, he added.

Rutledge acknowledged that the pay-TV business "has its challenges," but said video remains integral to Charter's product strategy.

"The macro trend, I think, is video is going to decline. The question is how fast," he said. "But we still think video is a driver for us in terms of customer creation."

He said pricing on the video "big bundle" has contributed to declining pay-TV subscriber trends. Charter has been responding with the recent launch of slimmed-down streaming packages targeted at broadband-only subs.

Jeff Baumgartner 4/30/2019 | 3:27:47 PM
Timing and depth of those discussions? I'll have to ask around to get a better sense of when such talks took place and if those discussions had a tinge of seriousness to them -- could be that Rutledge was just in the mood to be nice when asked about the potential of syndicating X1.

Edit: Or is he trying to put a scare into his current suppliers? Shape up, or we'll go in this other direction.

Maybe I'll be proved wrong, but the possibility seems remote. As I've heard it of late, Charter's not exactly all that interested in getting all that cozy with Comcast in most areas -- it's looked at Prpl while sidestepping RDK, Charter is getting behind the Generic Access Platform standard for standardized nodes while Comcast is a big nope on it... so despite the mobile operations JV between Charter and Comcast today, I was a bit stunned to hear Rutledge say that he'd give X1 a second glance... unless the current video platform is having dire issues, making X1 look more attractive than prior. JB