Spending on TV rights to show popular sports events has run amok. UK telco BT has lavished about £3.8 billion ($5.1 billion) on the Premier League, a top-flight domestic soccer competition, since 2012, according to this article in today's Financial Times newspaper (subscription required). Annual spending accounts for more than one fifth of total costs at its consumer business, says the report. (See BT, Sky Splash £5.1B on Premier League Rights.)

This leaves BT Group plc (NYSE: BT; London: BTA) on slippery turf as it battles pay-TV giant Sky for sports supremacy. It has been an annus horribilis for the telecom incumbent, as the Royal incumbent might say, with accounting scandals and downbeat forecasts chewing into profits and share price (oh, and let's not forget the pension deficit). Like a defender on a yellow card, BT might have to show some restraint during the next auction of Premier League rights, which kicks off in February. 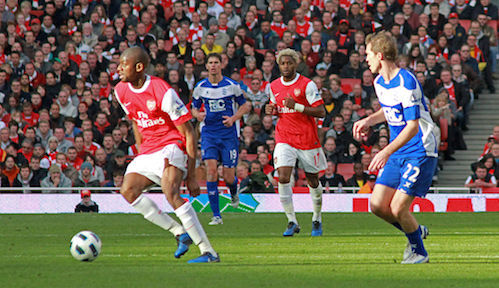 But what if BT's real nemesis is not Sky but Amazon.com Inc. (Nasdaq: AMZN)? The Silicon Valley giant has already ventured into the sports arena, snapping up future rights to screen professional tennis after outbidding Sky, which currently broadcasts those tournaments. If Amazon turns out to be a soccer enthusiast in February, as some predict, then BT and Sky face the ignominy of substitution.

BT and Sky are currently big fish in a small pond. But they are relative tiddlers next to the leviathan that at the end of September was the world's fourth-biggest company by market capitalization. Amazon's sales last year were about $136 billion. BT's, in the fiscal year ending in March, were £24.1 billion ($32.6 billion), while Sky's were just £12.9 billion ($17.4 billion). BT and Sky can only compete if Amazon -- like a gifted but apathetic striker -- cannot really be bothered.

This unpleasant truth will not do much for the self-esteem of a football-loving executive like BT boss Gavin Patterson, whose entire strategy assumes that chucking billions at footballers makes good financial sense. Without football, and a smattering of other sports, BT's TV service is an underwhelming buffet of free-to-air shows and movies that are mostly obtainable from the much cheaper Netflix Inc. (Nasdaq: NFLX) and Amazon. Without sports, its broadband service is no different from those of non-cable rivals, all of which use the same network.

And without its consumer business, today's BT looks, well, a bit naff. Its long-struggling international IT business has spent this year embroiled in an accounting scandal. Its access networks division is increasingly regulated and independent. Its wholesale business is in a funk. EE, the mobile operator it bought last year, has had a successful season. But a goal-scoring Amazon might also hurt EE by robbing it of some exclusive mobile content.

Patterson seems well aware of all this, and has recently talked about the need for a "plan B." The trouble, writes the Financial Times, is that nobody knows what that is. And he is left with few obvious choices. Because so much of BT's business is domestic, the focus on regional streamlining and efficiency that drives other European telcos would deliver much less for the UK incumbent. Bold moves into other sectors, such as Orange's foray into banking, could smack of desperation, given the present malaise, and demand resources that BT lacks. The Internet of Things is a potential money-spinner, but only if BT can expand outside its connectivity sphere -- something no telco has done with any great success. (See DT's Pan-Net Still at Start of the Marathon and Hold-Up at Orange Bank: Launch Hits Buffers.)

The prospect of Amazon-delivered armchair football may have sports-mad UK consumers performing goal celebrations in the lounge, though. Unless there is a radical overhaul of Amazon's pricing approach, customers should be able to watch Premier League matches for just a fraction of what they must spend to get a service from Sky. And if bidding by Amazon sends license fees to even giddier heights, footballers and their overseers will also be doing cartwheels in the air.

kq4ym 12/15/2017 | 10:53:30 AM
Re: Football crazy, football mad Having not been a sports fan anytime in my life, I'm always amazed that it's such a hot topic for the rest of my friends and colleagues, and now Amazon gets it's hands into the pot to churn up even more international interest, confirming that's despite my lack of interest it's big big money or most everyone.
Reply | Post Message | MESSAGES LIST | START A BOARD