Las Vegas -- NAB 2019 -- In addition to carrying Ultra HD video, support for targeted advertising and the delivery of services on TVs as well as mobile devices, the future of the broadcast TV industry is riding on the successful deployment of ATSC 3.0, a top industry exec said here.

"At this point in history, [ATSC] 3.0 really is ready for deployment, and it's time for this industry to get out of its own way," David Smith, chairman of Sinclair Broadcast Group, declared Monday during a press event in which he urged other broadcasters to get moving. "3.0 is the single biggest opportunity available to the broadcast industry." 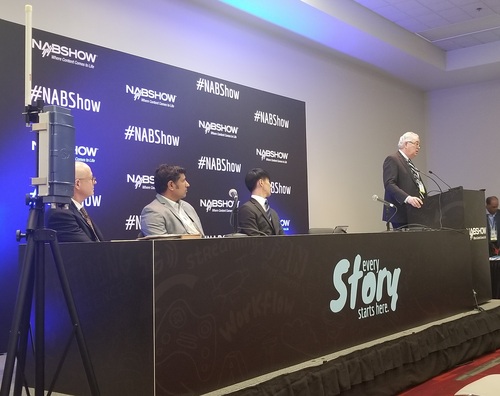 ATSC 3.0 was the topic of the day Monday at NAB during a presser with (right to left) Sinclair's David Smith; Joseph Lee, VP, head of technology innovation at SK Telecom; Parag Naik, CEO of Saankhya Labs; and John Hane, CEO of Spectrum Co. An ATSC 3.0 radio head, for deployment on cell towers, is shown on the far left.

Though ATSC 3.0 promises better pictures and sound not only to TVs in the home but also to smartphones and connected cars, Smith said the usage data collected from the new standard would be critical for broadcasters and their ability to offer relevant, targeted advertising. Without that, broadcasters remain "encumbered" by their use of Nielsen viewing diaries that are filled out by hand and are extremely limited in scope.

"The data [from ATSC 3.0] will probably be the sole opportunity that keeps us afloat for the next generation," Smith said, stressing that the broadcast TV industry needs to be more like Google with respect to the collection and marketing of its valuable data. "Our world revolves around data."

But he acknowledged that there's there's a lot more to like about ATSC 3.0 for broadcasters. Being able to tack-on subscription-based services and reaching all screens -- fixed and mobile -- with ATSC 3.0 will also be critical to the industry's future, he said.

Broadcasters need to "talk to every device in the marketplace," Smith said. "We have to be able to talk to cars We need direct access to the consumer who spends the money."

Smith called on broadcasters to get aggressive with ATSC 3.0 rollouts. "Let's do something," he said.

ATSC 3.0 rollout plan
That "something" is underway. On Monday, a large coalition of broadcast TV station groups announced plans to deploy ATSC 3.0 in top 40 US markets by the end of 2020, building on initial rollouts and tests being conducted in markets such as Phoenix, Dallas, Baltimore and Santa Barbara, Calif., among others.

The first wave of deployments will start in "several markets" this year. Participating broadcasters have identified the first stations that will convert to ATSC 3.0 service in this rollout, though that's all subject to final engineering and other approvals, including FCC license modifications.

"This is real; this is happening this year," John Hane, CEO of Spectrum Co, whose members include Sinclair Broadcast Group and Nexstar Media Group, said at the presser. "The world is mobile; people are moving."

"Today and this show is the end of the beginning, as far as I'm concerned," Smith said.

At that same press event, organizes showed off an ATSC 3.0 radio head that could be mounted on cell towers. Estimates are that one 3.0 radio head could service a 12-mile radius from a 100-foot or 150-foot tower. A study in Baltimore indicates that 50 or 60 of them could properly cover the market.

Additionally, it was announced today that a US delegation has proposed to the International Telecommunications Union (ITU) adoption of the ATSC 3.0 digital broadcast standard for use by all other countries. The proposal, developed by the Advanced Television Systems Committee, was submitted to a group at the ITU's Radio Communications Sector that develops and maintains worldwide recommendations, reports and handbooks on broadcasting services.

But there's much work to do, as only the US and South Korea have adopted the ATSC 3.0 standard. The Advanced Television Systems Committee said "accelerated action" on the US proposal is expected at the next ITU working party meetings in July.