AT&T's Stankey serves up a stinker at HBO

McDonald's buys Le Bernadin, a Michelin star restaurant in New York City, and promptly rips up the menu. Chefs are given strict instructions to get with the fast-food program and be more productive. The all-you-can-eat buffet lunch is prioritized over the balsamic-truffle vinaigrette.

Something like this has just happened at AT&T Inc. (NYSE: T). Fresh from landing its $85 billion takeover of Time Warner Inc. (NYSE: TWX), the telco has marched into HBO, the media company's finest content kitchen, and ordered mass catering in preference to a candlelit dinner for two.

John Stankey, the newly appointed boss of "WarnerMedia" (as AT&T is calling its latest acquisition), served up a stinker at a recent HBO "town hall" when he told staff about his quantity-over-quality plans, according to mainstream press reports. Creative types who have concocted award-winning shows like The Wire and The Sopranos were essentially told they don't produce enough. Look at Netflix Inc. (Nasdaq: NFLX), the fast-food giant of the content industry, was the obvious subtext. (See Netflix Kicks Tires on Pricier 'Ultra' Tier.)

If HBO is the haute cuisine of televisual fare, then Netflix is the master of cheap eats. With its Adam Sandler happy meals, and sugary snacks like Stranger Things, it has added more than 40 million customers worldwide in the last two years, and had nearly 125 million people hooked on its output in March. 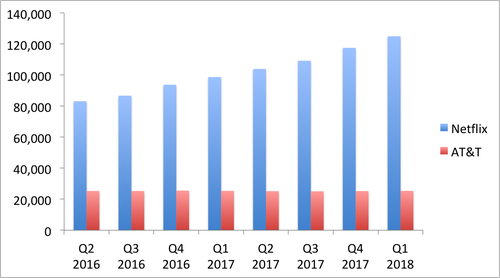 AT&T, whose own TV business has barely grown over the same period, is seemingly terrified of its Internet rival. It even dangled the bogeyman of Netflix before regulators when trying to win backing for its Time Warner takeover. If you don't approve this deal, Netflix will eventually reign supreme, was AT&T's rationale. (See AT&T Closes $84B Time Warner Takeover, AT&T Wins Big, Gets Bigger: Judge Approves AT&T-Time Warner Merger and AT&T's $85B Time Warner Takeover Is a Media Game Changer.)

An Internet company generating huge volumes of data traffic on broadband and mobile networks might sound like a good thing for a telecom operator, especially as Netflix does not (so far) own last-mile infrastructure. But not to AT&T, whose TV services reach into more than 25 million homes. As a growing number of adults and children become addicted to Netflix, more families may see little need for AT&T.

This partly explains why AT&T was so desperate to buy Time Warner. But if Stankey is serious about challenging Netflix on quantity, he may have to find some extra money for it. Netflix reportedly intends to spend between $12 billion and $13 billion on shows this year alone. HBO spent just $2.5 billion on content in 2017.

Ever heard the story about the telco that tried to mimic the Internet companies and totally screwed it up? When AT&T said it would buy Time Warner, pundits worried about such a "diversification" blunder expressed hope that telco executives would not get their dirty hands on the gourmet dishes, instead allowing HBO to continue doing what HBO has done best. With the ink barely dry on that deal, one of AT&T's most senior managers is behaving in exactly the way they feared.

In the best-case scenario, HBO gets additional funds for programming and is able to maximize output, to AT&T's satisfaction, without losing its reputation for quality. This seems about as likely as a Michelin star for McDonald's.

A more probable outcome is that HBO loses some of its most creative employees, who decide they don't much fancy working on the AT&T production line, and quality suffers.

This might not hurt AT&T's chances of becoming a more serious rival to Netflix. After all, the lack of decent content has not dampened enthusiasm for the Netflix service, judging by customer numbers. Thanks to some helpful anti-net neutrality moves by US legislators, steering consumers away from Netflix and toward AT&T may also become much easier. But for those who prefer the occasional delicacy to bingeing on junk food, it would be a depressing end to the drama. (See Senate Vote Says Net Neutrality Can Stay Around a Little Longer.)

kq4ym 7/22/2018 | 7:43:37 AM
Re: Sometimes whenever you dont have a choice, you still have a choice An example of you don't get something for free. While "a growing number of adults and children become addicted to Netflix, more families may see little need for AT&T," the mix with Time Warner might make that not so hard a rule of thumb in coming years.
Reply | Post Message | MESSAGES LIST | START A BOARD

It's more like poker than craps. HBO didn't pick Game of Thrones out of a big pile of pitches at random. Somebody knew exactly what they were looking at and why it would become a must-watch. That somebody was of the entertainment business. Probably an artsy-literary type turned business exec.  Exactly NOT the type of exec who grew up in telecom.

That is why AT&T is setting themselves up for failure.
Reply | Post Message | MESSAGES LIST | START A BOARD

Also worth noting that AT&T's over-the-top offering (unlike the satelite one) is growing, although still accounts for a very small proportion of total customer numbers.
Reply | Post Message | MESSAGES LIST | START A BOARD

Clifton K Morris 7/10/2018 | 7:34:04 PM
Sometimes whenever you dont have a choice, you still have a choice One issue with these numbers is that T-Mobile is subsidizing Netflix subscriber additions in its current rate plans. DirecTV Now is still additional plan/feature that a customer had to be sold on the features value and make a decision to be obligated to pay additional for it.

When T-Mobile added Netflix to its monthly plan, it also increased the price of the T-Mobile ONE rateplan to cover the cost of Netflix services.
Reply | Post Message | MESSAGES LIST | START A BOARD

mendyk 7/10/2018 | 11:38:09 AM
Re: Killing the golden goose I know at least one poster will disagree with me, but the truth about content production is that it is a crap shoot, and even degenerate gamblers know that once the dice roll, you usually end up with less money. This is why content production in this era has to be a means to an end. AT&T doesn't understand that and probably never will. But it will be fun to watch them try to turn Game of Thrones into a low-budget reality show.
Reply | Post Message | MESSAGES LIST | START A BOARD

Re: "Adam Sandler happy meals" -- LOL. This is exactly why I find Netflix pointless

Duh! 7/10/2018 | 11:17:09 AM
Killing the golden goose Acquiring companies are foolish to mess with business formulas and cultures at successful acquisitions, particularly before the teams have begun to gel together. Particularly when the acquistion is in a completely different industry.  As the WSJ helpfully pointed out, integration is going to be painful anyway, due to culture clash, and successful integration unlikely. When the AT&T beancounters introduce the new travel and expenses policies and compensation plans, the creative folks at Warner are going to run for the exits. History is replete with stories of iconic businesses destroyed by invading corporate bureaucacies.
Reply | Post Message | MESSAGES LIST | START A BOARD
EDUCATIONAL RESOURCES
sponsor supplied content
High Performance Video Transcoding on ADLINK AdvancedTCA Processor Blades with Intel Media SDK
Educational Resources Archive
More Blogs from Morris Lore
Banning Trump and Parler is not for big tech to decide