Apple's new subscription VoD service, called Apple TV+, will debut in more than 100 countries on November 1 and start at $4.99 per month.

To help prime the pump, a free year of Apple TV+ will be included with the purchase of any new iPhone, Mac or Apple TV box, company CEO Tim Cook announced Tuesday at the company's new products event.

Cook said an initial slate of original shows will debut on Apple TV+ on November 1, with more added to the mix every month. Those on tap early on include The Morning Show, Dickinson, See, For All Mankind and The Elephant Queen, among others. 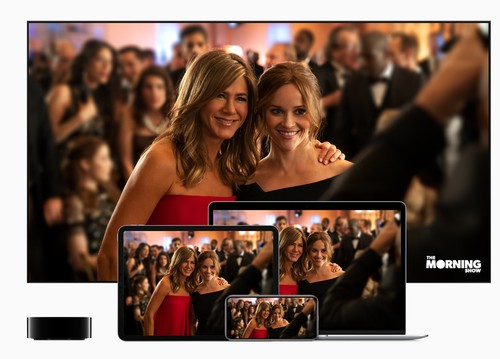 The Morning Show, a drama starring and executive produced by Reese Witherspoon and Jennifer Aniston, and starring Steve Carell, will be among the originals offered when Apple TV+ debuts on November 1.

Apple is going inside and outside its own ecosystem to distribute the ad-free Apple TV+. The service will be offered on the Apple TV app for iPhones, iPads, Apple TV boxes, the iPod Touch, Macs and on web browsers at tv.apple.com, as well as via "select" Samsung smart TVs. Plans are also underway to offer the Apple TV App on Amazon Fire TV devices, LG smart TVs, Sony and Vizio platforms and on Roku players and Roku TVs.

Under a "family" subscription model, up to six family members can share one Apple TV+ subscription.

The pricing and launch date for Apple TV+ arrive almost six months after Apple announced plans for the SVoD offering.

Initial pricing on Apple TV+ is about $5 less than some analysts were expecting. Apple was possibly forced into the initial price on Apple TV+ given that Disney will hawk Disney+, an SVoD service featuring content from Marvel, Pixar, Star Wars and other Disney-owned properties and franchises that will launch on November 12, for $6.99 per month.

WarnerMedia has not announced pricing on HBO Max, a new SVoD service that will feature content from HBO, Turner and other WarnerMedia properties. However, HBO Max will reportedly cost a little more than HBO Now, which currently sells for $14.99 per month.

Apple has not pinpointed how much it will spend on original programming for Apple TV+, but The Financial Times reported recently that Apple has set aside about $6 billion for original TV shows and movies over an undetermined amount of time. By comparison, Netflix is expected to spend $9.2 billion on programming for 2019 with Amazon spending $5.8 billion, according to recent estimates from MoffettNathanson.

Apple is reportedly to introduce a new generation of the Apple TV box. Light Reading will update the story as those details emerge.

Update: Nope, Apple did not announce a version of Apple TV to succeed the current-gen, 4K-capable box introduced in the fall of 2017.