Apple has invited media to an event slated for Monday, March 25 that is expected to mark the introduction to the company's long-anticipated streaming service.

As is the Apple way, the invitation, widely reported on this week, didn't shed much light on precisely what's in store. "It's show time," the invitation reads, then goes on to note that the "special event" will take place at the Steve Jobs Theater in Cupertino, Calif., at 10 a.m. PT on March 25. Apple is expected to live-stream the event as well. 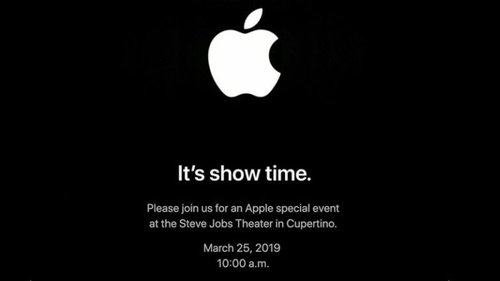 CNBC reported last month that Apple's new streaming offering will be a video aggregation service that will feature Apple-produced originals alongside other content, though some popular offerings, such as Netflix, Hulu and HBO, might not be included out of the chute. Apple is also expected to introduce a news subscription service at the March 25 to-do. (See Apple Nears Launch of Video Streaming Product Sans Netflix  Report.)

In addition to providing free access to Apple originals on the company's own platforms, such as the Apple TV, the new offering will also make it easy for users to tack on and pay for other OTT services, the report added. If that's Apple's angle, it would share some similarities with the approach taken with Amazon Channels as well as The Roku Channel, which recently complemented a library of free, ad-supported titles with direct integration with subscription- based OTT services. (See Roku Targets Amazon With 'Premium Subscriptions'.)

The expected launch also comes in the wake of recent moves by Apple to enable iTunes to be supported on various non-Apple devices, adding more conduits for its coming slate of originals. (See Apple's Walls Come Tumbling Down With Samsung TV Tie-Up.)

Last month, analysts at Jefferies said there is likely to be upside with Apple's new video play as the company looks for services growth to offset iPhone unit declines. But the analysts warned that Apple's "unfavorable economics" for video -- they anticipate a revenue share of 30% that's similar to Apple's cut in the App Store -- "might discourage third-party content producers from participating, limiting its growth potential."

The Jefferies analysts see services representing 30%-plus of Apple's overall business by 2023, but are not convinced that streaming will "meaningfully reaccelerate Services growth" at Apple. Based on an assumption that Apple charges $15 per month and gets its 30% cut from content producers, Apple would need to have an astonishing 250 million subs on its platform to represent just 5% of overall revenue by 2023, they predicted.

"Net, we are not yet convinced that Streaming can cause an inflection in company level growth," they wrote.