Aiming to appeal to both pay-TV customers and cord-cutters alike, and stay relevant in the hotly contested streaming device market, TiVo this week introduced its latest connected DVR product line, the TiVo Edge, along with details about a soon-to-launch, ad-supported streaming service called TiVo+.

The TiVo Edge supports 4K video resolution and Dolby Vision High Dynamic Range, but comes in two variations: one model for digital cable TV customers; and another for cord-cutters or other consumers who don't take a cable TV service.

The cable-optimized version contains a CableCARD slot for an operator's digital video security module, a 2 terabyte hard drive and six tuners, while the cord-cutting option is optimized for an over-the-air digital TV antenna and is equipped with a 2 TB hard drive and four tuners.

TiVo has built Edge models for cord-cutters and cable pay-TV subs, but both versions will require a subscription to TiVo's underlying service plan.

Taking a page from the Roku platform playbook, the TiVo+ service, to launch in the "coming weeks," will be integrated with the TiVo platform and stream in a blend of free, ad-supported OTT services. Initial TiVo+ content publishers include Xumo and Jukin Media for streaming channels such as FailArmy and TMZ Outside TV+. Other publishers on board include Gannett, Loop media, Newsy and Tastemade, among others. 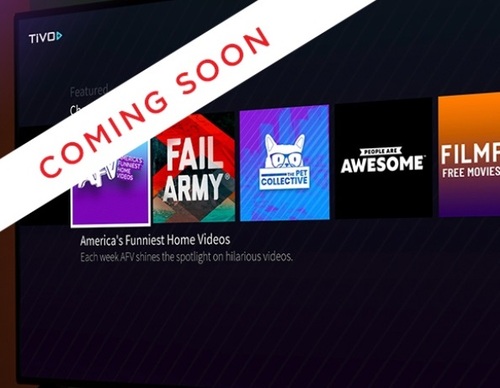 Set to launch in the coming weeks, TiVo+ is a free, ad-supported service that features content from a wide range of content partners and publishers.

Those services build on TiVo's plan to monetize its platform through anonymized user data and advertising. Last month, the company confirmed it is in the process of launching a new product that dynamically inserts pre-roll ads in DVR recordings. TiVo customers will be able to skip those ads much in the same way they can skip traditional TV ads that appear in recorded shows. Notably, certain ad-free networks won't be fitted with pre-roll ads.

TiVo is expanding its device lineup and introducing the new TiVo+ streaming service as the company prepares to separate its products business and its licensing/intellectual property business. The launch of TiVo's new lineup is also a clear indicator the company plans to stay in the retail market even as it continues to cultivate partnerships with cable operators and other pay-TV providers.